Police have released CCTV footage of a car they want to trace in the hunt for a man suspected of attempting to kidnap three teenage girls in less than a week.

Detectives say the suspect tried to force three schoolgirls into his car in separate incidents in Salford, Greater Manchester, including two on the same night.

The youngsters, two aged 15 and one aged 13, were left ‘extremely shaken up’ by the incidents, which took place in different locations in the city.

During one terrifying encounter, which happened at 6.15 pm on November 21, a 15-year-old girl was approached by the wanted man at a bus stop in Monton Green. 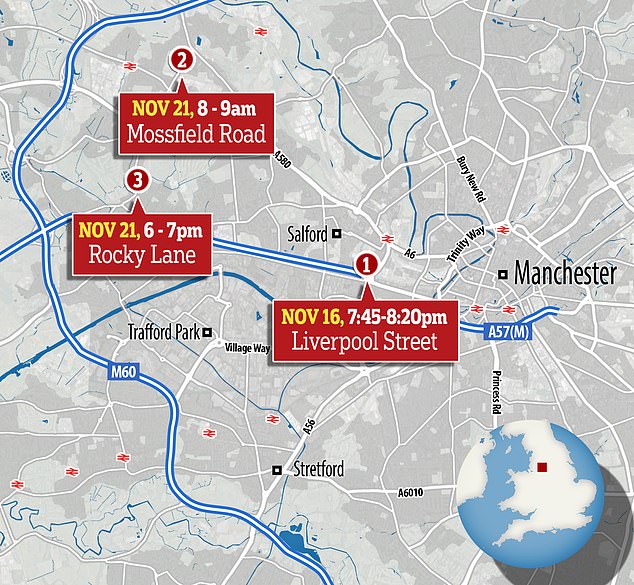 Detectives say the suspect tried to force three girls into his car in separate incidents in Salford, Greater Manchester, including two on the same night. Police released CCTV footage showing a black Vauxhall Astra on Monton Road during the time of the first attempted kidnapping

Police probing the kidnapping attempts said he first ‘made advances’ towards her before trying to ‘physically get her to go’ with him in his ‘dark-coloured hatchback car’.

The force believed the man had made another kidnap attempt just hours later, and another one five days earlier on November 16.

They have released a video of a vehicle of interest, which they identified as a black Vauxhall Astra, and hope the distinctive silver wing mirror cover might help motorists identify the car.

Two brief clips show an Astra prowling the rain-sodden streets of Rocky Lane and Monton Road in the Eccles area of the city, while the third is from Folly Lane, Swinton.

Detective Inspector Chris Horsfield from Greater Manchester Police said: ‘The victims have been left extremely shaken up by this encounter and it’s very important that we get this man identified and off the streets as soon as possible.

‘We believe that the man we want to speak to may have been driving a dark-coloured hatchback car, but we need to review dashcam footage to identify the make, model and registration plate.’ 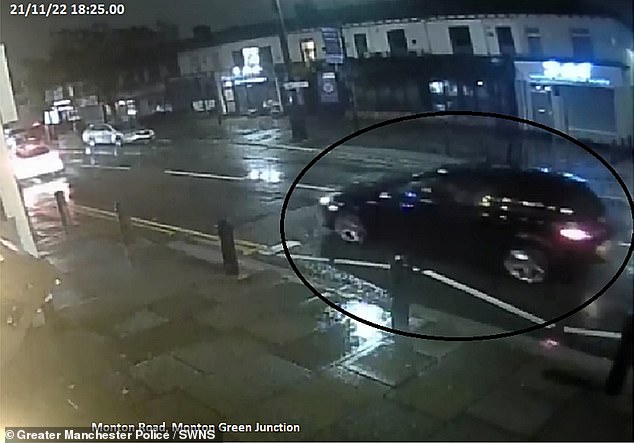 Do you have dashcam footage that could help with the investigation?

Officers are keen to speak to anyone with dashcam footage of three different locations, they said.

The first is around Rocky Lane, Monton Green and Monton High Street on November 21 between 6pm and 7pm.

The second is the area of Mossfield Road and Ackworth Road, Swinton, on November 21 between 8pm and 9pm.

The third is Liverpool Street, between Fitzwarren Street and Albion Way in Salford, on November 16 between 7.45pm and 8.20pm.

Officers are requesting that you email [email protected] with your name and contact number.

They will email you back with instructions to upload your footage for them to analyse.