Texas woman tricks ‘porch pirate’ by leaving fake package filled with dirty diapers – only for thief to take revenge by smearing her door with them, then dumping cow manure on her car

A Texas mom tricked a serial porch pirate into stealing a fake delivery filled with dirty diapers – only for him to return and smear them on her door in revenge.

Gabriela O’Hearn, from Austin, was further horrified to find that half an hour later the thief came back with a ‘giant bag of cow manure’ in a second act of revenge.

The feces were smeared over vehicles on the family’s driveway and all over the porch.

‘It was a really long day of cleaning a lot of cow feces,’ the 37 year-old told KXAN.

Video captured on a doorbell camera shows a masked thief hurrying towards the front door with a white object in hand before rubbing it over the door and doorbell camera. 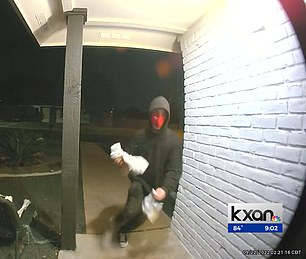 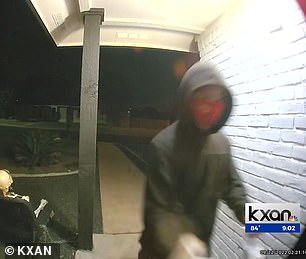 Business-owner O’Hearn, who works full-time and is now pregnant, has been dealing with ‘porch pirates’ in her Austin neighborhood for months.

She says she believes the same man was behind most of the recent thefts she had suffered – and that he was the thief who picked up the booby-trapped package.

At least 12 of her neighbors said that the same thieves have been targeting their homes too.

O’Hearn and her husband decided to take action by leaving their kid’s dirty diapers in a box on their porch, disguised as a recent delivery. 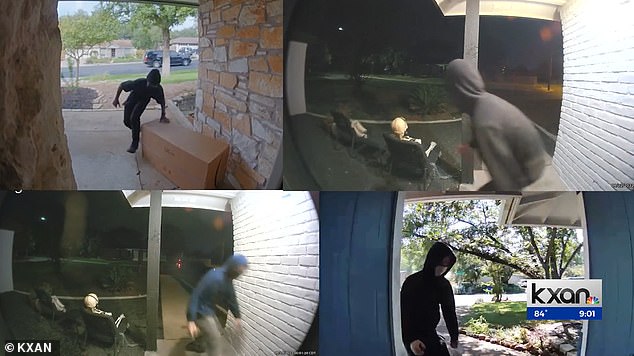 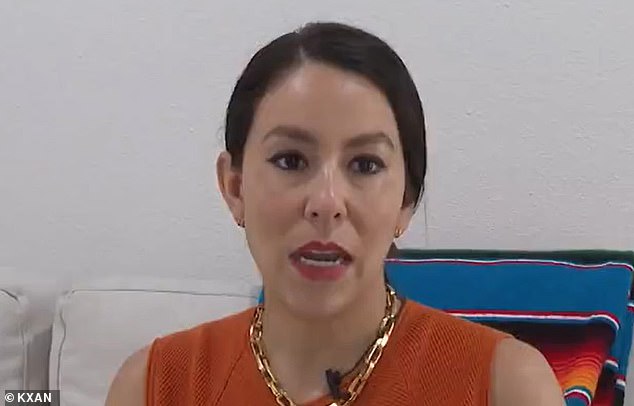 Gabriela O’Hearn, 37, became fed up with ‘porch piracy’ in her Austin neighborhood so decided to take action

O’Hearn said: ‘When they discovered it was a bunch of dirty diapers they came back and smeared those diapers all over the front door.

‘We need to stop this now, especially before the holidays get started.’

O’Hearn said the thieves would drive around in a black Chevrolet Suburban with no registration plates.

Round Rock Police Department have advised residents not to confront ‘porch pirates’ but have said that smearing manure on vehicles would fall under ‘criminal mischief’.

She says she was only able to deter porch pirates from targeting her again by shouting ‘I have a baby.’ 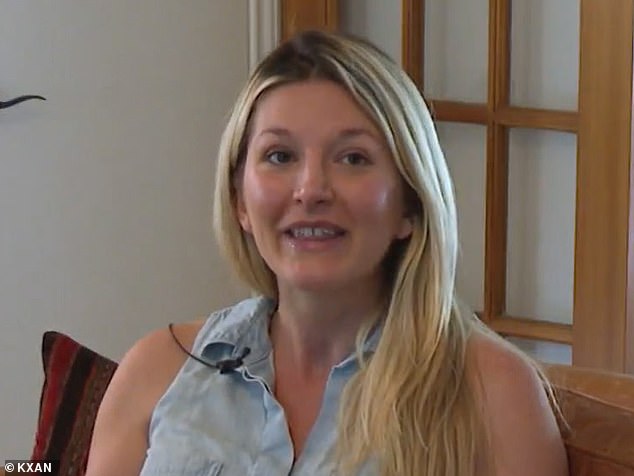 Round Rock resident Britany Walker was also a victim of ‘porch piracy’ but was able to deter thieves by shouting at them: ‘I have a baby’

In 2019 Texas introduced new laws to clamp down on ‘porch piracy’ but they seem to have had little effect. A article published by the Houston Law Review in 2019 found that ‘there is little evidence that these laws are resulting in their desired deterrent effect’ and said ‘the law should facilitate more private action’.

During the holidays Round Rock police also launch ‘Operation Front Porch’ in which people can have their packages delivered to the police department to avoid leaving them on the porch.

According to Commander Tom Sloan the initiative was effective. He said: ‘What safer place to have your package delivered to than the police department?’

O’Hearn has no regrets: ‘Its a tool for me. I have a toddler. I work full time and I have another one on the way, so I use this as a survival tool.

‘There has to be end. It’s just not OK in my book anymore.’