President Xi Jinping has finally admitted the mistakes of his draconian Zero Covid policy which failed to contain the virus and sparked the country’s first widespread mass protests in decades.

The premier acknowledged ‘unprecedented difficulties and challenges’ in his New Year’s Eve address to the nation, and said it was ‘only natural’ that his harsh lockdown measures were met with resistance.

After the huge unrest, Xi dropped the Zero Covid measures on December 7 but his new strategy of living with the virus has caused infections to skyrocket, with infections currently peaking in Beijing.

In the first 20 days of December, the government’s top health authority estimates a staggering 248million people, equivalent to 18 per cent of the population, contracted the virus. 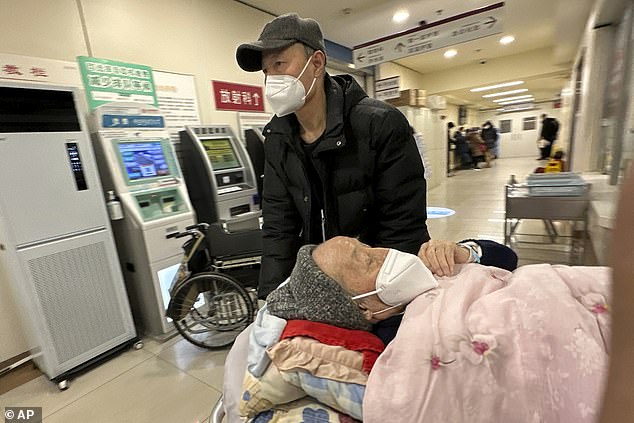 Hospitals have been rammed with patients while crematoriums have been struggling to cope with the death surge, despite loyalist officials claiming only one death was recorded today.

He said China is now in a new phase of Covid control which is ‘optimised’ to protect lives and the economy.

He said: ‘Since Covid-19 struck, we have put the people first and put life first all along.

‘With extraordinary efforts, we have prevailed over unprecedented difficulties and challenges, and it has not been an easy journey for anyone. 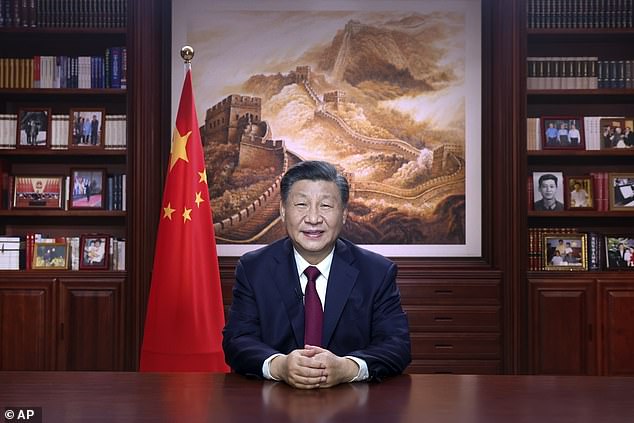 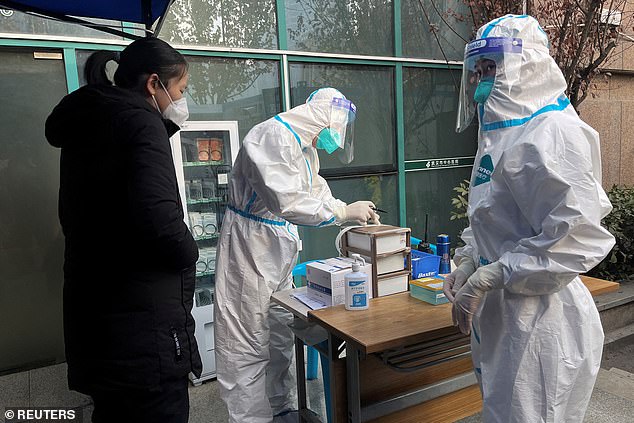 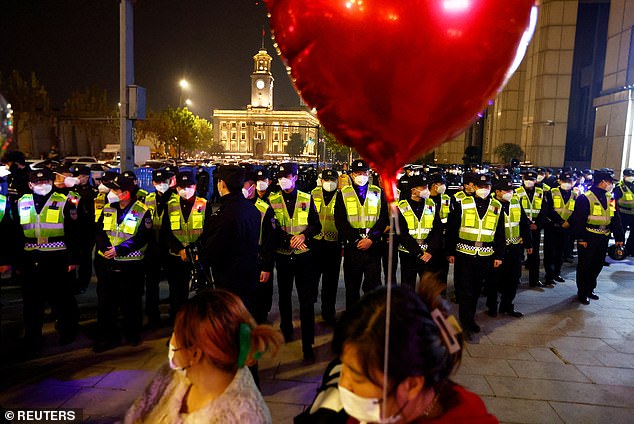 ‘We have now entered a new phase of Covid response where tough challenges remain.’

He added: ‘What matters is that we build consensus through communication and consultation.

‘Let’s make an extra effort to pull through, as perseverance and solidarity mean victory.’

The speech was a major shift from the celebratory tone in October when he secured a third term in power at his party congress.

Now, the country could see up to 25,000 deaths a day from the virus in January, research firm Airfinity Ltd. said.

About 9,000 people in China are probably dying each day while cumulative deaths since December 1 have probably reached 100,000, with infections at 18.6 million, they said.

Airfinity, which is based in Britain, expects China’s cases to reach their first peak on January 13, with 3.7million daily infections. 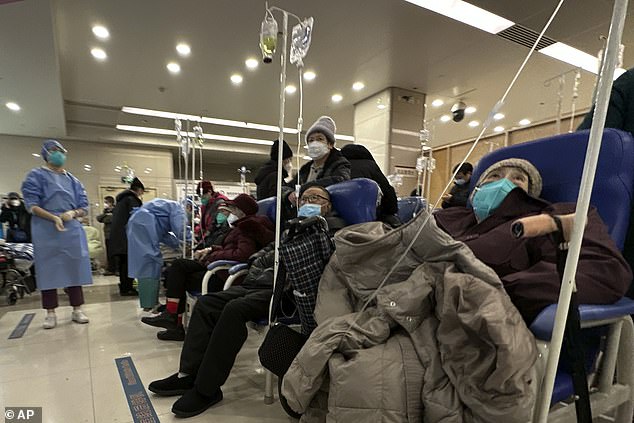 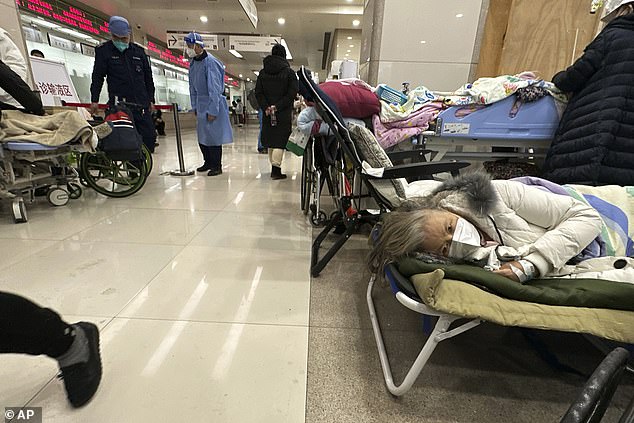 The abrupt end to testing and other measures came as hospitals were swamped with feverish, wheezing COVID-19 patients

But Chinese officials claim only 5,250 deaths have been recorded throughout the entire pandemic, compared with more than a million in the US, and 11,000 in neighbouring Hong Kong, in a population of 7.4million.

China has said it only counts deaths of patients caused by pneumonia and respiratory failure as being related to Covid.

Among those who gathered to sled or ice skate on a frozen lake in the capital’s Shichahai Lake Park were some upbeat about the opening-up.

‘After the end of this lockdown, we don’t have to scan the health code any more, nor do we have to check the travel code,’ said one of those in the park, Yang, who gave only one name.

Also at the lake was Zhong, a 22-year-old college student, who said he had stayed home for two or three weeks after getting infected. 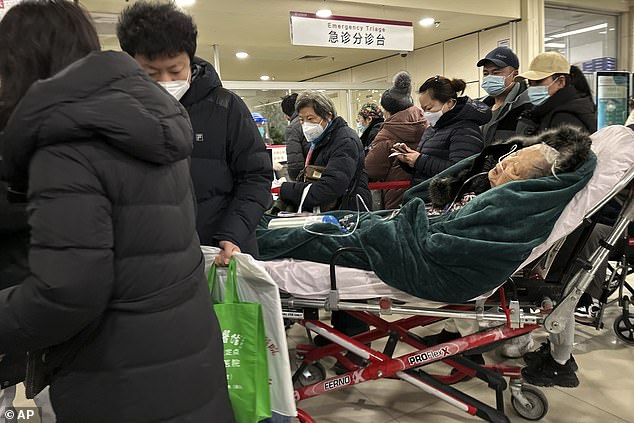 The country could see up to 25,000 deaths a day from the virus in January, research firm Airfinity Ltd. said 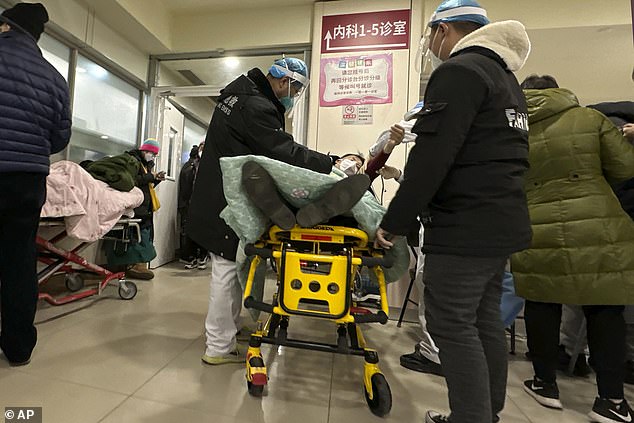 Chinese officials claim only 5,250 deaths have been recorded throughout the entire pandemic 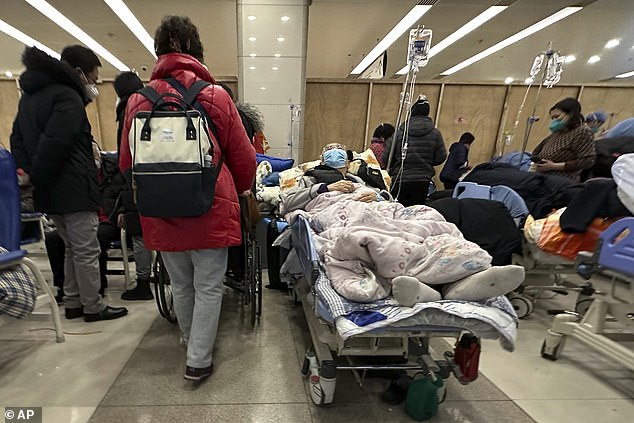 ‘Now I can go out and it’s good timing for the New Year’s Day holiday,’ he added. ‘I want to go around in Beijing, have a look and feel the festive mood.’

Monday was a public holiday, but traffic in the capital has built up again in the last few days as people flock to outdoor sites, although business is still slow in some smaller, confined locations, such as restaurants.

The owner of a Beijing seafood restaurant said patrons had not returned to full strength.

‘I expect this situation to linger through the Lunar New Year holiday,’ said Chen, who gave only his surname. ‘I am counting on business to be more normal after the holiday.’

In the central city of Wuhan, where the pandemic began three years ago, people were not as anxious any more, a man surnamed Wu told Reuters.

‘Work production, life and entertainment are all getting back to normal levels,’ added Wu, a tutor at a private training centre.

As expectations for holiday travel grow, authorities at Tibet’s spectacular Potala Palace said it would open for visitors from January 3, after shutting last August due to an outbreak.

Some hotels in the southern tourist resort of Sanya are fully booked for Lunar New Year, media have said.

In recent days state media have sought to reassure the public that the outbreak was under control and nearing its peak.

Infections in the cities of Beijing, Guanzhou, Shanghai and Chongqing are close to ending, news outlet Caixin said on Sunday, citing researchers in the Chinese commercial hub.

But infections will peak in the urban regions of Sichuan, Shaanxi, Gansu and Qinghai in the latter half of January, they added.

More than 80% of those living in southwestern Sichuan have been infected, the province’s Center for Disease Control and Prevention has said.