A new teaser airs in the US: Why isn’t Archie a prince?

A new teaser has just aired in the US promoting the prime-time special. In this clip, shared by ITV royal news editor Chris Ship (which he appears to have filmed on his mobile phone), Oprah asks Meghan why her son Archie was not given the title of Prince like his father.

Meghan’s answer is not aired … yet.

‘Duty means everything’: Front page headlines in the UK

It’s just after midnight Sunday in the UK (about an hour before the interview airs there), but we’re already seeing a taste of the front pages of Monday morning’s newspapers via Twitter.

If Harry and Meghan were hoping their big interview would turn hearts and minds in the UK in their favour, the answer is, probably not.

William and Catherine, the Duke and Duchess of Cambridge, have marked Commonwealth Day with this clip on their official Instagram account.

Here, they speak with Dr Zolelwa Sifumba about healthcare workers on the frontline of the COVID-19 pandemic.

Sources say the Duke and Duchess of Cambridge privately remain “hopeful of a reconciliation” with their brother and sister-in-law despite the prospect of criticism in the Oprah interview.

A friend of the Cambridges, speaking on the condition of anonymity, said: “There will always be bumps in the road but they’re a family and families come through these things. They both remain hopeful of a reconciliation with Harry and Meghan. It has been very difficult for both sides and there has been a lot of sadness over what has happened but ultimately they want things to improve between them in the fullness of time.”

The Duchess of Cambridge, 39, is said to have told friends that she does not believe it too late to “pull them back in.”

with The Telegraph, London

Before Harry and Meghan interview, Queen speaks of ‘selfless dedication to duty’

The Queen spoke of “selfless dedication to duty” in a message broadcast just hours before Harry and Meghan’s tell-all television interview airs in the United States.

The 94-year-old monarch will be briefed on the couple’s encounter with Oprah Winfrey when she wakes at Windsor Castle on Monday morning but reportedly has no intention of watching it.

The interview airs in Britain at 1am on Monday morning, local time. 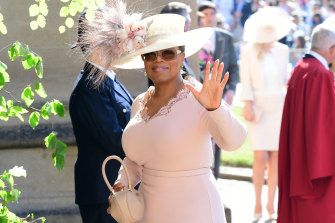 Oprah at the couple’s royal wedding in 2018. Credit:Getty

But Winfrey was really an inevitable choice. She is a friend of the pair (she went to their 2018 wedding) and has a history of conducting royal interviews. Sarah Ferguson held two cringeworthy confessionals with Winfrey, including a declaration that she’d reached “the gutter” in seeking £500,000 ($900,500) from an undercover reporter in exchange for access to Andrew. Oprah had first sought an interview with Meghan in early 2018 before her wedding to Harry but was knocked back.

‘In no way should they disparage the royal household,’ says Monarchist League

Australian monarchists say Harry and Meghan’s decision to leave the royal family means they are essentially “individuals” but still have a special responsibility not to demean the Queen.

Speaking ahead of the interview, Australian Monarchist League national chair Philip Benwell said the pair held no special status in Australia and with the exception of the Invictus Games in 2018 had only ever visited as representatives of the monarchy. 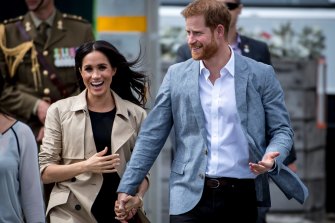 Harry and Meghan in Melbourne during their 2018 royal tour downunder. Credit:Eddie Jim

“Whilst the duke is the son and the duchess the daughter-in-law of the Prince of Wales, by their own decision they have left the royal family as working royals. Accordingly, as far as Australia is concerned, they are individuals,” Benwell said.

“However, the Duke of Sussex was born a prince and is the grandson of the Queen. Until the birth of the children of the Duke of Cambridge, he was third in line to the throne. As such he and his wife enjoy a privileged status.

“In no way should they use that status to disparage the royal household and in so doing demean the Queen. At 94 years of age with her husband, the Duke of Edinburgh in hospital, the last thing she needs is public discontent amongst her family. The Duke and Duchess of Sussex should at all times consider the position of Her Majesty before they give any public interviews.”

Benwell said Australia should focus instead on Commonwealth Day, which falls on March 8. The Queen and other members of the royal family have recorded messages paying tribute to frontline health workers and others involved in tackling the coronavirus pandemic.

An Ipsos poll conducted for The Age, The Sydney Morning Herald and Nine News in January found support for an Australian republic had fallen to lows not seen for more than four decades.

The online poll of 1222 people nationally found 40 per cent were opposed to a republic and only 34 per cent in favour – the lowest recorded by Ipsos and Nielsen polls since 1979.

Support for a republic has steadily ebbed since a peak in December 1999 – when 57 per cent of Australians were in favour – immediately after the failed 1999 republic referendum.

In the words of Oprah herself, “Today’s the day”.

Welcome to our live coverage of the biggest royal interview since Princess Diana’s famous 1995 tell-all with the BBC’s Panorama program.

Prince Harry and Meghan, the Duchess of Sussex, have sat down with American talk show queen Oprah Winfrey for a two-hour special which promises to be explosive. 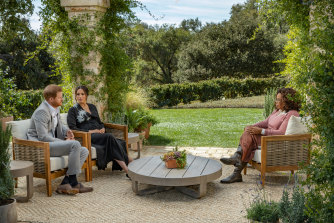 Oprah Winfrey interviews Prince Harry and Meghan, The Duke and Duchess of Sussex, for a CBS Primetime special.

The interview had initially been planned as a 90-minute television special but was lengthened because Winfrey and US broadcaster CBS felt the material was too good to cut.

The couple split from the monarchy in January 2020 amid tensions with their family and the British tabloid press and the feud has only worsened since.

As our colleague Michael Idato reports, the interview was initially conceived as an attempt to present the couple’s side of a year of largely negative media coverage but there are now growing fears the strategy may backfire and instead ignite a feud that would make the “War of the Waleses” – the very public falling out between Harry’s parents in the 1990s – pale in comparison.

The interview will begin with Winfrey and Meghan alone, discussing her experience joining the royal family, her treatment by the UK media and the birth of the couple’s first child, Archie. In the second part, Meghan will be joined by Prince Harry to discuss their future, including the upcoming birth of their second child. Winfrey has said that “nothing was off limits” in the interview.