A man who was arrested for domestic violence is now facing an attempted murder charge after he shot a police officer in Argentina.

Diego Gurich, 40, disarmed sergeant Lucas Sanabria outside Mercante Hospital in the Buenos Aires city of José C. Paz and fired at him three times, striking him once in the abdomen on Thursday.

According to digital news outlet Infobae, Sanabria the bullet exited through his right abdominal area and caused damage to his large and small intestines.

Gurich was charged with attempted aggravated homicide by use of a firearm. 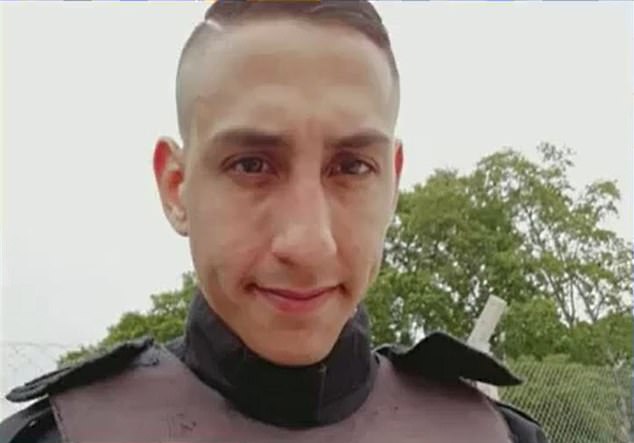 Sergeant Lucas Sanabria was shot in the abdomen after he was disarmed by a handcuffed suspect who was being escorted to a hospital in Buenos Aires, Argentina, on Thursday. The bullet went through the abdomen and caused damages to his large and small intestines. He underwent surgery and is in stable condition 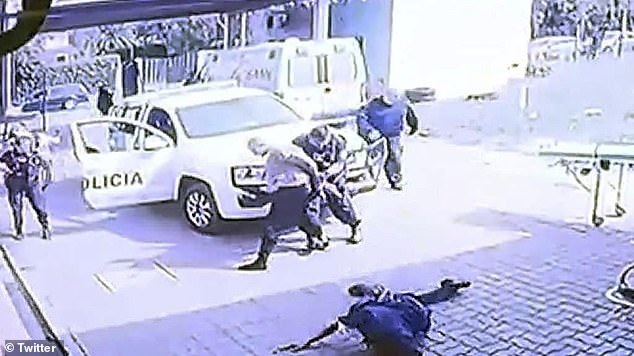 A police officer removed the gun from Diego Gurich (top center) moments after he shot Lucas Sanabria (bottom center), a sergeant with the police department in the Buenos Aires city of José C. Paz

Gurich was taken into custody after a woman called 911. Authorities responding to the call were able to track down the suspect and arrested him on a street.

As part of the arrest protocol, the cops transported Gurich to Mercante Hospital to undergo a routine medical exam before being taken to the police station for processing.

A surveillance camera mounted outside the hospital entrance showed a handcuffed Gurich being escorted by Sanabria before he turned spun him around and managed to grab the police officer’s service gun.

Gurich fired a shot which sent Sanabria tumbling to the ground and nearly struck a female nurse who was walking out of the medical facility entrance before he shot in Sanabria’s direction two more times.

The wounded cop’s partner quickly took the gun away from Gurich and a pedestrian intervened to help the agents restrain him. 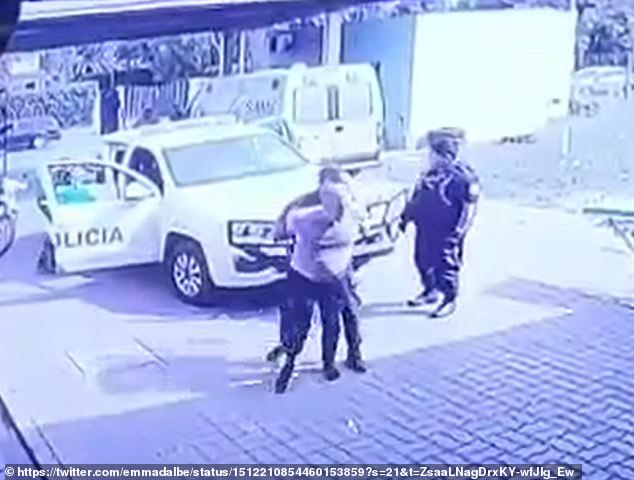 Diego Gurich is led by police officer Lucas Sanabria to the entrance of Mercante Hospital in Buenos Aires, Argentina, on Thursday. Gurich somehow managed to remove the service weapon from Sanabria’s holster and fired three shots, including one that struck the agent in the abdomen 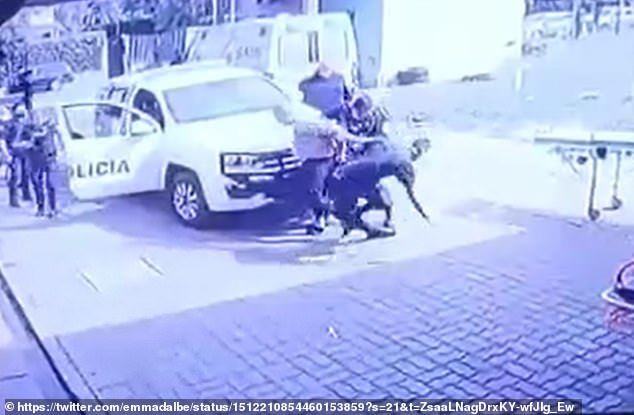 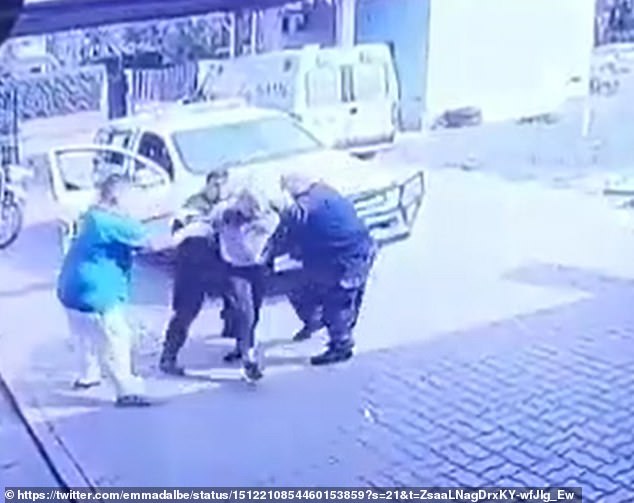 Pedestrians assist a police officer with restraining Diego Gurich after he shot a sergeant outside a hospital entrance in Buenos, Argentina on Thursday

The shooting incident took place just hours after police officer Hugo Daniel Báez, 33, was shot dead at a bus stop in the José C. Paz city limits with the town of Moreno.

Báez, a father-of-two, was on his way to the police station when he was approached by two men who attempted to mug him.

The cop ordered the suspects to stand down, but he was shot once in the neck and once in the abdomen before the shooters fled.

Authorities later located the fallen officer’s backpack and arrested two men aboard a motorcycle similar to the one that had fled the scene of the shooting.

Police are still being investigating the pair to determine if they are the two men seen on security cameras robbing and killing Báez.