A massive, 50-year-old great white shark has been tagged off the coast of Nova Scotia, in a rare encounter that scientists compared to a royal visit.

Researchers with OCEARCH, an NGO dedicated to tracking great whites on the Atlantic Ocean, reported tagging a huge female shark as part of their studies over the weekend.

“We named her ‘Nukumi,’ pronounced noo-goo-mee, for the legendary wise old grandmother figure of the Native American Mi’kmaq people,” OCEARCH wrote on Facebook. The organization also dubbed her “Queen of the Ocean” in a separate post on Twitter.

The mature female shark weighed in at a whopping 1.6 metric tonnes (3,541 pounds) and measured about 5.2 metres (17 feet, 2 inches) long. That’s well above the average size of an adult great white, which usually measures between 4.5-4.8 metres long.

Researchers hauled the shark out of the water last week, tagged it, then released it safely back into the ocean.

They say the shark is the largest they’ve tagged in the North Atlantic to date. 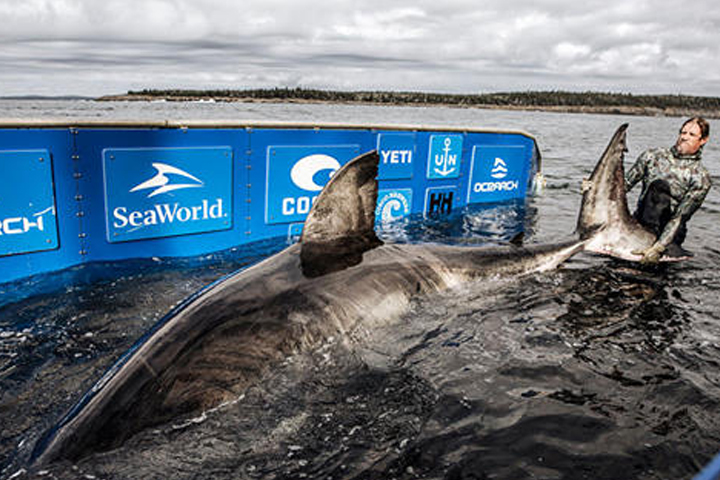 Fischer described Nukumi as a “proper ‘Queen of the Ocean,’ matriarch of the sea, balance-keeper of the future. A grandmother.”

“It’s really humbling to stand next to a large animal like that,” he said. “When you look at all the healed-over scars and blotches and things that are on her skin, you’re really looking at the story of her life, and it makes you feel really insignificant.”

Fischer hailed West Ironbound Island as a great spot for examining great whites at various stages of their development.

“The diversity of the sharks is very interesting here,” he said. “Both males and females, both immature and mature.”

OCEARCH researchers have tagged dozens of sharks over the course of their expedition. The trackers ping every so often and feed the data back to OCEARCH’s dedicated website, where anyone can follow the sharks’ migratory patterns online.

The system has yielded a wealth of information about great whites, including their habit of migrating between the waters of Florida and Nova Scotia. The project has also revealed some of the sharks’ favourite breeding grounds.

Users can track all of the sharks or simply follow Nukumi on her royal travels.

OCEARCH’s latest big fish still pales in comparison to Deep Blue, another mature female great white that’s been spotted a handful of times off the West Coast. That shark is said to be about 6.1 metres (20 feet) long.

Great whites are descended from the largest known ocean predator in history, carcharodon megalodon. The megalodon lived between 3.6 to 23 million years ago and measured roughly three times as long as a modern great white.

If great whites like Nukumi are the queens of the ocean, then megalodon would have been empress of the waves.