Diamond-rimmed spectacles that belonged to mystery Indian Mughal royalty go up for auction for £1.5MILLION

A pair of rare diamond-rimmed and emerald lens spectacles that belonged to a mystery prince from 17th century Mughal India will go up for auction this month.

The unique spectacles will be sold at Sotheby’s auction house in London in October and are estimated to reach between £1.5 to £2.5 million.

The original patron for the spectacles is unclear but they are believed to have been commissioned by an unknown prince from Mughal Empire, the dynasty that ruled most of India and Pakistan in the 16th and 17th centuries. 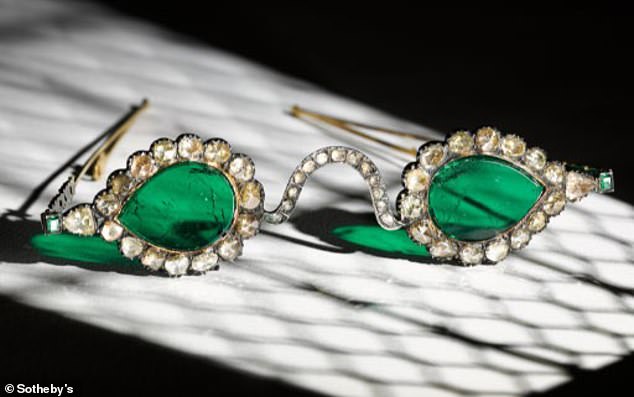 They were made by an artist by shaping a single diamond – possibly the largest ever found – that weighed over two hundred carats, and they now together weigh twenty-five carats.

In a statement from Sotheby’s, the auction house wrote: ‘The diamonds are flawless, thought to be from the mines of Golconda in Southern India.

‘The faceting around the edge displays extreme skill, arranged to hold transparency in the lenses while releasing light from the edges.’

In circa 1890, the lenses were placed in new frames, decorated with rose-cut diamonds. There is no comparable example of either known to exist.

While ordinary lenses function to improve sight, these emerald lenses were considered to be aids for spiritual enlightenment. In mythology, diamonds were thought to illuminate and emeralds were believed to have held miraculous powers to heal and to ward off evil. 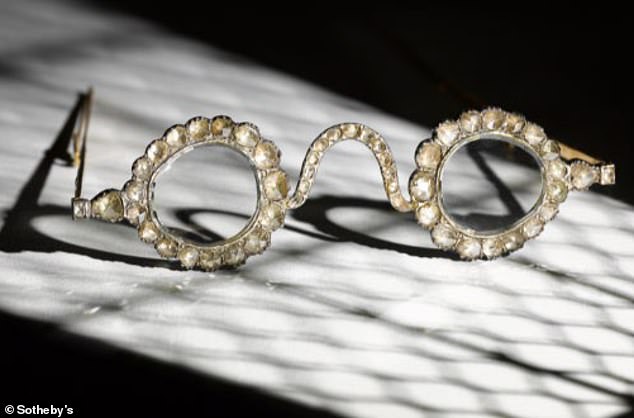 The unique spectacles will be sold at Sotheby’s auction house in London in October and are estimated to reach between £1.5 to £2.5 million

The ancient Roman Emperor Nero was said to have observed gladiatorial contests through a precious green stone in an example of one of the first-ever spectacles.

In Mughal India, following the tragic death of emperor Shah Jahan’s beloved wife, Mumtaz Mahal – in whose honour the Taj Mahal was built – the emperor is said to have cried so many tears that he needed to cure his ailing eyes with emerald stones.

Edward Gibbs, Chairman of Sotheby’s Middle East and India said: ‘These extraordinary curiosities bring together myriad threads – from the technical mastery of the  cutter and the genius of craftsmanship to the vision of a patron who chose to fashion two pairs of eyeglasses quite unlike anything ever seen before.

‘They are undoubtedly a marvel for gemologists and historians alike, and it is a real thrill to be able to bring these treasures to light and to offer the world the opportunity to wonder at their brilliance and the mystery behind their creation.’

Ahead of the sale, the spectacles will be exhibited for the first time to the public in Hong Kong from October 7 – 11 and in London from October 22 – 26.