Snow has blanketed parts of Syria, Lebanon, Jordan, Libya and Israel – covering areas that it has not reached in years with drifts up to six inches deep.

Lebanon was among the hardest hit, as the country was struck by Storm Joyce which brought gale force winds of up to 62mph, storm surges that submerged coastal areas, and widespread snowfall.

In the mountains of Syria’s Sweida province, snow was as high as six inches in place, according to the official state news agency SANA, while flakes also fell in the capital Damascus.

The University of Damascus called off mid-term exams scheduled for Wednesday and Thursday in all its branches around Syria because of the extreme weather conditions.

It comes amid a winter of unseasonably cold weather that also caused snowfall in Iraq last month, and is set to continue through the weekend in many places. 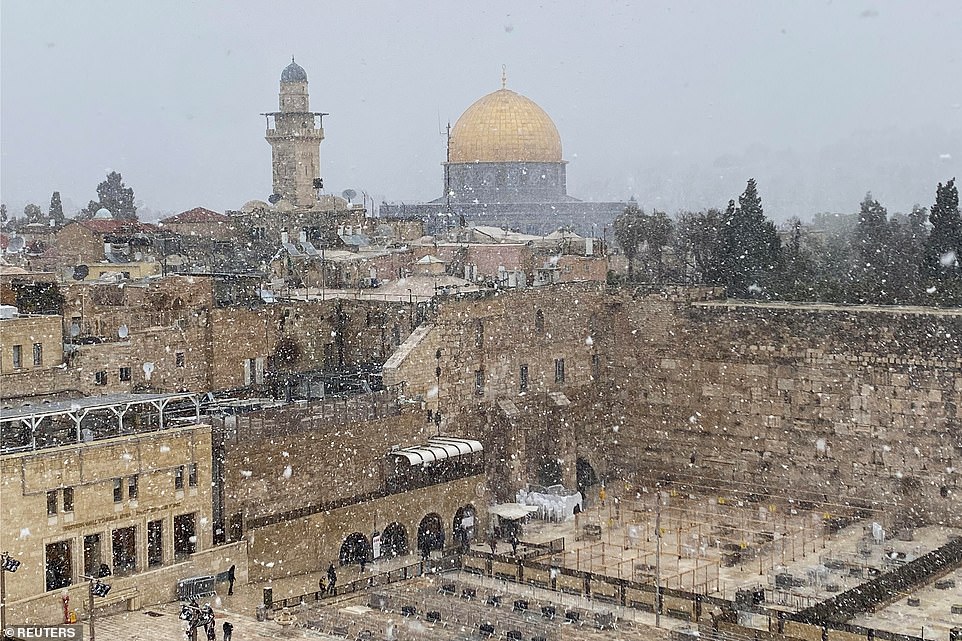 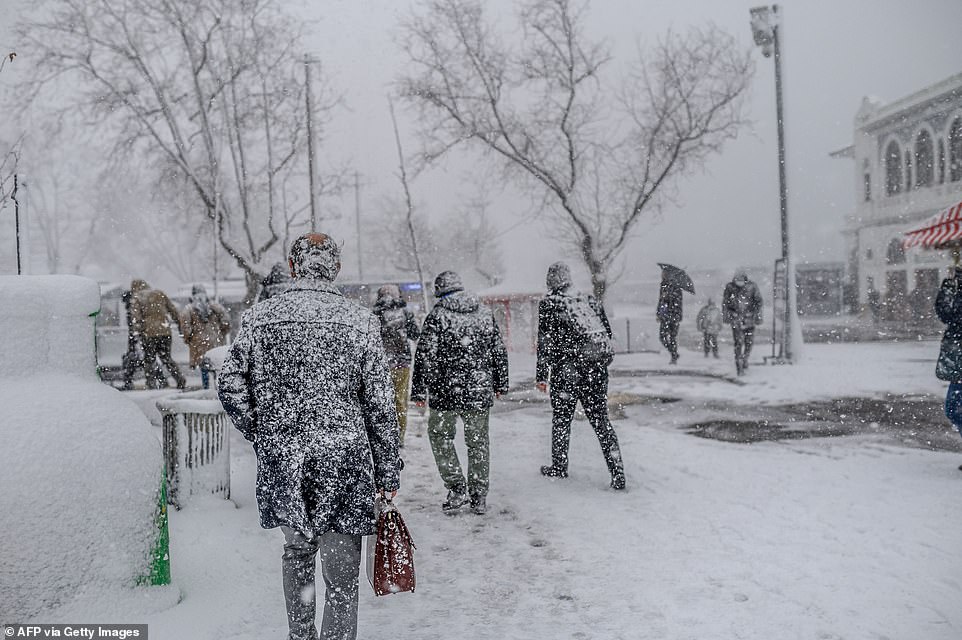 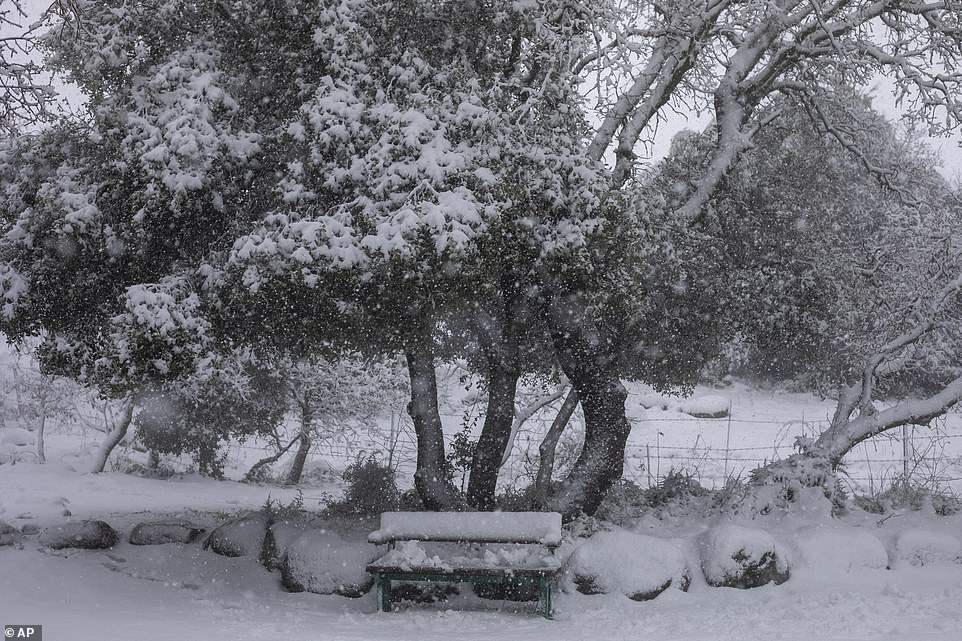 Snow up to six inches deep fell in mountainous regions of southern Syria near the border with Israel (pictured, the Quneitra border between the two countries) 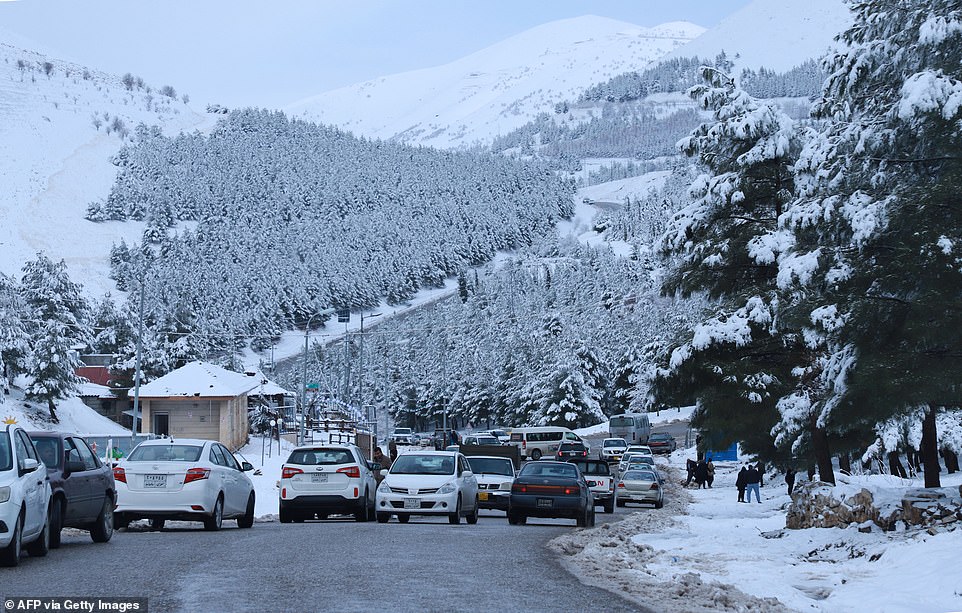 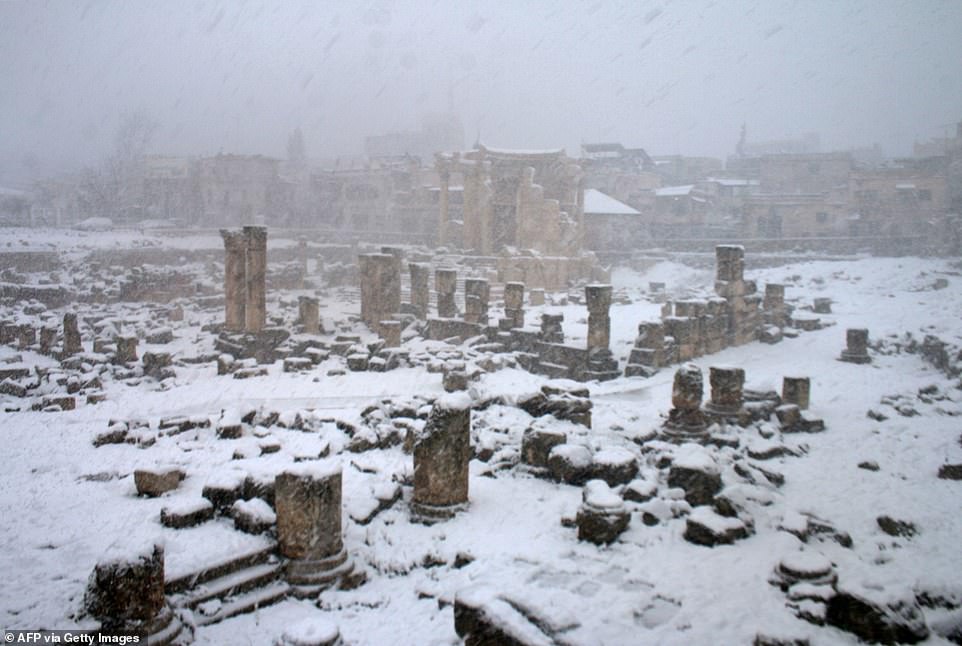 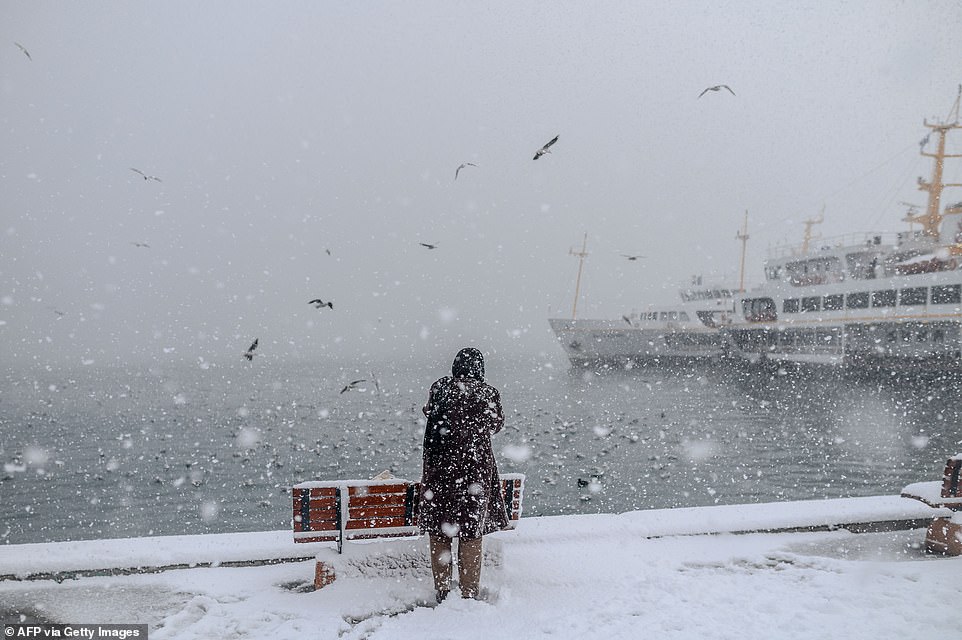 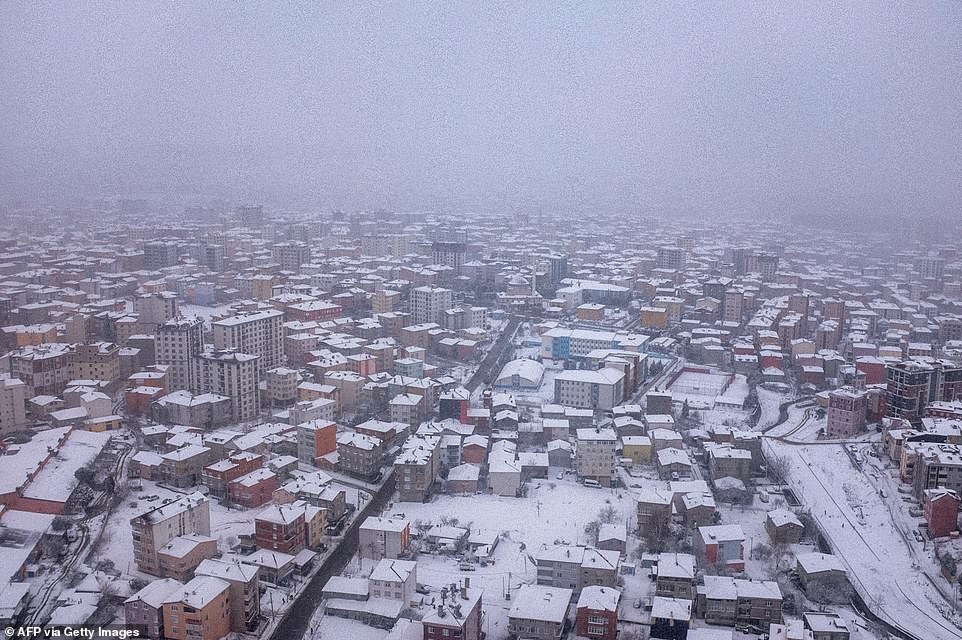 Later, local authorities in the provinces of Sweida, Quneitra, Daraa and Tartous suspend school on Thursday due to the storm and heavy snowfall.

In the opposition-held northwestern Syria, civil defense teams have been building dirt mounds since Tuesday around camps for the displaced to prevent rain from flooding the crowded areas.

In neighboring Lebanon, Storm Joyce hit late Tuesday with gale force winds registering between 52mph and 62mph. The storm is expected to get stronger Thursday.

Breaking a warm spell, the storm brought heavy rainfall, a sharp drop in temperatures and the heaviest snow fall in Lebanon this year.

Snow is expected to cover areas of altitudes as low as 400 meters, according to the meteorological department. Nearly a dozen roads in eastern and northern Lebanon were closed to traffic because of the snow.

A beachside club and restaurant were submerged in water as waves nearly 4 meters (13 feet) high slammed onto the shore.

The Israeli Meteorological Service forecast heavy thunderstorms and cold temperatures across much of the country, with snowfall at higher altitudes expected later on Wednesday, including in Jerusalem.

On Wednesday night, Israeli police closed the main road between Tel Aviv and Jerusalem due to snow.

Heavy snowfall covered the Israeli-annexed Golan Heights near the border with Syria.

In Jordan, the COVID-19 vaccination drive was suspended due to severe weather conditions. Schools and universities also put off classes.

Jordan’s Prime Minister Bishr al-Khasawneh announced that Thursday will be an official holiday for both the public and private sector due to the snow storm.

Osama al-Tarifi, director of the operating room of the Arabia Weather site, said snow has reached eight inches in the mountains of Ajloun in northern Jordan, where snowfall has been non-stop since Tuesday night.

In Libya, snow blanketed the country’s northeast mountains as snowfall continued since Tuesday, covering forests and roads in some areas in the North African country.

Residents of the Jabal al-Akhdar area in the far northeast part of Libya took their children out for fun, some making snowmen and others starting snowball fights.

‘I was surprised, actually, by the number of families who came here to take pictures to remember the snow,’ said Ali al-Shairi, an amateur photographer from the eastern city of Bayda, which is known for recurrent snow in Libya but has not seen any for a couple of years.

In neighboring Egypt, heavy rain and windy weather prevailed on Wednesday and was expected to last into Thursday, the country’s meteorological agency said.

Authorities in South Sinai province, which includes touristic hubs, canceled touristic activities, including safaris and cruises to weather the storm. 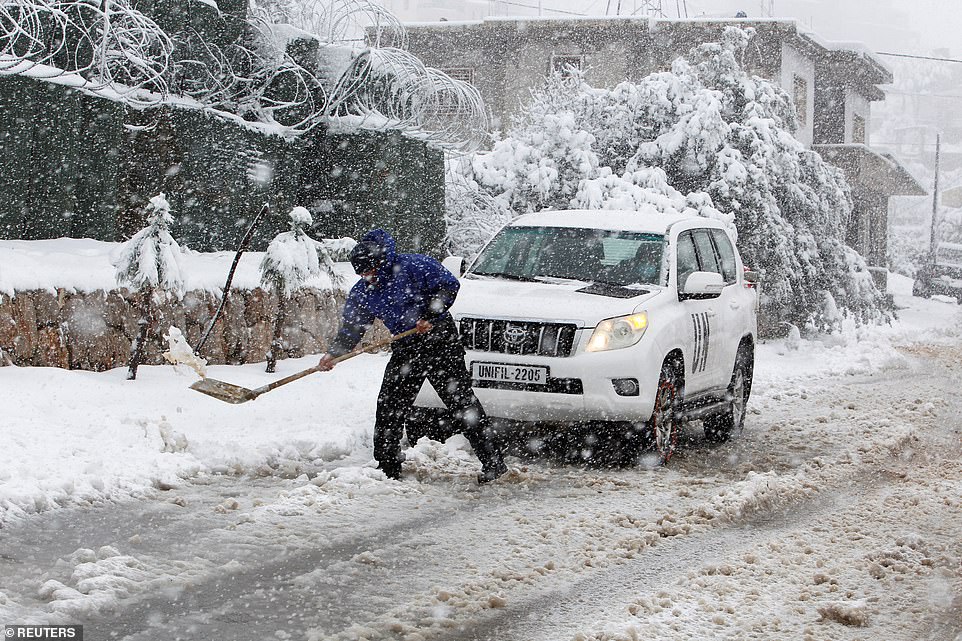 A man shovels snow on a road, during a snowstorm in the village of Kfar Shouba in southern Lebanon 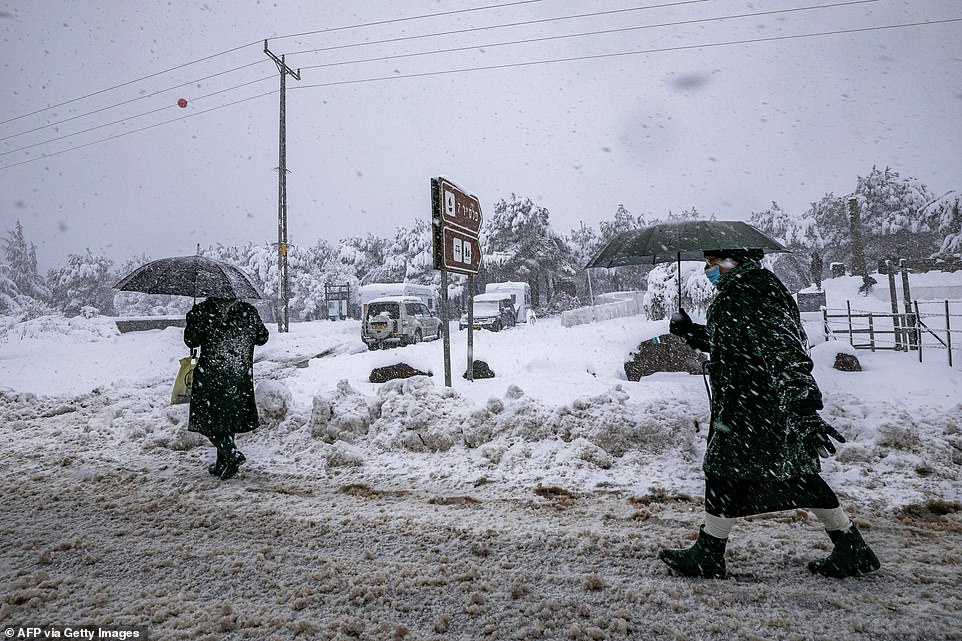 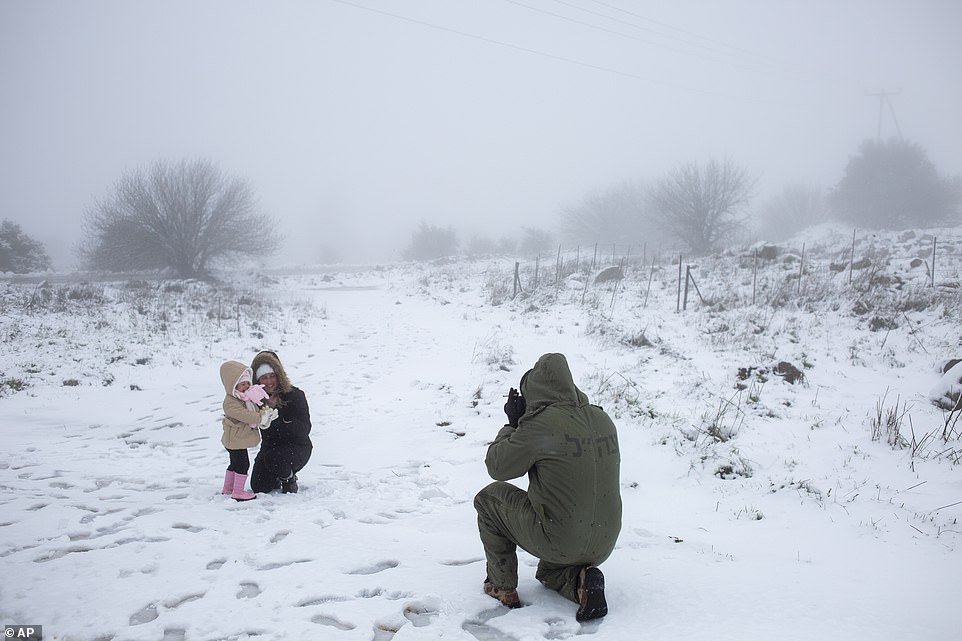 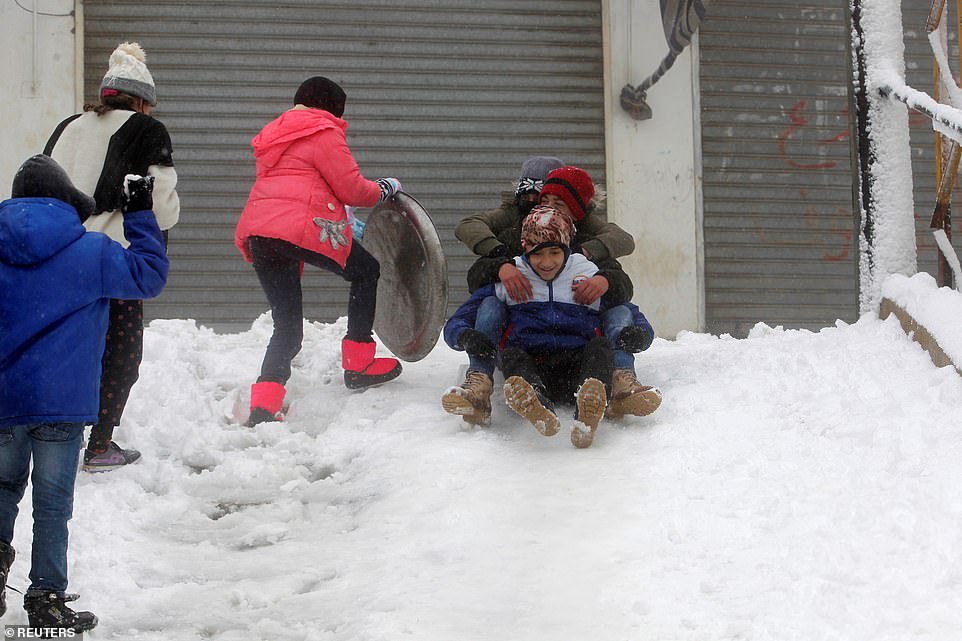 Children play in the snow, during a snowstorm in the village of Kfar Shouba in southern Lebanon 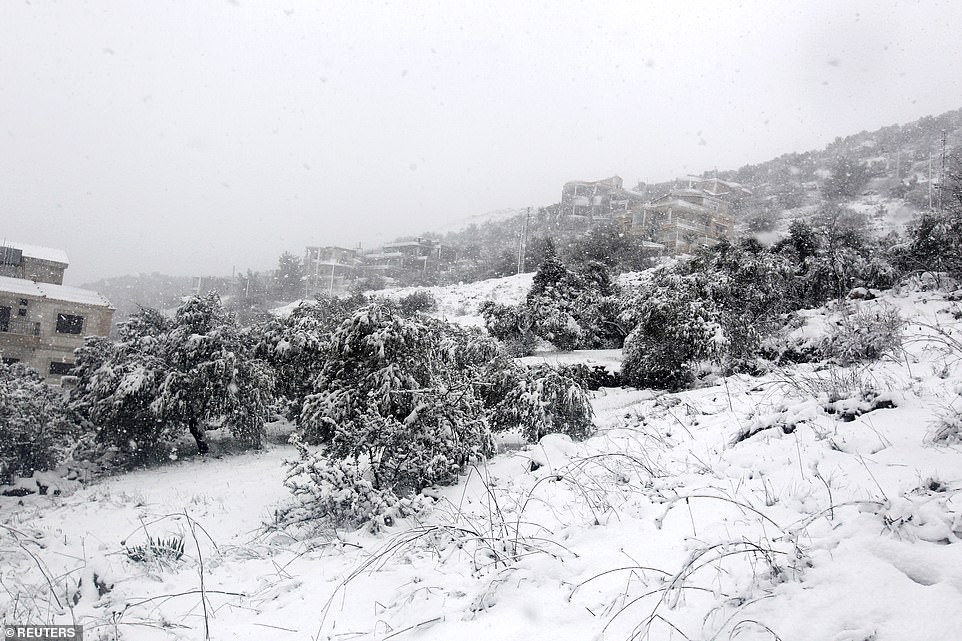 A view shows snow covered trees, during a snowstorm in the village of Kfar Shouba in southern Lebanon

All of this weather chaos is down to one thing – the polar vortex.

Around the North Pole, winter’s ultra-cold air is usually kept bottled up 15 to 30 miles high. That’s the polar vortex, which spins counterclockwise like a whirling top above the surface of the Earth.

The polar vortex is usually held in place by the jet stream, which sits around 20 miles lower and meanders around the northern hemisphere bringing temperate weather to Europe and the US.

But sometimes the jet stream and the polar vortex weaken, meaning that the freezing Arctic air plunges southwards into areas of North America and Europe which are usually warmer during the winter. 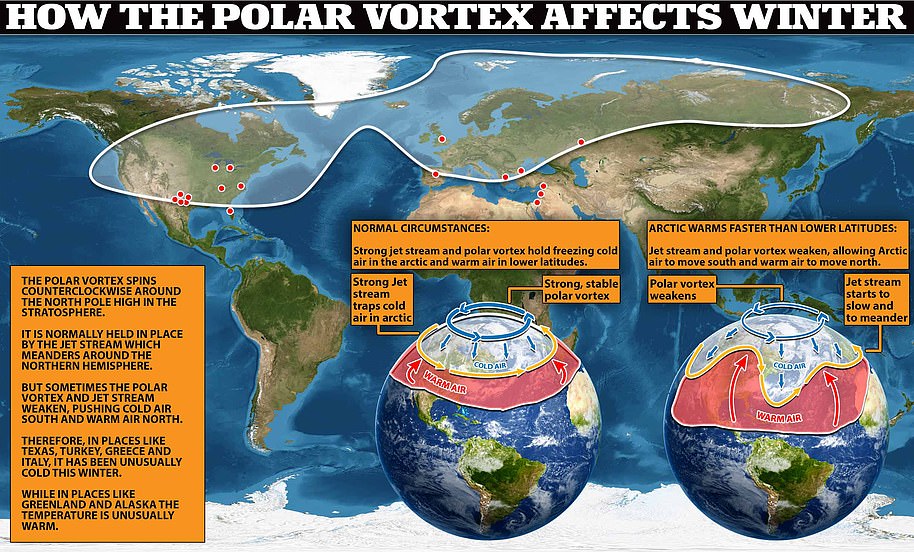 Around the North Pole, winter’s ultra-cold air is usually kept bottled up 15 to 30 miles high. That’s the polar vortex, which spins counterclockwise like a whirling top above the surface of the Earth. The polar vortex is usually held in place by the jet stream, which sits around 20 miles lower and meanders around the northern hemisphere bringing temperate weather to Europe and the US. But sometimes the jet stream and the polar vortex weaken, meaning that the freezing Arctic air plunges southwards into areas of North America and Europe which are usually warmer during the winter. It also means that places which are normally very cold in the winter, like Alaska and Greenland, feel comparatively warmer as the shape of the polar vortex becomes warped. Pictured: A map showing the polar vortex and red dots signifying just some of the locations affected 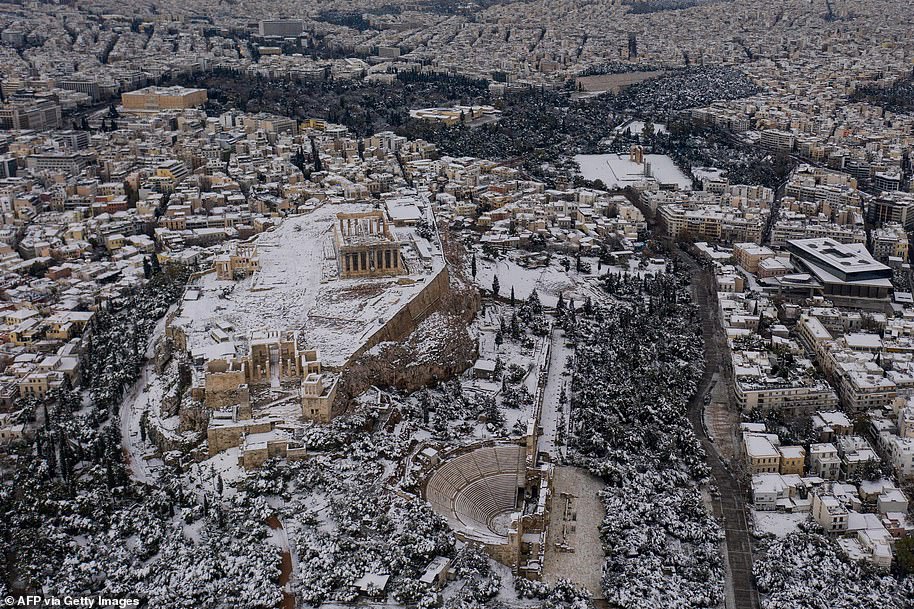 ATHENS: The Acropolis and the Parthenon are covered in snow on Wednesday

It also means that places which are normally very cold in the winter, like Alaska and Greenland, feel comparatively warmer as the shape of the polar vortex becomes warped.

It’s been happening more often, and scientists are still not completely sure why, some say it is a natural random weather pattern while others claim that it has been caused by man-made climate change.

Meteorologists say that this particular polar vortex is one of the nastiest and largest they have seen since records began in the late 1950s.

The polar vortex spends winter in its normal place until an atmospheric wave – the type that brings weather patterns here and there – slams into it.

Normally such waves don´t do much to the strong vortex, but occasionally the wave has enough energy to push the spinning top over, and that´s when the frigid air breaks loose.

Sometimes, the cold air mass splits into chunks – an event that usually is connected to big snowstorms in the U.S. East, like a few weeks ago.

Other times, it just moves to a new place, which often means bitter cold in parts of Europe. This time it did both, Cohen said.

There was a split of the vortex in early January and another in mid-January. Then at the end of January came the displacement that caused cold air to spill into Europe and much of the United States, Cohen said.

Both Cohen and Francis said this should be considered not one but three polar vortex disruptions, though some scientists lump it all together.

While both the vortex and the wave that bumped it are natural, and polar vortex breakdowns happen naturally, there is likely an element of climate change at work, but it is not a sure thing that science agrees on. 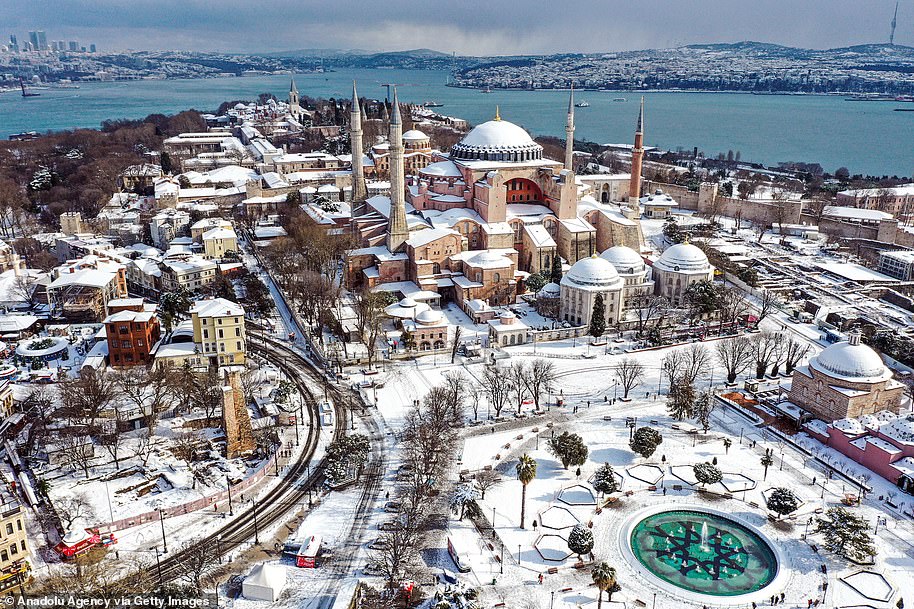 ISTANBUL: The dome of the Hagia Sophia is covered in snow on Wednesday as weird winter weather caused by a polar vortex blanketed Turkey in white 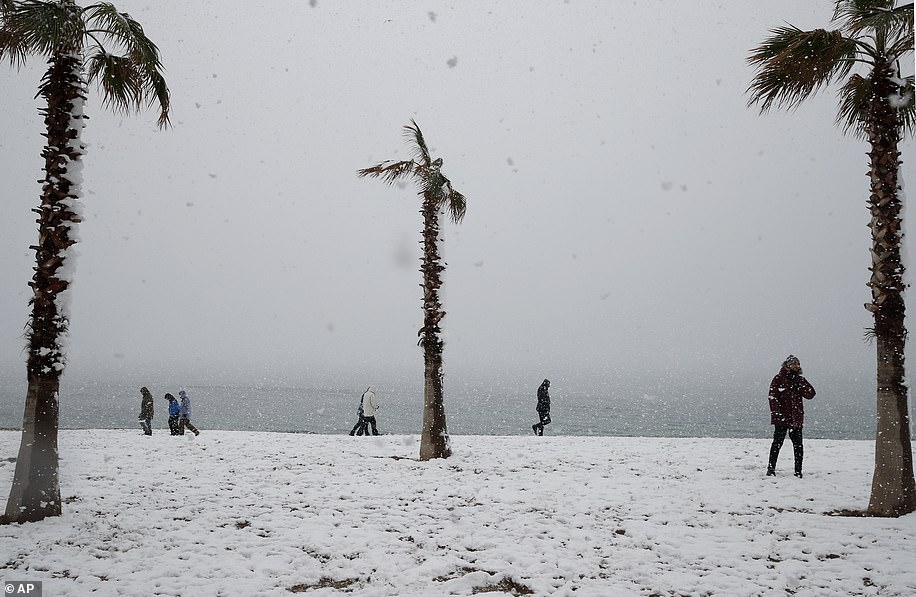 The rare cold snap in Athens did not deter people from heading to the beach to enjoy themselves. Pictured: People walk along the beach of Edem in Paleo Faliro, Athens, earlier today