America’s second largest defense company Raytheon orders workers to ‘identify their privilege’ and to ‘give those with marginalized identities the floor during meetings’, leaked woke training manual reveals

Raytheon CEO Greg Hayes spearheaded the campaign called ‘Stronger Together’ starting last summer, which was revealed through training documents reported by Chris Rufo, a senior fellow at the Manhattan Institute, a conservative think-tank.

The documents instruct employees at the weapons-maker to strive for ‘equity’ over ‘equality’, and tutor them on ‘intersectionality’, a world-view that critics say divides people into different categories in a hierarchy of privilege and oppression based on race, gender, sexual identity, and other factors.

In one document, the company urges white employees to ‘identify [their] privilege,’ and argues that straight white men are the most privileged, and the least oppressed. 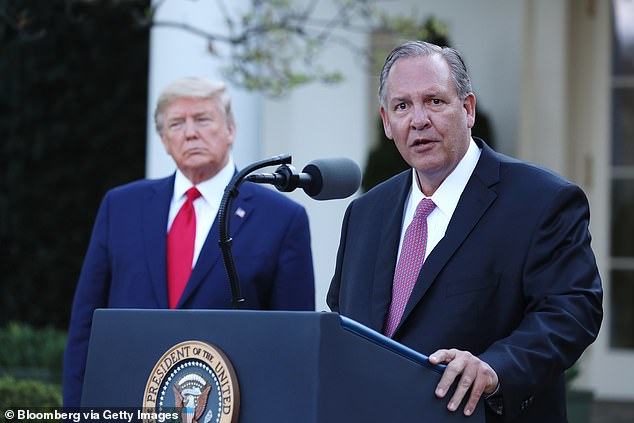 Raytheon CEO Greg Hayes is seen above in March 2020. His ‘Stronger Together’ training program is facing criticism after 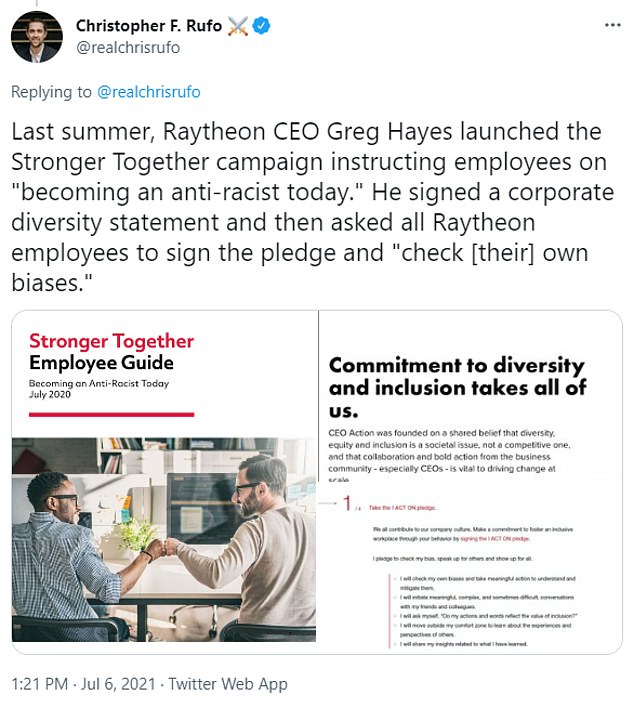 The training documents urge workers to ‘develop intersectional allyship in the workplace’.

‘Someone’s race or ethnicity isn’t a taboo topic,’ the slide advises. ‘Talk openly about it to appeal to people’s conscious values and challenge their unconscious biases.’

The training material urges white people to ‘listen to the experiences’ of ‘those with marginalized identities’ and to ‘give them the floor in meetings or on calls, even if it means silencing yourself.’

The material also offers helpful tips on what white people should and should not say to their black colleagues.

‘I can’t wait for things to calm down and get back to normal’ is a forbidden remark, but ‘I realize my discomfort is a fraction of what you’re feeling’ is encouraged. 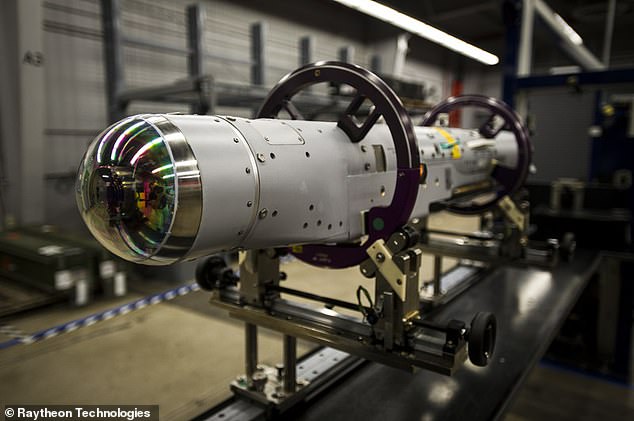 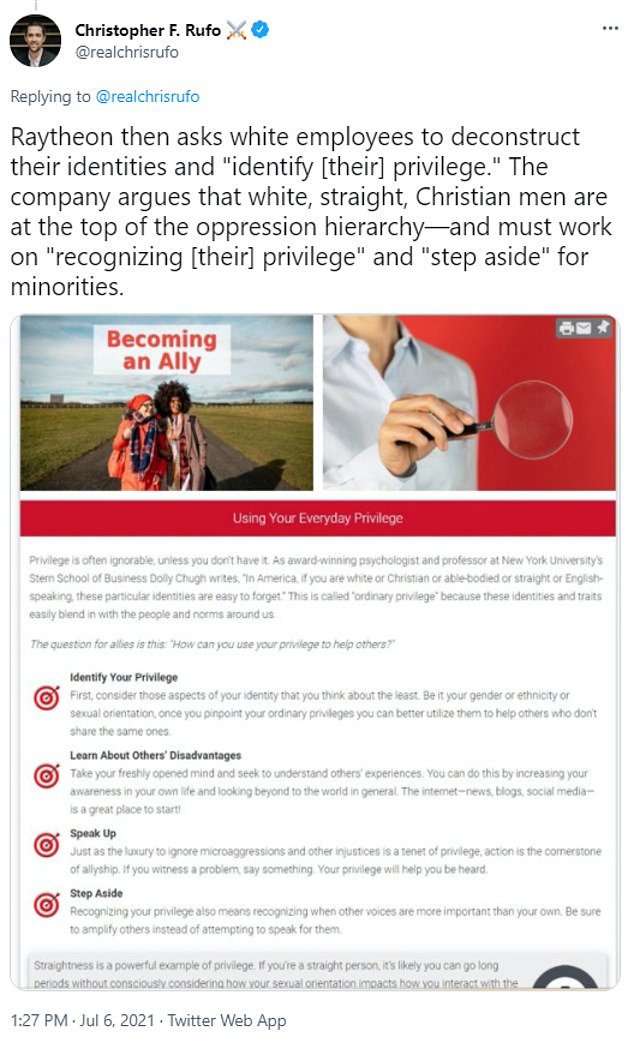 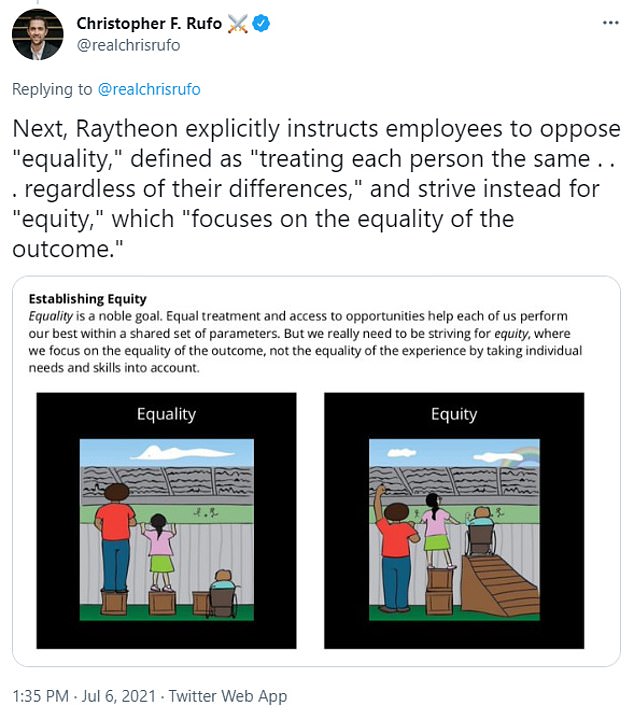 The training document also recommends an article called 75 Things White People Can Do For Racial Justice that encourages white employees to ‘defund the police,’ ‘participate in reparations,’ ‘decolonize your bookshelf,’ and ‘join a local ‘white space.”

The slides tout the fact that CEO Hayes signed a pledge promising in part, ‘I will check my own biases’, and urged other employees to sign the pledge.

In a column for City Journal, Rufo argued that ‘the end goal of this program’ is ‘the rejection of the principle of equality under the law.’

‘The company claims that the colorblind standard of ‘equal treatment and access to opportunities’ is not enough; ‘anti-racist’ policies must sometimes utilize unequal treatment to achieve equal outcomes,’ he said.

Rufo is a conservative activist who opposes Critical Race Theory, a controversial field that critics say categorizes people as privileged or oppressed based on their skin tone. 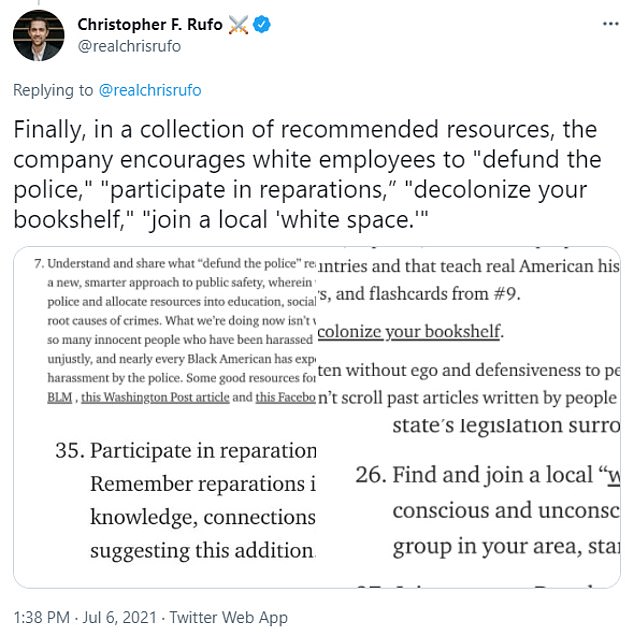 Defenders argue CRT merely examines the ways in which race and racism influence American politics, culture and the law, and say it is vital to eliminating racism.

A Raytheon spokesperson did not immediately respond to an after-hours inquiry from DailyMail.com requesting a response to Rufo’s criticism.

In an appearance on Fox News, Rufo slammed Raytheon over the training material.

‘This is really astonishing because this is one of the largest corporations in the world and manufactures key defense armaments, and yet it has been captured by this woke ideology that seems to be now the dominant force, not only in education and government, but also in business,’ he said.

‘It was a joke last year that Raytheon would put the rainbow flag on a drone strike and now, that meme, that joke has become a reality,’ he added.