Jacob Rees-Mogg today insisted God ‘made man and he made woman’ as he was grilled on trans rights during a phone-in today.

The Cabinet minister – a devout Catholic – quoted scripture as he dismissed the idea that a woman could have a penis.

While stressing that he supported ‘tolerance’ and allowing people to choose how to conduct their lives, Mr Rees-Mogg argued on LBC radio that biological facts were ‘perfectly obvious’.

The comments came as an anti-Tory caller named Jane warned she would boycott Labour and the Liberal Democrats over their equivocation on the trans issue.

Quoting Alice in Wonderland, she said she was sick of the opposition parties for expecting voters to believe ‘six impossible things before breakfast’.

It comes after a month in which senior Labour figures including Sir Keir Starmer floundered when asked simple questions about gender issues.

The caller, called Jane, asked Mr Rees Mogg: ‘I have what is should be a very, very simple question. What is a woman and can a woman have a penis?’ 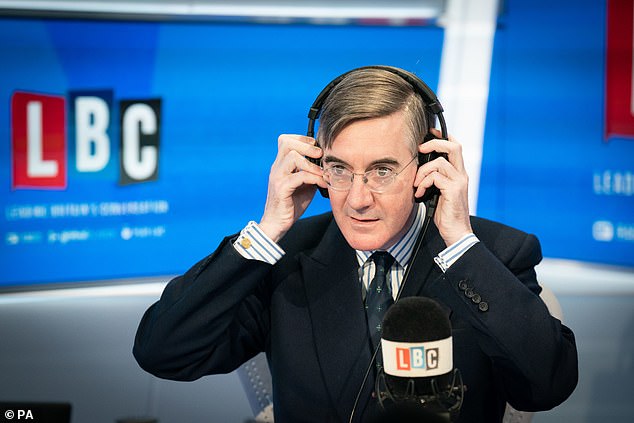 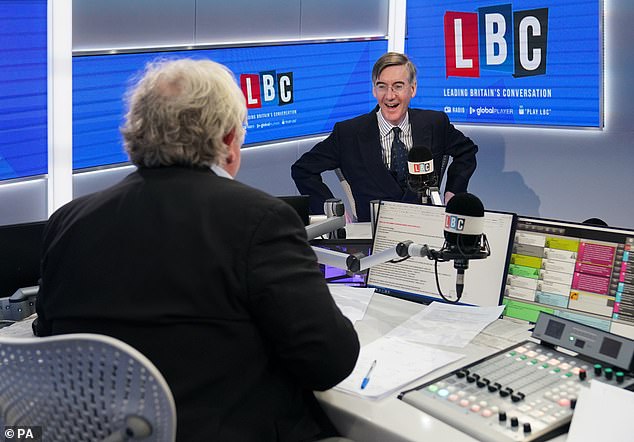 It is perfectly legal for public bodies and businesses to limit services to a single sex, the equalities watchdog declared today in a boost for women’s rights.

There has long been uncertainty over whether services such as refuges for female rape victims are allowed to exclude trans people who were born as a man.

Today the Equality and Human Rights Commission (EHRC) said that service providers wishing to limit services to a single sex are legally able to do so, provided the reasons are justified and proportionate.

The new guidance will have huge ramifications for hospitals, retailers, hospitality and sports clubs which have faced difficult issues in recent years under pressure from the trans lobby.

It makes it clear that it is legal for a gym to limit communal changing rooms to a single sex, as long as a gender neutral changing room is also provided for trans people.

The minister replied: ‘I think as often the Bible gives the best answer to this: Genesis 127. ”God made man in His own image. He made man and he made woman, he made both of them.”

‘I think God making us in his own image is quite good enough for me. And to your second question, I think the answer is no.’

Asked for her response, Jane said: ‘Quite frankly, I’m really mortified because Jacob Rees-Mogg represents everything that I loathe.

‘But if the Labour Party, the Lib Dems and the Greens don’t wake up, smell our fury and respect my sex we’re going to have a Tory government for the foreseeable future.

‘I always vote. I cannot, and I will not, vote for any politician who expects me to suspend belief and does not respect my sex.’

Jane admitted it was a ‘bizarre time’ when she found herself in agreement with Mr Rees Mogg.

‘But we’re meant to believe six impossible things before breakfast at the moment,’ she said.

‘People must be allowed to lead the lives they want. I don’t want to tell them how to lead their lives. But I agree with Jane there are some things that are perfectly obvious, and you can’t contradict them.’

Labour has found itself in difficulty over trans issues in recent weeks, and last month Harry Potter author JK Rowling said the party could ‘no longer be counted on to defend women’s rights’.

Shadow home secretary Yvette Cooper refused three times to define what a woman is, telling Times Radio she was ‘not going to get into rabbit holes on this’.

Ms Dodds, Labour’s shadow minister for women and equalities, told BBC Radio 4’s Women’s Hour there were ‘different definitions legally’ and added: ‘I think it does depend what the context is, surely.’

Sir Keir floundered when asked whether a woman could have a penis, saying: ‘I don’t think that discussing this issue in this way helps anyone in the long run’.

Angela Rayner, Labour’s deputy leader, backed an NHS hospital which asked men whether they were pregnant.

Asked whether a woman could have a penis, she said: ‘When we debase it to whether or not… what genitalia you’ve got, I think all that does is damage people and it doesn’t help us go forward on some of the real issues that people are facing.’ 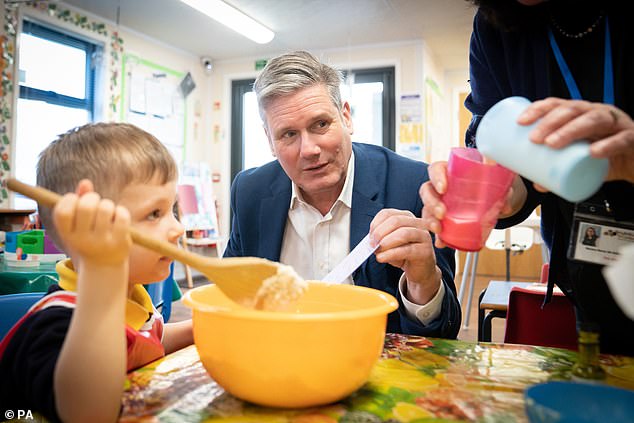 Keir Starmer (pictured visiting a nursery in north London today) floundered recently when asked whether a woman could have a penis, saying: ‘I don’t think that discussing this issue in this way helps anyone in the long run’