South Korean police say they believe a possible relative of two children whose bodies were found in suitcases in New Zealand last week is likely in South Korea.

Immigration records show that the unidentified woman in her 40s arrived in South Korea in 2018, but there has been no record of her departure since, said Park Seung-hoon, an official at the National Police Agency in Seoul. 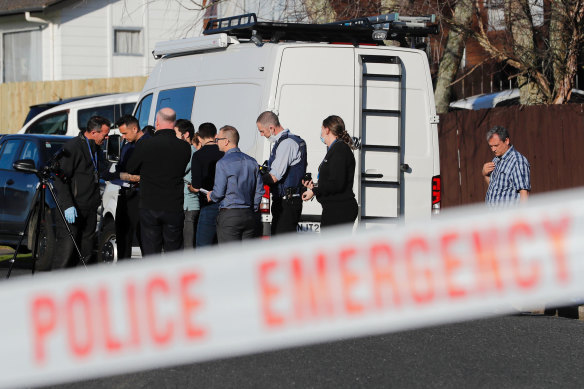 New Zealand police investigators work at a scene in Auckland after bodies were discovered in suitcases bought at storage place auction. Credit:NZ Herald/AP

It would be difficult for South Korean police to pursue her unless New Zealand officially requests her extradition, which may happen if the investigation proceeds to a point where Interpol places a red notice against her, Park said.

Her whereabouts and whether she had other relatives with her when she arrived in South Korea were not immediately known.

The woman was born in South Korea and later moved to New Zealand where she gained citizenship. New Zealand police suspect the woman could be the mother of the children found dead, as her past address in New Zealand was registered to a storage unit where the suitcases were kept for years, according to Park.

“If the woman is clearly identified as a suspect and an arrest warrant is received, there is a high possibility of an Interpol red notice. We will then proceed with the extradition process,” an official from the Foreign Affairs Bureau of the National Police Agency told reporters in Seoul, according to the Hankyoreh newspaper.

The remains of the children were found last week in suitcases a New Zealand family purchased from an online auction that involved abandoned goods. The children were between five and 10 years old and had been dead for a number of years, and the suitcases had been kept in storage for at least three or four years, Detective Inspector Tofilau Faamanuia Vaaelua said.

It is not known if the children were enrolled in school before they died.

Vaaelua said on August 18 that a full postmortem examination was yet to take place and DNA testing would be carried out on the remains.