Lord Mayor Sally Capp is eating cheese at Queen Victoria Market, not far from the deli where she experienced her first cheese epiphany in the late 1980s. Back then, she was a law and commerce student at the University of Melbourne, trawling the market with $30 to feed her North Melbourne sharehouse for a week.

“We’d do pretty well,” she says. “Those expeditions introduced me to food I’d never heard of before.” She first tried Neufchatel — a soft, bloomy French cheese — at one of the delis. “I became obsessed with it,” she says.

It’s more than 30 years since that Gallic awakening and we are at ReWine, a cleanskin bottle shop and snack stop where wine is tapped from barrels into returnable bottles. Today’s cheese board includes a nutty-tasting cheddar from Wisconsin, the soft, tangy Silver Wattle from Castlemaine’s Long Paddock and a triple-cream Brie from the Barossa. “Here I am at Vic Market still eating cheese,” notes the lord mayor, aged 53. 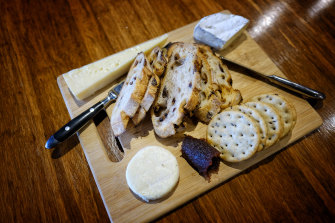 Cheddar from Wisconsin, Silver Wattle from Castlemaine’s Long Paddock and a triple-cream Brie from the Barossa at ReWine in the Queen Victoria Market.Credit:Luis Enrique Ascui

When she was elected in 2018, the redevelopment of the market was a key ambition and Capp’s success in unpicking the mesh of embedded stakeholder positions to commence a $268 million renewal is something she’s happy to spruik. “I thought that was going to be one of my biggest challenges, didn’t I?” she says.

Instead, the pandemic came calling, turning the busy, vibrant city she stewards into a hushed and desolate space. Shops and restaurants closed. Thousands of international students departed. Office workers stayed home — though not Capp. “I was in the office every day,” she says.

“I would see Melbourne at a standstill and know there was all of this activity happening behind the scenes. People on the front lines turned up every day. Public transport still ran. We thought about what we could deliver to those who relied on us. What could local government provide? Where were the gaps? What wasn’t state and federal government covering that we could help with?”

Early on, the City of Melbourne offered grants for capital works that could easily be tackled when premises were closed. There was assistance for small businesses shifting to online trade. Business concierges offered assistance in untangling the web of grant programs offered at every layer of government. Later, Melbourne Town Hall was offered as a vaccination hub.

“We’re one of the most multicultural municipalities in Victoria,” says Capp. “We communicated messages around vaccination across cultures and language abilities. Our vaccination clinic was particularly for rough sleepers, people without Medicare cards, people with language barriers. In all we did, it was about understanding the different roles we could play, as local government that is connected to community.”

But connection and community frayed as restrictions dragged on. “People would be so frustrated by governments and government responses as well as so grateful,” says Capp. “It was a tale of extremes.”

The council’s commitment to outdoor dining when Melbourne reopened after the 2020 lockdowns created a lot of heat. “I had restaurant owners swearing at me,” says Capp, “telling me it was ridiculous, it would never work, it’s a waste of money. But I am on a couple of groups of mayors from around the world and I had seen outdoor dining unfolding in other cities. I thought we had to have a go at it. It turned out to be brilliant.”

She suspects the personal impacts of the pandemic are buried in her somewhere. 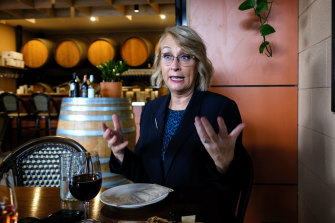 ‘We hope to fill in those missing teeth in the smile of Melbourne’: Sally Capp at the Queen Vic Market.Credit:Luis Enrique Ascui

“There have been some dark times,” she says. “It’s been so intense and unrelenting and I haven’t had time to fully process it. It’s been very emotional. I’m naturally a ‘glass all the way full’ kind of person but I’m vulnerable, too, and I have my own flaws. There’s been a lot of pressure on leaders during this time not to be fallible.

“Some of the attacks have been very personal but there’s just too much to do to stay in those moments too long. You have to compartmentalise it and park it for a while. One day, I’ll catch up with all that.”

Meantime, she’s busy looking at the silver linings. “We now have 1500 permanent parklets and rooftop bars proliferating with the most incredible heaters and awnings,” she says.

ReWine’s owner Marshall Waters brings over our pizza, judiciously scattered with prosciutto, cherry tomatoes and bocconcini. “I think pizzas with fewer things on top are the best,” says Capp, picking up a slice. Her wine — a Macedon pinot noir — remains untouched and we both sip water. “I really am glass all the way full,” she says. 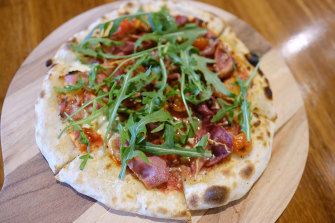 Our lunch spot is quiet, and the street outside is empty, too. Is Melbourne really surging back to life?

“I did bring you to Queen Victoria Market on a day it’s closed,” Capp laments.

Overall, CBD foot traffic is increasing week on week (and weekends are 115 per cent of the pre-COVID benchmark). Office occupancy still lags; visitors are definitely returning but it’s a steady trickle, not a tourist tsunami.

It’s between-times, thinks Capp. Corporates are hanging onto surplus office space until their workforce finds a new normal. Meantime, small-to-medium enterprises such as arts and community organisations are keen for city tenancies.

“They’re hustling and bustling, looking for opportunities, while the key players are snoozing and cruising,” she says. The eventual spill will be exciting.

“Melbourne is actually good at transformations,” Capp says. “We saw that in the late ’80s, early ’90s when we were described as a moribund city in a rust-bucket state, and then we became the most liveable city in Australia. We want to accelerate into that transformation mode as smoothly and as quickly as we can.” 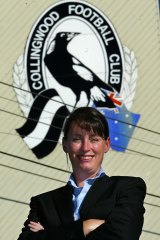 Joining the Collingwood board in 2004.Credit:Sebastian Costanzo

Capp knows about transformation. After working as a commercial lawyer, she co-founded a funds management group and oversaw its ASX listing, and later became a senior executive at ANZ and the first woman on the Collingwood Football Club board (as a child she wore Billy Picken’s number 25 on her duffle coat to rowdy matches at Victoria Park).

In 2006, a bout of thyroid cancer prompted a major rethink of her devotion to corporate life. “My priorities and my perspective completely changed,” she says. “I started looking more for a sense of connection and purpose.”

In 2007, Capp became CEO of the Committee for Melbourne, a member-based policy organisation. Two years later, she was the first female appointed as agent-general in the United Kingdom, promoting Victoria to the world. Back home in 2015, she was chief operating officer of the Victorian Chamber of Commerce and Industry.

“Having cancer crystallised for me that I could be an advocate, a champion for issues and people,” she says. “And importantly, I had a sense that I could be part of creating change. I shouldn’t just observe and throw barbs or opinions. So that’s what I started doing, more of those little things and it’s changed the trajectory of my life in so many ways.”

Throwing her hat in the ring as an independent candidate for the lord mayorship was one of those “little things”.

“I’m not somebody that looks at a straight line for my life,” says Capp. “I think of people who are in a straitjacket and then I think of people doing a star jump. I’m a star jump kind of person. I’ve always been a serial goer, trying new things, testing my boundaries. It’s taken me on a wild journey.”

Capp lives in Carlton with her husband, Andrew Sutherland. Their son, Will, 23, has just graduated from Yale, and Nic, 24, has his first post-uni job at National Australia Bank. “He lives in a sharehouse 124 steps from us,” Capp says. “I don’t think he sees that as a positive, but I love it. I promise I’m not hanging around on his doorstep too much.”

I believe her: there’s simply too much else to do. The winter events program is packed: a Truffle Festival wafts through Vic Market this weekend, Hamilton and Harry Potter are big draws, and Picasso is visiting for Winter Masterpieces. At a retail level, rejuvenation programs will activate empty shops.

“We hope to fill in those missing teeth in the smile of Melbourne,” says Capp. “We want to bring in milliners, tailors, podcast studios, pop-up libraries.” 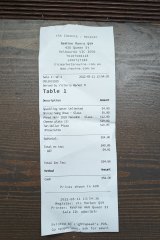 A compassionate wrap-around approach to homelessness has been a long-term focus for the lord mayor. “It’s an absolute priority for me,” she says, outlining the Make Room project at 602 Little Bourke Street, which will position 50 accommodation units alongside support services. There’s the continuing renewal at Vic Market: more seating and open space, better services for traders and visitors as well as affordable accommodation in new levels above.

Each blueprint is a pathway to change for the municipality but it’s also about job satisfaction. “It’s an absolute honour to be the lord mayor of Melbourne,” says Capp, who hasn’t decided if she’ll run for office again in 2024. “I’m wringing everything out of it. I am eating all the cheese and drinking all the water from my full glass. I’m not going to miss one iota of the experience.”