The new restaurant from the Frenchette chefs has downtown energy to spare. Midtown could use it.

The dark ages probably began when the Rainbow Room stopped taking reservations and turned into a wedding space. After that, Rockefeller Center went for years without having a restaurant that you’d really go out of your way for. This didn’t strike most people as weird. The dining scene’s center of gravity moved downtown so long ago that mediocrity seems like Midtown’s natural state.

But there’s nothing preordained about that, and the evolution of Rockefeller Center under its current owner, Tishman Speyer, is the proof. Lodi, the small, Milanese-style cafe that the chef Ignacio Mattos opened last year in a spot just south of the skating rink, was the first interesting new place to eat on the plaza in ages. With the arrival of Le Rock this summer on the opposite side of the rink, things started to get truly exciting.

The motto of some Midtown kitchens might as well be “Don’t frighten the horses.” Not at Le Rock, where there are blood sausages, snails and tablier de sapeur, a breaded and fried plank of tripe straight out of the gutbucket bouchons of Lyon. The menu has a sense of adventure for which you usually have to go downtown, where its owners, the chefs Riad Nasr and Lee Hanson, spent most of their careers. 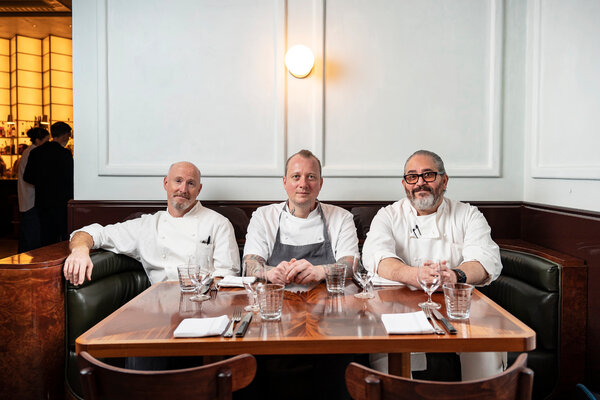 Le Rock is the second restaurant they’ve owned together, after Frenchette in TriBeCa. They have expanded on Frenchette’s model; the dining room has more seats by about a third, and the menu is roughly twice as long. Together with Walker Stern, Le Rock’s executive chef, Mr. Nasr and Mr. Hanson have kept the culinary spirit — brawny but precise — that makes Frenchette so appealing. They added a few embellishments, but the cooking hasn’t been allowed to get too tricky.

Like most French restaurants in New York that aren’t chasing after haute cuisine, Le Rock cherry-picks elements from the bistros, brasseries and grand cafes of France. This lets it cater to the all-American demand for lots of choices.

The early part of the meal can go in any number of directions.

Where Frenchette offers six oysters with spicy red finger-length chipolata sausages, Le Rock keeps a whole arsenal of chilled shellfish, like a Boulevard Montparnasse brasserie, though on a smaller scale. Anyone willing to pay “market price” ($68, when I had it) can dip into the body of a Dungeness crab for chunks of meat in horseradish-mustard mayonnaise, hidden under striped rows of chives, capers and grated eggs.

There is nothing wrong with this at all, but some of the less expensive choices were more dynamic, like a thinly sliced razor clam piled back into its shell with cilantro and a trickle of lime juice, or a glistening mound of raw spot prawns in the middle of a pool of lemon vinaigrette made with the rich and briny goo squeezed from the prawns’ heads.

Or you could ease into a meal with what the menu calls “amuses.” Frenchette has these, too, but there they are almost the size of the appetizers. The ones at Le Rock are more like bar snacks, and are priced that way: for $6 you can have a creamy little drum of the herbed cheese spread that the Lyonnais call cervelle de canut; a few spoonfuls of rosy chicken-liver mousse under a purple sheet of jellied port; or crisp breakfast radishes with old-guard butter curls. Costing about twice as much, but still cheap by the standards of this menu, are falafel so tender and good that I stopped caring what made them French and some really delightful fried ravioli by way of Monaco, stuffed with herbs, chard and ricotta and traveling under the name barbajuans.

These shirt-pocket-size amuses are easy to like, but they aren’t all easy to share, and most aren’t big enough to make an appetizer for one person. Some of the smaller ones get lost in the shadow of official appetizers like the thick plank of pistachio-studded pâté maison wrapped in bacon, or the snails in individual porcelain cups under lids made of toast that will drink up the hot butter, thick with garlic and parsley and bits of fried pancetta. And the leeks vinaigrette — roasted leek whites bundled inside leek greens and then grilled before being unwrapped at the table and dressed with an emerald-toned herb oil with, no doubt, even more leeks — could upstage a flambéed duck.

This top-heavy menu can make the meal’s start somewhat chaotic. By the time the main courses rumble to the table, though, it’s clear that Le Rock’s heart lies in the roll-up-your-sleeves, tuck-a-napkin-in-your-collar bistro tradition. There is steak au poivre, of course, but the peppercorns are pungent pickled green ones and the meat is a big pan-seared hunk of bison filet with a tenderness you never find in beef.

I am slightly obsessed with the housemade sausage, which is something like a kielbasa but is stuffed into its skin with bits of Comté that melt, almost invisibly, into the smoke- and garlic-scented pork.

The steak haché, essentially a bunless burger, may equal the svizzerina at Via Carota, which I didn’t think was possible. (It has the advantage, possibly unfair, of coming with fries; Mr. Nasr and Mr. Hanson may be the city’s reigning masters of the French fry.)

Mr. Walker’s kitchen has a deft hand with fish, too. Swordfish comes off a searing-hot grill with its juices intact so they can run into the string beans and dandelion greens below. A thick halibut fillet lies on a bed of spinach surrounded by a completely transfixing vin jaune cream sauce.

Credit for the desserts goes to Marian Neston and Michelle Palazzo, who understand that a restaurant like this must, by law, have profiteroles; Le Rock does, and the cream puffs are the kind with a crisp, rough, sugary craquelin surface. If you want everybody in the room to stare at you, go ahead and order the mignardise platter holding nine different mini-sweets on three tiers, but I got a little lost trying to keep them all straight.

I’d rather focus all my attention on the baba. Instead of the usual rum, Le Rock’s spongecake is soaked in génépy, an herbal liqueur with a flavor something like absinthe that’s been housebroken. One serving is a wedge the size of a chock you’d place behind the wheels of your car while you change a tire.

The wine list is an adventure of its own, more than 200 bottles, few of which you will recognize unless you stay up nights studying the latest texts on natural wine. Evangelists for these wines like to say they taste alive. It’s not always true, but the word fits the ones I drank at Le Rock. They were almost kinetic, which is just right for the food and the room.

Right now Le Rock has the racing pulse many talked-about spots have early in their run. Some of that may fade when the hype dies down, but not all of it, I suspect. The dining room is built to trap and magnify the crowd’s energy — and noise, though it’s not as loud as it might be. The seating is tighter than normal in expensive Midtown restaurants, where the carpeting and widely spaced tables let the lawyers and executive vice presidents talk as if they’re still in a conference room.

A lot of the energy comes from Rockefeller Center itself. It’s not just that the base of 30 Rock, at the start of its 70-story trip to the sky, is visible from any table. Workstead, the design firm, came up with a bar and dining room that seem to be talking to the architecture outside the windows. The dim glow of mahogany on the tables and the gentle curves of the green-leather banquettes recall the furniture of Donald Deskey, who worked on Radio City Music Hall’s interiors. Le Rock reminds you of Art Deco without imitating it. It’s a restaurant that borrows from New York and pays its debt with interest. Rockefeller Center was built as a vision of what the city could be; Le Rock is a vision of what Rockefeller Center could be.