A longtime hit on the Washington party circuit, the food of Nabila Farah comes to Brooklyn.

Atayef ashta, on the cutting board, is among the Lebanese classics.Credit…Rachel Vanni for The New York Times

When I found out that some of the dishes I’ve been enjoying recently at Nabila’s, an impressive new Lebanese restaurant in Brooklyn, have been staples on the Washington party circuit for years, I wasn’t angry. Disappointed, perhaps.

Nabila’s executive chef is Nabila Farah, and the core of her menu originates with her long-running Middle Eastern market and catering service in McLean, Va. Around Washington, Ms. Farah is known for the dinner parties she puts on at her own home as well as those she has frequently catered for the World Bank, the International Monetary Fund and a number of Middle Eastern embassies. I was never invited, for reasons that elude me.

For years now, the diplomatic crowd has apparently known all about Ms. Farah’s sfeeha, their little square pie shells filled with minced beef that hums with cayenne and green peppers. But I didn’t know how good they are until this summer. 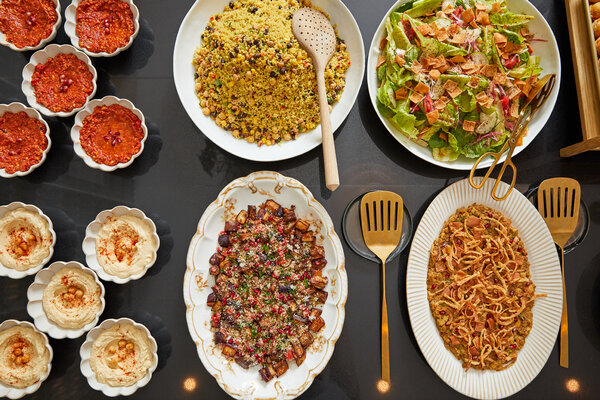 Washington’s elite also chose to keep me in the dark about Ms. Farah’s crisp footballs of kibbe, even the especially alluring ones that have soft pumpkin mixed into their fried bulgur shells and a spicy filling of chickpeas with walnuts inside.

Where was I when trays of Ms. Farah’s fatayer were wafting from kitchens on Massachusetts Avenue? Many miles away, clueless about these little golf-ball-shaped pies whose thin pastry wrappers are filled with spinach that is sharpened and brightened by lemon and sumac.

Well, the secret is out now. I’m willing to let bygones be bygones, particularly because I can just hop over to Cobble Hill and eat at Nabila’s almost any night of the week, while all the people in Washington who snubbed me will have to wait for the next embassy party.

A long composite-stone counter holding renditions of Ms. Farah’s kibbe, sfeeha and fatayer, spread out on trays in neat rows, awaits me as soon as I walk through the corner entrance. The rest of the dishes are on display, too; all I have to do is point out everything I’d like and wait for somebody to bring it all to my table. It is just like a buffet-style cocktail party, but I don’t have to eat standing up.

To the right of the fritters and mini-pies are bowls and platters of hummus, tabbouleh and other dips and salads. This is where you will find Nabila’s excellent muhammara — creamy with roasted red peppers, crunchy with walnuts and tart with pomegranate molasses.

There will be harak osbao, too, tasting better than lentils and pasta cooked to a pulp have any right to taste; the pita chips and fried onions and juicy pomegranate pips scattered over it help a lot, not to mention an unseen quantity of garlic.

More substantial dishes are kept to the left, under the lids of sleek Dutch ovens and casseroles. One will hold rows of pale-green malfouf mahshi, short cigars of rice and beef draped in tender cabbage, a lemony broth dripping from the leaves. In another are sheesh barak, beef dumplings that curve like commas and are baked to a light tan; they are served on top of minted yogurt sauce with toasted pine nuts.

Displaying these dishes in domestic tableware instead of restaurant-supply steel bins typically used in counter-service places underlines the domesticity at the heart of Nabila’s. Ms. Farah’s son, Michael, the proprietor, has said that the goal is to reproduce the look and taste of his mother’s cooking.

A partner in the business, she still lives in Washington, but she has consulted at length with the chef de cuisine, Luis Ahuet.

Nabila’s main dishes are not the kebabs and other grilled meats which for many Lebanese diners are synonymous with eating out. Instead they are drawn from the home-kitchen repertoire. Nor are they broken down into components that can be coaxed into some dramatic pattern — interlocking lamb ribs in a neat triangle under squirted zigzags of sauce. Most of the food comes to the table looking the way it would if you had helped yourself from a platter with a serving spoon.

This is more than a matter of visuals. Lebanese cuisine is full of braises and stews with melded flavors that are almost impossible to achieve with a more photogenic method.

Douse Romano beans and tomatoes with olive oil, season them with black pepper and garlic, stew them until all their crunchiness has been driven out and they relax into a velvety tenderness, and you will have loubieh bi zeit. Nabila’s loubieh looks like a ketchup stain on olive-drab fatigues from an army-navy store, and it is the best plate of green beans I have eaten this year.

The pride Nabila’s takes in its food is so obvious that I’m at a loss to explain the pita. It’s awful, stiff and leathery, not at all what you expect on the edge of one of New York’s oldest Middle Eastern neighborhoods. Al Badawi, the Palestinian restaurant a few blocks away on Atlantic Avenue, bakes fresh pita all day long; maybe they can deliver to Nabila’s.

The bread and any other, lesser misfires, like the dull tabbouleh and fattoush, are quickly forgotten when it’s time to go back to the counter for a survey of the desserts. These are small enough that you’ll want to build a sampler plate and intense enough that just a few will flood your tongue with sweetness: slabs of knafeh, with a scribble of crunchy phyllo threads above rosewater-scented custard; windowpanes of loukoum with roasted nuts embedded in the chewy taffylike candy; bite-size squares of the semolina cake maamoul, sweetened with date paste.

The hardest to resist may be the atayef, a kind of fried turnover that is filled either with nuts in syrup or custard. It is then drenched in sugar syrup. Somehow, the crust stays crunchy. A suggestion, not much more, of orange-flower floats over the proceedings like a promise of a better world.