Rome: The Italian Senate has voted by a large margin to allow the prosecution of right-wing opposition leader Matteo Salvini for forcing 131 rescued migrants to remain on a coast guard vessel for days when he was Italy's interior minister.

Salvini's fellow senators let stand a Senate commission's vote to lift his lawmaker's immunity so the Tribunal of Ministers can decide if he effectively held the migrants hostage last summer. 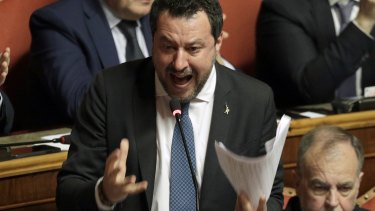 Opposition populist leader Matteo Salvini speaks at the end of the debate at the Italian Senate on whether to allow him to be prosecuted. He asked to have his immunity lifted.Credit:AP

The Senate vote fell 84 short of the number needed to overturn its commission's decision on Salvini's immunity last month. Salvini insisted during Wednesday's pre-vote debate that he would be proud to stand trial for defending Italy's borders, but senators from his anti-migrant League skipped the vote.

Once the tally was announced, he immediately compared himself to impeached US President Donald Trump, who has called the investigations during his presidency as the work of Democratic opponents and vindictive political enemies on the left.

"I, like Trump?" Salvini tweeted. "He has a few more billions and a few more years, but it's a bad little habit of the left, going around in the world, to try to win by judicial means."

As interior minister, Salvini launched a crackdown on unauthorised migration, blaming migrants for crime and other problems. He was also one of two deputy prime ministers at the time. His policies, which included denying migrant rescue ships access to Italian ports, brought his euroskeptic League party support at home and criticism abroad.

"I want to be proud of what I did, with my head held high," Salvini told reporters as the Senate debated his fate. He added: "Our Constitution says that protecting our homeland is a holy duty for Italian citizens."

Politicians from Premier Giuseppe Conte's ruling coalition have contended Salvini wants to boost his popularity among voters by casting himself as a martyr.

Opinion surveys have pegged Salvini as one of Italy's most popular leaders. However, a trial before the Tribunal of Ministers could derail his ambitions to put the League back in power and to become prime minister; conviction carries a prison sentence of six months to 15 years.

Senators from Salvini's party on a Senate commission granted their leader's wishes and voted last month in favour of lifting his immunity, paving the way for the vote.

Salvini professed confidence in the "neutrality" of magistrates "because I believe that what I have done was in the interest of the Italian people."

Prosecutors in Sicily investigated Salvini for alleged kidnapping for keeping the rescued migrants aboard an Italian coast guard vessel for six days last northern summer. Similar stand-offs played out in the Mediterranean Sea during the anti-immigration stance Salvini took as interior minister. 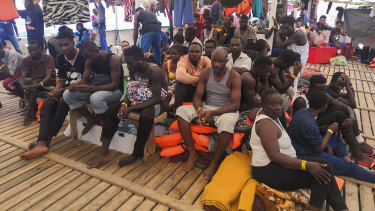 Migrants wait aboard the Open Arms Spanish humanitarian boat in the Mediterranean sea.Credit:AP

An even more dramatic case will come before the Senate's immunity commission later this month. That one involves Salvini's refusal to let around 100 migrants disembark from the Spanish rescue ship Open Arms for three weeks. That stand-off ended when Sicilian prosecutors ordered migrants to land.

In the case pondered by the Senate on Wednesday, migrants had been transferred to the Italian coast guard vessel after some were rescued by a cargo boat, while others were taken from their unseaworthy boat by an Italian border patrol vessel. Libya-based human traffickers regularly launch boats crowded with Europe-bound migrants.

Curiously, twice in the past decade, that same tribunal absolved previous interior ministers of wrongdoing in the cases involving migrants.

Salvini's League is now in the opposition after he pulled his party out of Prime Minister Giuseppe Conte's first government in August in a failed bid for an early election.

By insisting last month on shedding his parliamentary immunity, Salvini gambled he'd win sympathy votes for the League, which was trying to break a decades-long hold by the left in a January regional election in north Emilia-Romagna. But the gamble backfired, at least in the short run, with his party failing to pull off victory.

"Italians are on the side of Salvini" for trying to stop illegal immigration, Senator Daniela Santanche said.

Another opposition senator, Emma Bonino, from the tiny More Europe party, mocked Salvini's arguments that he was protecting Italians from danger.

"Was Italy at risk of being invaded by an Italian military ship? Was state security threatened by Italian sailors and by shipwrecked foreigners who were asking to disembark?" Bonino said.