San Francisco: There are a lot of people who are ruining the United States right now, according to Michael Savage. Representative Alexandria Ocasio-Cortez. Liberal mayors in big cities like San Francisco. Undocumented immigrants. Homeless people. 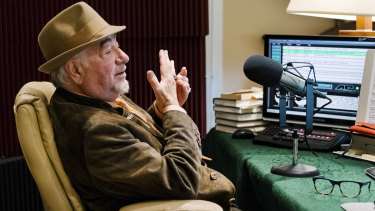 But for the past two months, listeners to Savage's conservative radio show have heard him howl with unabated contempt about another menace: "The pimps" in the right-wing media "who tell you what you want to hear."

They are "intellectual dwarfs" and "science illiterates," he says, who spent weeks downplaying the threat from the coronavirus epidemic and accusing President Donald Trump's opponents of exaggerating it to hurt him politically.

On Savage's broadcast, which has one of the largest audiences in talk radio with 7.5 million listeners each week, the virus has never been a hoax or a bad case of the sniffles. He has lectured his fans on the research in detail: How it is transmitted; which treatments are proving effective; and the difference between morbidity and mortality rates.

With no small amount of self-satisfaction, Savage reminds people of his credentials — a Ph.D. and training in epidemiology — and of the fact that he was one of the few voices in conservative media who had warned them all along.

Much of the time, Savage still sounds like any other right-wing shock jock — making fun of Nancy Pelosi and doubting the validity of the #MeToo movement. But on the subject of the coronavirus, Savage has become one of the loudest voices of dissent on the right.

His views are a striking departure from the accepted version of events among Trump's loyalists in the media, who have made a concerted effort to deny that they downplayed the epidemic — and have helped fuel support for protests against stay-at-home orders in states like Michigan. Savage has attacked the credibility of the conservative media, accused its biggest stars of being too rote and unthinking in their defence of the president, and demanded that they be held accountable for misleading millions of Americans.

"We're living in a terrible time in America where truth has died," Savage, who was one of the first conservative media stars to urge Trump to run for president, told his audience. "This is crazy," he added, pointing to the way the president's defenders always accuse the left of spreading "fake news."

"How can we not let our side be called on the carpet when they lie to the people?"

At the time, coronavirus outbreaks were largely limited to a handful of countries like China, South Korea and Italy. Only a few dozen cases had been reported in the United States. The same day, Rush Limbaugh likened the coronavirus to the common cold on his radio program.

But it spread aggressively in America just as Savage had warned it would — a prediction that earned him the ire of people who called him a hysteric and a sellout.

His contempt for hosts like Limbaugh and Sean Hannity, whose top-rated radio shows draw more than 30 million listeners each week, is especially searing. He mocks them as "Dr. Hannity" and "Rush Limbaugh, M.D., Ph.D.," belittles their lack of education compared with his, and berates people who took their claims seriously.

During one program in early March, for instance, Savage asked why anyone would continue to believe that the virus was being hyped by the president's enemies when Trump himself was taking aggressive steps to slow its spread. Referring to the president, Savage fumed, "Is it because he doesn't know as much as Sean Hannity does? Is it because he doesn't study at the same medical school as Dr. Limbaugh?"

"Do you understand the danger you're in by listening to these people and just following them blindly over a cliff?" he implored his audience.

Hostilities among the bold personalities and big egos of talk radio are nothing new. Savage has always been the misfit of conservative radio who relished taunting his higher-rated rivals.

But his background in science, and a recent heart attack that has reduced his schedule to three days a week, have given him a unique perspective.

Still, anyone tempted to think that Savage is fundamentally gentler and milder needs only to listen to a few minutes of his program.

"I just saw that San Francisco's homeless population are being given hotel rooms, so they can crap on the floor and throw the sheets out the window," he said on a recent show, reacting to the news that some cities were trying to limit the spread of the virus among people who sleep on the streets.

On another day, he questioned whether Harvey Weinstein, the disgraced Hollywood producer, should have been convicted of criminal sexual assault. Referring to the women who accused him, Savage said: "They all went into his apartment. What were they going there for?"

These kinds of provocations will be familiar to fans and critics of Savage, who was once was barred from entering Britain after making inflammatory comments about Islam, including calling the Koran a "book of hate."

Savage's coronavirus crusade is partly a reflection of his training as a scientist. He has a Ph.D. from the University of California, Berkeley, in nutritional ethnomedicine, a field that examines how various cultures and ethnicities use natural products for health purposes. As part of his training, he studied epidemiology. He is a germaphobe and has a survivalist streak. One of the houses he owns in Marin County has its own reservoir.

But his persistence on the issue is also a reaction to his own recent death scare. The heart attack he had in December made the life-or-death nature of a pandemic personal. "I would like to believe that God has kept me here for this reason," he said, calling this "the defining moment of our lives."

At one point he turned to his producer, Jim Verdi, and asked, "When was I this wound up?"

Savage's wife, Janet Weiner, said in an interview that she had noticed more compassion in her husband since his heart attack. And she sees him taking on responsibility for waking people up to what parts of American conservatism, especially in the media, have become.

"This culty hero worship of the uneducated, it's very depressing," she said. "It makes me ashamed to be a conservative," she added, before stopping herself. "I don't want to identify with the conservative movement anymore."

Savage's criticism of the conservative media allows him to sidestep the bigger questions about Trump's leadership.

Nicole Hemmer, a scholar at Columbia University and author of a book on the history of right-wing media, "Messengers of the Right," said that Savage was letting the president off the hook by arguing that people in his inner circle like Hannity are giving him bad advice.

"In a way, he inoculates Trump from criticism by saying it's not necessarily Trump that has bad instincts — it's that he's been misinformed," Hemmer said. She added that Savage was still a lot like other hosts in that "they are all trying to find ways to protect Donald Trump, they just disagree about the method to do that."

The only serious point of disagreement between Trump and Savage is in treating the virus with hydroxychloroquine, which the president has hailed as a potential miracle drug.

"Almost every day now," Savage said in the interview, "I've been warning people about the dangers of this drug."

Faced with his own mortality and the slowing down of his professional life, Savage has sounded sentimental at times. Earlier this month, he told his listeners, "My career will be defined by how I've treated you, my audience, during this epidemic."