Rishi Sunak’s wife was all smiles and hugs as she hosted a breast cancer awareness coffee morning in Downing Street yesterday.

Akshata Murty teamed up with Susie Cleverly, the wife of Foreign Secretary James Cleverly, to welcome charities, campaigners, NHS specialists and those living with or who have survived breast cancer into No10.

Mrs Cleverly has recently spoken of her own battle with breast cancer after being diagnosed in December 2021.

Photos released by Downing Street showed both Mrs Cleverly and Ms Murty sharing a laugh with attendees, while the Prime Minister’s wife was pictured embracing one guest.

The coffee morning took place on the same day as Mr Sunak continued to battle the winter crisis in the NHS, as well as try and deal with disruptive strikes by ambulance workers.

In the House of Commons on Wednesday, the PM also attempted to steer his way through a political storm over whether he uses the NHS himself, or has private healthcare.

Mr Sunak, who enjoys an estimated £730million fortune with Ms Murty, had previously refused to answer questions over his personal healthcare arrangements.

But during yesterday’s Prime Minister’s Questions, he took an earlier opportunity to reveal he is registered with an NHS GP, but has ‘used independent healthcare in the past’. 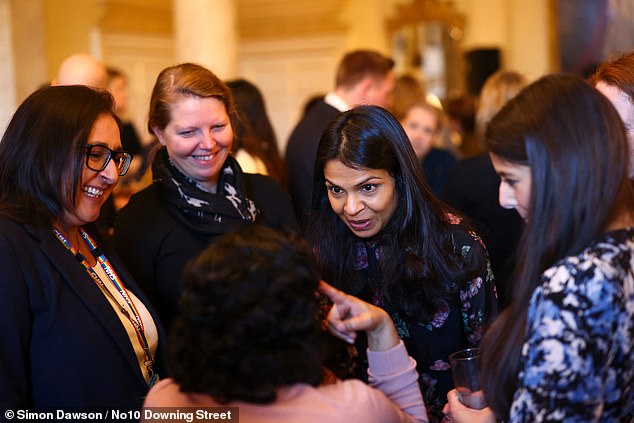 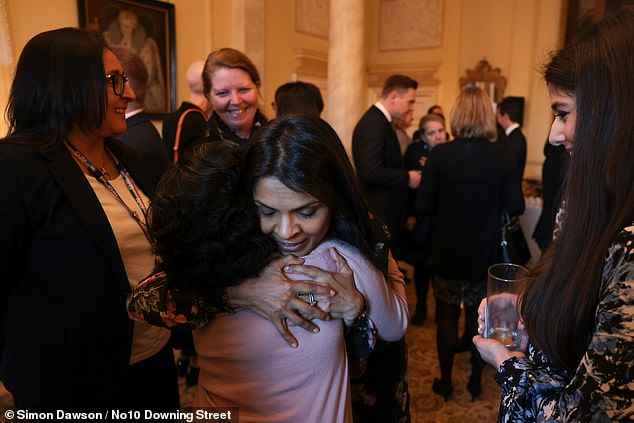 Ms Murty welcomed charities, campaigners, NHS specialists and those living with or who have survived breast cancer into No10 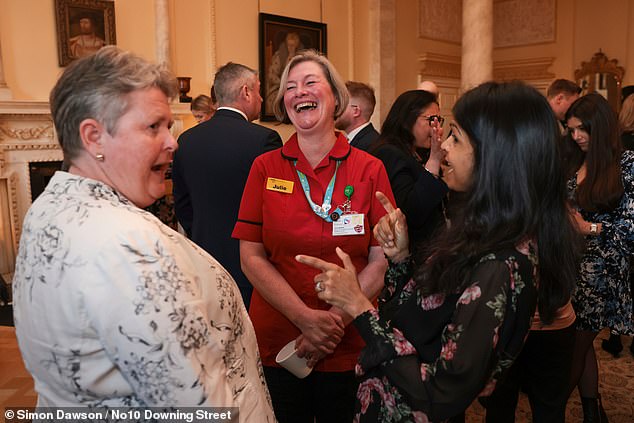 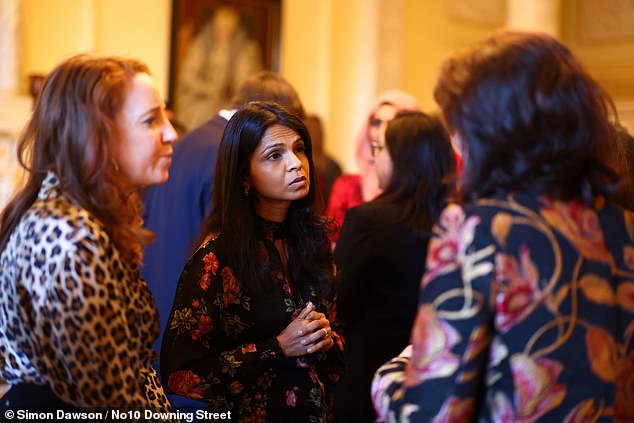 The coffee morning took place on the same day as Ms Murty’s husband, Rishi Sunak, continued to battle the winter crisis in the NHS and deal with disruptive strikes by ambulance workers

The coffee morning hosted by Ms Murty and Mrs Cleverly coincided with the Government’s pledge of an extra £10million to provide 29 new NHS breast screening unites, as well as upgrades to existing services.

Guests included the surgeons who treated Mrs Cleverly, as well as Tory former sports minister Tracey Crouch who completed her own treatment for breast cancer in February 2021.

‘The number of people I have met throughout my own journey now who thought about not going to their screening appointment but did and were diagnosed with breast cancer – it saved their life,’ Ms Crouch said in a video of the event released by Downing Street.

The extra £10million being promised by the Government is set to be spent on 16 new mobile breast screening units, 13 additional static units, 58 live remote access upgrades for existing units and 10 software upgrades to carry out ultrasounds and X-rays.

Health minister Helen Whateley said: ‘The mobile units will be used flexibly to target areas which will most benefit from increased opportunities for screening and the static units will be placed in areas to improve accessibility, uptake and coverage.

‘Those areas with existing units will also benefit from upgrades to improve screening by using the latest technology, ensuring the best possible care for patients.

‘The funding is now in place for NHS trusts to spend within the 2022/23 financial year and the timing for delivery of units will be individual to each trust.’ 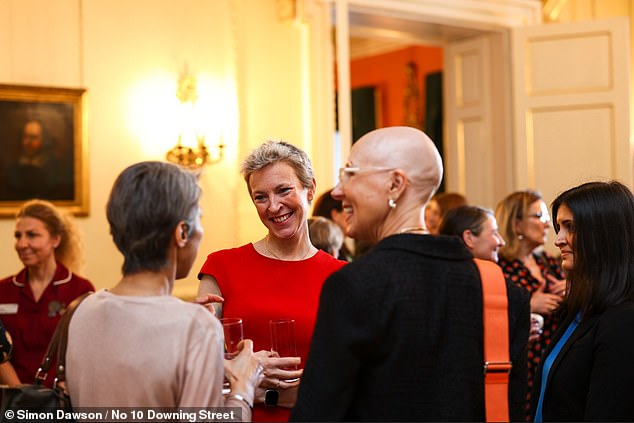 Ms Murty teamed up with Susie Cleverly, the wife of Foreign Secretary James Cleverly, to host the Downing Street event 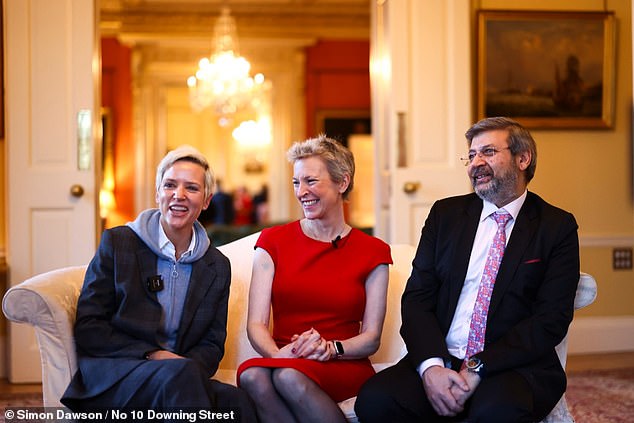 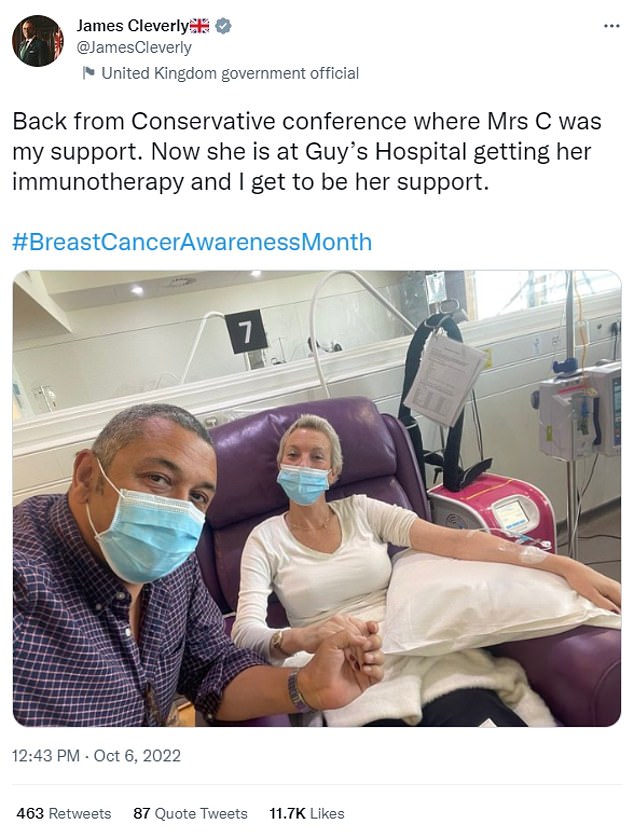 Mrs Cleverly has recently spoken of her own battle with breast cancer, which Mr Cleverly often posted about on Twitter

Steve Russell, NHS national director for screening and vaccinations, said: ‘The commitment to provide additional breast screening units was made in the Women’s Health Strategy published in July 2022 which is designed to improve equality of healthcare.

‘The Government has also committed to improving diagnosis, treatment and survival rates as part of the NHS Long Term Plan.

‘By 2028, the Government has committed to 75 per cent of people with cancer being diagnosed at stages 1 and 2, up from 55 per cent, and for 55,000 more people each year to survive their cancer for at least five years after diagnosis.

‘Continued investment in mobile breast screening units is one of the best ways to increase capacity – screening saves around 1,300 women every year with around 21,000 cancers detected.

‘This is why each year more than two million women have breast cancer screening in the UK.’

Those aged 71 or over are not automatically invited for breast screening but have the right to free screening every three years if asked for.