EXCLUSIVE: Road rage murderer Kenny Noye, 73, is pictured with old flame – a glamorous 59-year-old businesswoman – he has rekindled close friendship with since his release from prison

Road rage murderer Kenny Noye has rekindled a friendship with an old flame he was in a relationship with before he was jailed, MailOnline can reveal.

The double killer moved in with glamorous businesswoman Karen Bricker-Jones after being released from prison for stabbing to death Stephen Cameron.

Noye, 73, divides his time between mother-of-three Karen’s smart mock Tudor four-bedroom home in Surrey and his bachelor flat in Kent.

He has spent time at 59-year-old Karen’s property where he has been seen by neighbours carrying her food shopping and putting out the bins.

The pair have known each other for 40 years. They first met in the Kings Head pub in Bexley, Kent, in 1980 and remained in touch ever since.

Privately-educated Karen has regularly visited Noye in jail where he was serving 25 years for murdering Stephen, 21, on a slip road on the M25, in 1996. 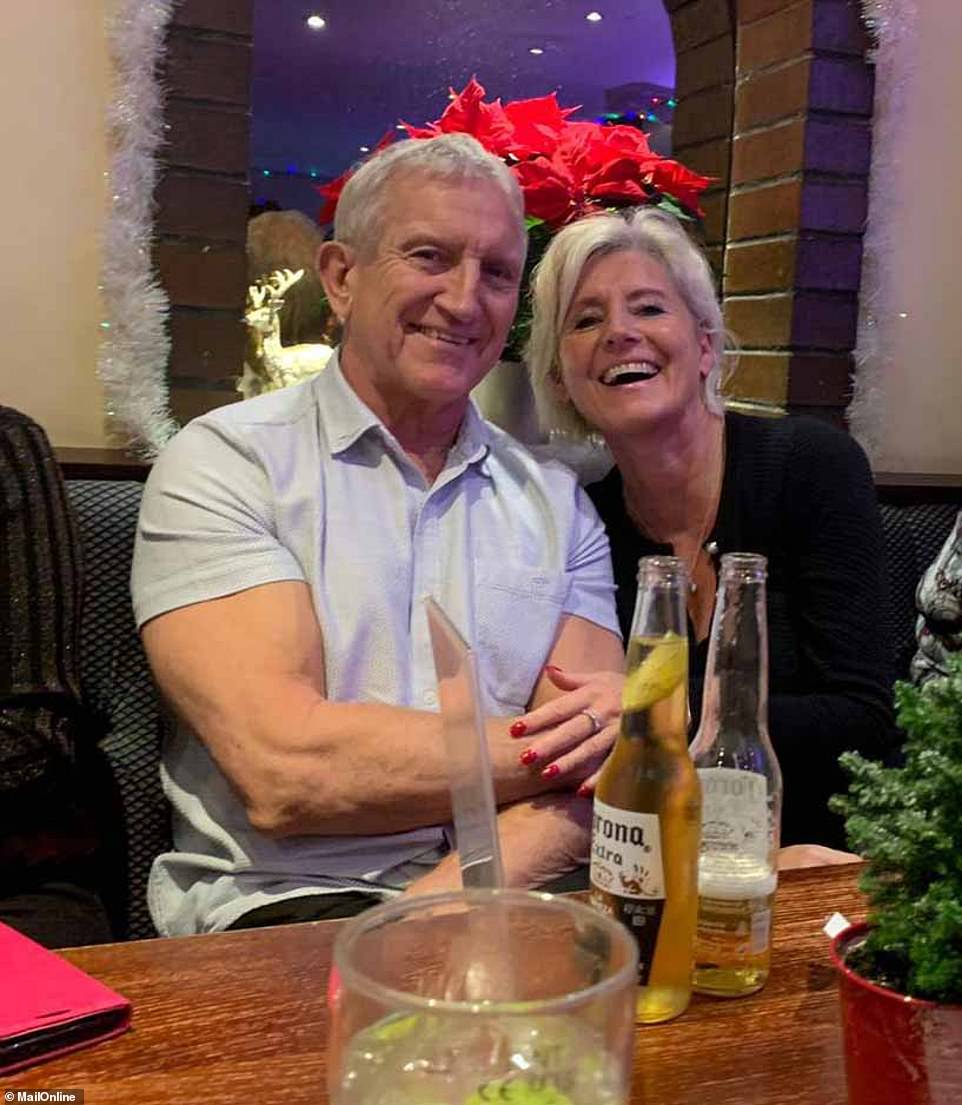 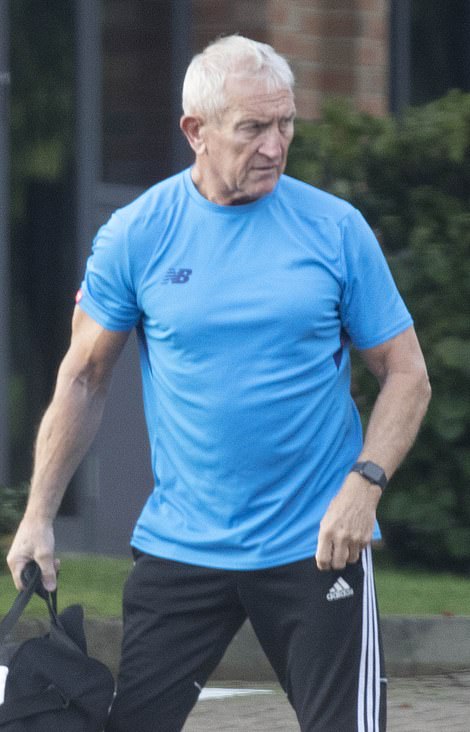 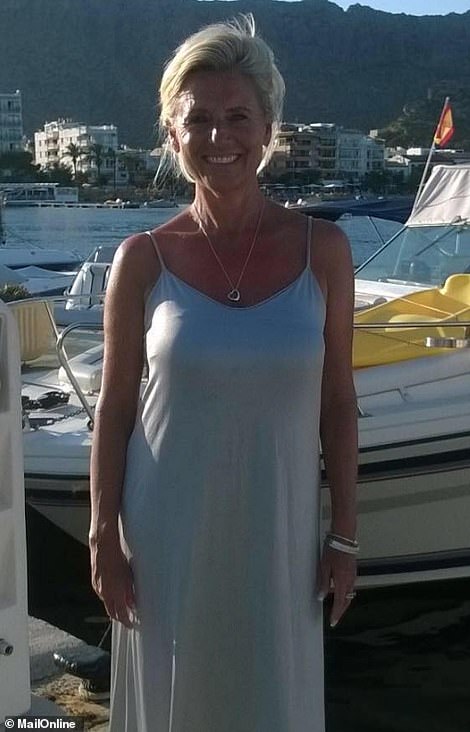 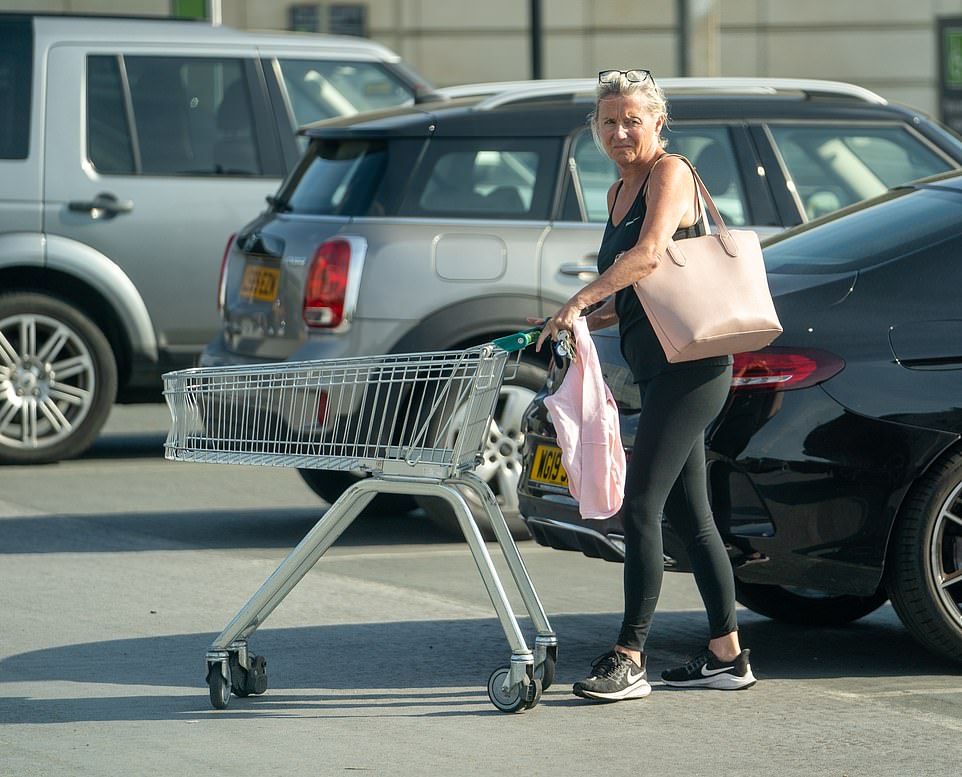 Karen (pictured shopping near her Surrey home) is a glamorous businesswoman who first had a relationship with Noye 40 years ago when she was 19 and he was 33. She remained in contact with him during his time in prison for murder 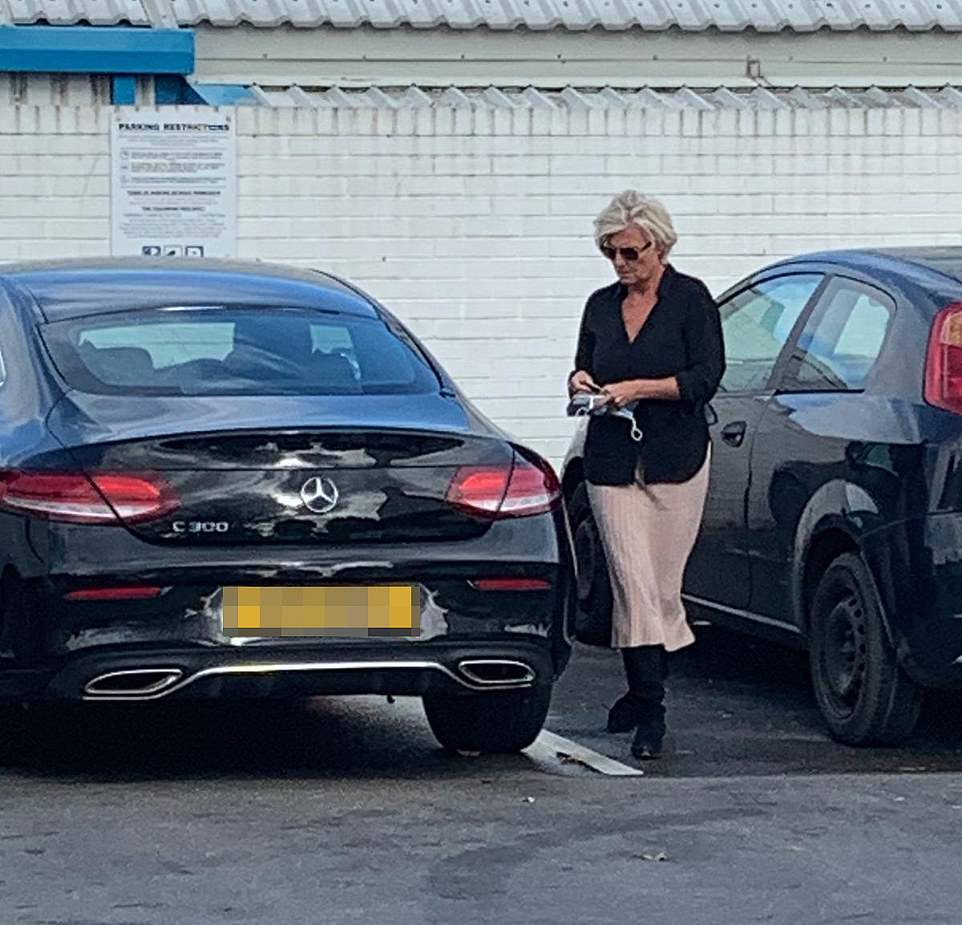 Karen is a mother-of-three who visited Noye in jail and wrote of her delight on Facebook that the pair would be reunited when he was freed last June. Since then the double killer has been seen staying at her property and helping Karen with shopping

A source told MailOnline: ‘Kenny and Karen have known each other for a long time. They enjoy each other’s company. Kenny lived with Karen straight after coming out of prison last summer.

‘He spends more time in Kent now where he has his own place. It’s nearer to where his family is as well.

‘They were an item back in 1980 when she was aged 19 and he was 33. They met in a pub. They are from very different worlds. She went to private school while he has been in and out of prison his whole life. But they’ve always kept in touch. Karen wrote regularly to Kenny while he was in prison and visited him from time to time.

‘Kenny has been spotted staying round at her place but these days their relationship is purely friendship and she’s really helped him readjust to the outside world after he spent the last two decades in a jail cell.

‘Karen has grown up children and is a grandmother now but they are both in very good shape and like going to the gym. Kenny keeps himself very trim and exercises almost every day. He’s in better shape than men half his age.’ 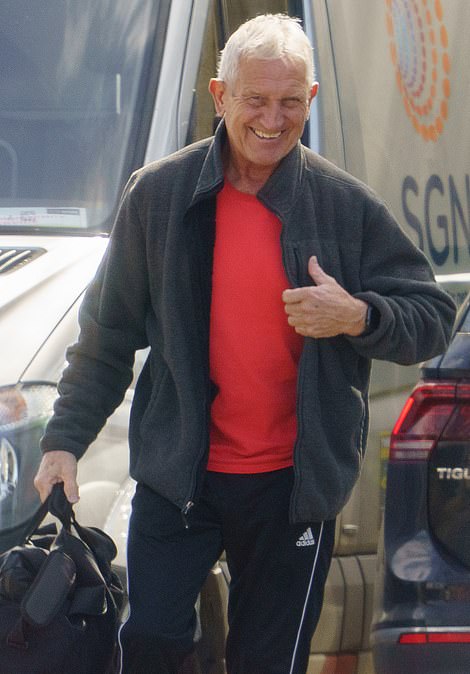 Karen declined to comment about the relationship when approached by MailOnline.

Noye has been seen dropping her off at a Sainsbury’s and Asda supermarkets close to her home in his £25,000 black VW Tiguan.

Dressed all in black, she was pictured most recently buying cleaning products.

Our source added: ‘Because of Kenny’s reputation and criminal past they tend to keep a low profile and aren’t seen in public together very much.’

When Noye was released from jail following a 20-year sentence last June, Karen wrote on Facebook about being reunited with her ‘true love’, adding: ‘When two people are meant to be, nothing and no one can end them.

‘They may get lost a time or two on their journey, but true, real love will always conquer. Nothing can compete with them. Others can only attempt to fill a void. And eventually, the two will be reunited.

‘That’s the beauty of true love, you always end up with the right person at the right time, regardless of any other factor.’

Noye, a career criminal who also served time for the Brink’s-Mat gold bullion heist, is separated from his wife Brenda Tremain, with whom he has two adult sons, Kevin and Brett.

The grey-haired ex-con was pictured a week ago smiling as he posed with an Elvis impersonator at a 50th birthday party in a pub.

At the end of August he was spotted laughing as he walked near a train station basking in the bank holiday sunshine.

Two months earlier he sparked fury when he visited the scene where Stephen was killed.

The killer drove along the M25 slip-road near Swanley in Kent on May 28, just days after the 24th anniversary of the murder.

During his trip, Noye went into Swanley village and was spotted at an Asda store close to St Mary’s Church burial ground where Stephen’s remains lie.Stephen’s late mum Toni’s ashes were scattered there in 2016.

Stephen’s father said: ‘For him to be driving at the same roundabout, and close to the anniversary of the day he murdered my son, is sickening to me.

Ken added: ‘I was told by a probation officer that Noye was not allowed to enter the county of Kent.

‘He’s laughing in the face of authority and pouring salt on my wounds.’ 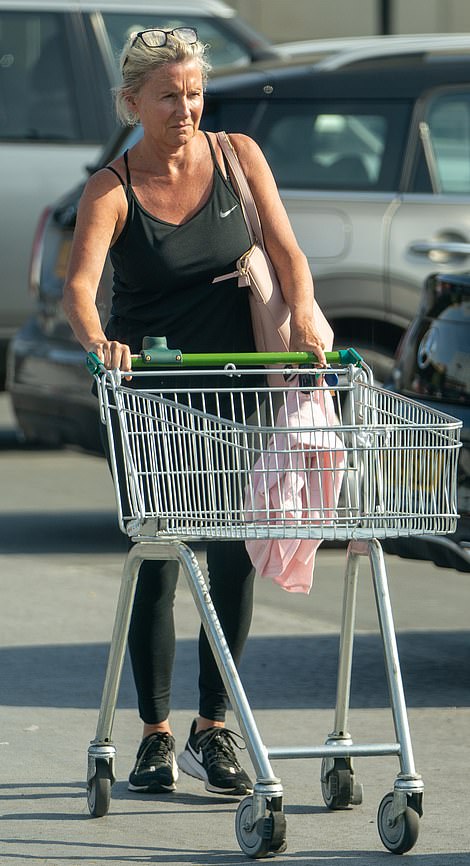 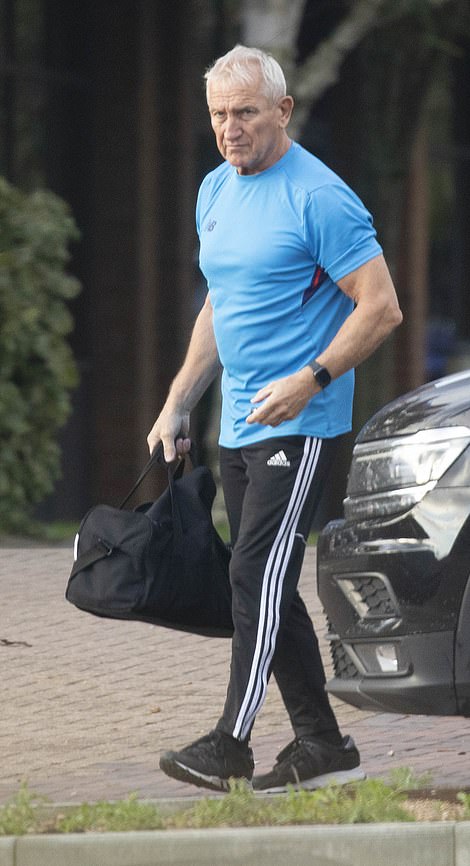 Sources close to Karen (pictured shopping left) say that the pair are just friends and that she has been helping Noye (right) readjust to life outside prison. Karen declined to comment about the relationship when approached by MailOnline 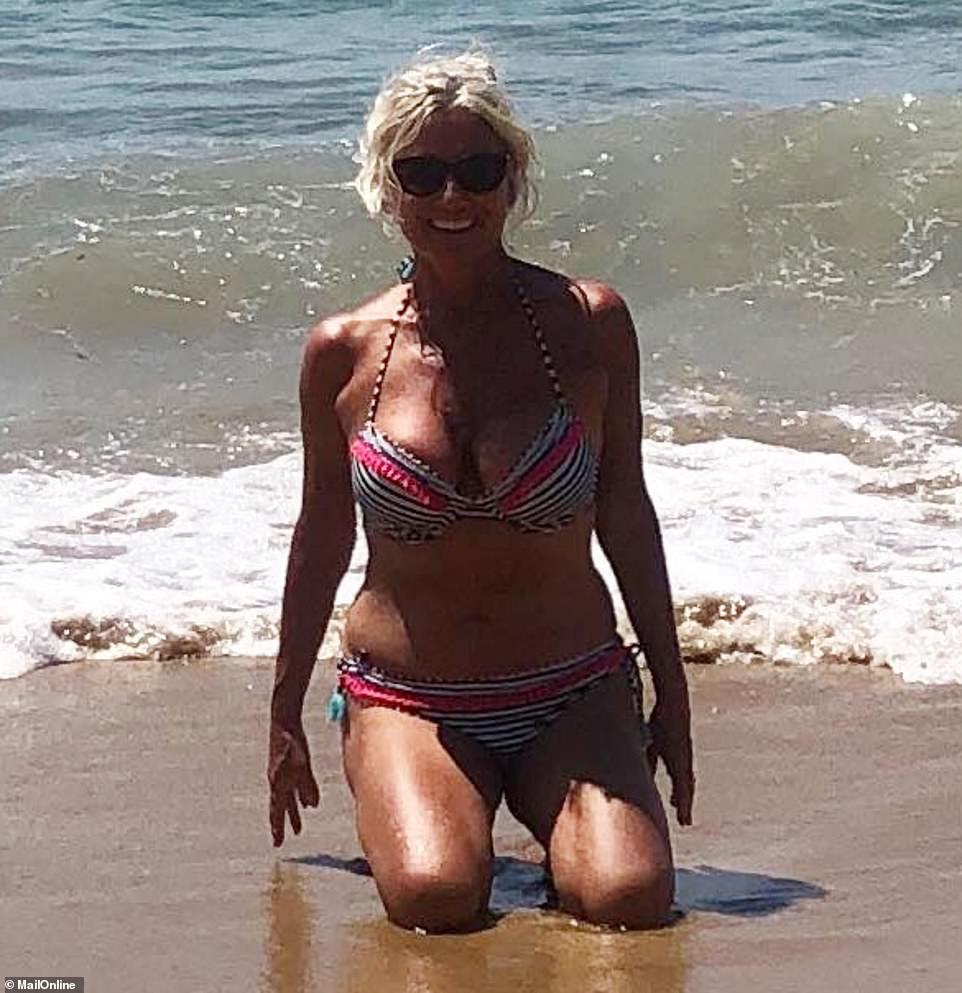 A friend of Karen (pictured above on a beach) told MailOnline: ‘Kenny and Karen have known each other for a long time. They enjoy each other’s company. Kenny lived with Karen straight after coming out of prison last summer’

Probation sources say he would only be barred from going near Stephen’s relatives who no longer live in Swanley.

Noye was living on a 20-acre estate in West Kingsdown, Kent, when he stabbed undercover police officer DC John Fordham ten times in 1985 after finding him hiding in the grounds.

The officer was watching the underworld fence as the Flying Squad probed Noye on suspicion of handling bullion from the £26million Brink’s-Mat raid at Heathrow in 1983.

Noye and Brian Reader, of Hatton Garden heist fame, were charged with murder but acquitted by an Old Bailey jury.

But 11 bullion bars were found at Noye’s home and he and Reader were convicted in 1986 of handling stolen gold.

He made his way to southern Spain where he was captured in August 1998.

His arrest came the day after Danielle was secretly taken by British police to the area and identified Noye from a distance. She remains under witness protection.

Noye was extradited back to Britain in May 1999 and went on trial at the Old Bailey the following year where Danielle bravely gave evidence.