A serving member of the Defence Force has told the Federal Court that war veteran Ben Roberts-Smith and another soldier compromised a surveillance mission in Afghanistan by shooting a young Afghan man.

Person 2, a former Special Air Service soldier who remains in the Defence Force, gave evidence in Sydney on Thursday in Mr Roberts-Smith’s defamation case that the decorated former soldier was one of two soldiers who shot the man in 2006 during a mission to provide surveillance of the Chora Pass. 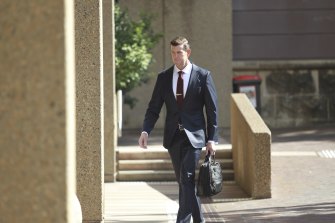 Ben Roberts-Smith outside the Federal Court earlier this week.Credit:James Alcock

He told the court he did not observe a weapon on the young Afghan, although he did see the man retrieving “a bag, a sack of some sort”. He said he did not believe the shooting was “legitimate”.

“Our mission was to observe and surveil. That was our primary mission,” Person 2 said.

Part of that mission was “not to become decisively engaged”, which meant a combat situation that “affects potentially the outcome of the mission”.

“That was to be avoided at all costs, because if an OP [observation post] becomes decisively engaged, then it affects your ability to complete your larger mission, which in this case was to observe and surveil.”

By shooting the Afghan man, Mr Roberts-Smith and the other soldier “compromised the OP, and it compromised our ability to complete that mission and remain undetected”, he said.

The Federal Court has previously heard that Australian SAS troops came under fire from Taliban insurgents after the initial shooting near the observation post.

A serving SAS soldier dubbed Person 1 told the court last week that he was with Person 2 at the observation post, and also observed the young Afghan man. He said he did not see a weapon on the man.

Person 1 was shown an incident report recording that the Afghan man was “armed with an AK varient [sic] weapon”, “aggressively patroling [sic]” with “both hands on weapon” when he was shot. The report said the man was shot by two soldiers, identified by their call sign. Person 1 said he believed one of the call signs belonged to Mr Roberts-Smith.

Under cross-examination by Mr Roberts-Smith’s barrister, Bruce McClintock, SC, Person 1 agreed that it had always been his view that it was legitimate to assess the Afghan man as a threat and to kill him.

Mr Roberts-Smith launched defamation proceedings in 2018 against The Age, The Sydney Morning Herald and The Canberra Times over a series of articles that he says accuse him of being a war criminal, among other claims.

He denies all wrongdoing. The media outlets are seeking to rely on a defence of truth and allege Mr Roberts-Smith committed or was involved in six murders of Afghans under the control of Australian troops, when they cannot be killed under the rules of engagement.