UK-based activists, who hail from opposite sides of Myanmar conflict, on why Rohingya repatriation plan is not solution. 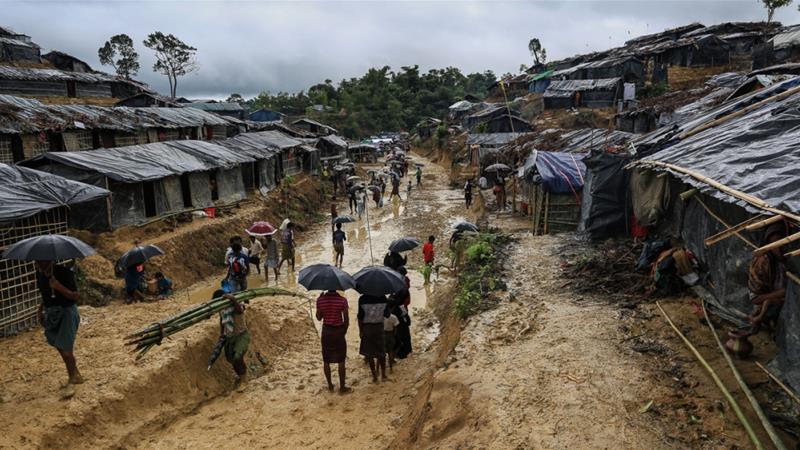 There are already about one million members of the persecuted, mostly Muslim minority struggling in overcrowded camps in the South Asian country.

They have fled what several international leaders have termed a genocide in Myanmar, their home country where they are not granted the simplest of rights – including citizenship.

Victims and rights groups have provided evidence of a campaign of ethnic cleansing. Myanmar security forces are accused of raping Rohingya women, tossing babies into fires, burning down entire villages and slaughtering thousands.

In January, Bangladesh and Myanmar announced a repatriation deal, prompting concerns from rights groups and members of the Rohingya.

The Rohingya were not consulted about the agreement, which does not guarantee safety upon return or basic rights such as full citizenship.

“Some people asked me – how can we return to this place?” says Tun Khin, a Rohingya activist and the head of the Burmese Rohingya Organisation UK, who visited camps in Bangladesh last week.

“It is a joke. It is not the time to talk about repatriation,” he adds.

On Thursday, Tun Khin will address students at the University of Oxford, a symbolic location.

Students there, angered that Aung San Suu Kyi remained a revered figure across campus as the crisis unfolded in Myanmar, recently succeeded in removing her portrait from the entrance and name from a common room.

Tun Khin will be joined on the panel by Maung Zarni, a member of Myanmar’s Buddhist majority who hails from a military family. The scholar and activist, who is also based in the UK, says he is in “complete opposition to what my own community is doing to Tun Khin’s community”.

Al Jazeera spoke with Tun Khin and Zarni on plans to repatriate the Rohingya, the West’s role in ending persecution and the apparent failure of the UN Security Council to stop the bloodshed. 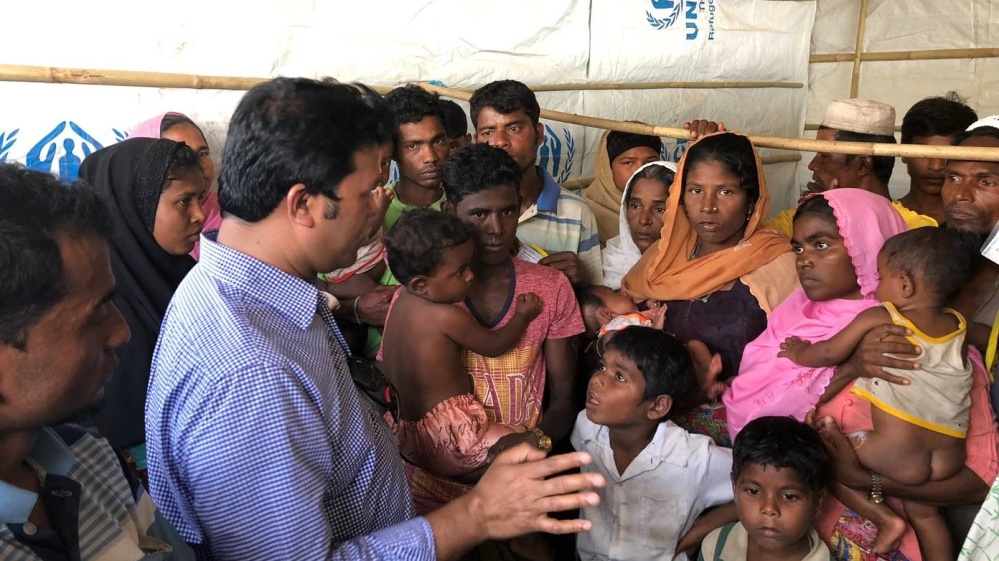 Al Jazeera: Earlier this month, Boris Johnson, the UK‘s foreign secretary, returned from Myanmar and Bangladesh and said there was no doubt “industrial ethnic cleansing” of Rohingya Muslims had been taking place. Does this statement from a Western figure mark some kind of a turning point?

Tun Khin: As a Rohingya myself, I am a victim of genocide. This is not something that is happening just right now, it’s been happening since 1978 when my mother was pregnant with me. I was born in Burma. My family fled to Bangladesh, and came back without any citizenship.

(Note: In 1978, Myanmar drove out “illegal” residents. Many Rohingya fled to Bangladesh but returned following international pressure. In 1982, Myanmar’s Citizenship Law deprived the Rohingya of citizenship.)

The West knows what has been happening. There are well documented UK and US embassies in Yangon – they are all aware of what’s been happening over many years to the Rohingya.

What’s been happening since August is clearly a genocide, which they knew about.

It’s good to see Boris Johnson visited, but we haven’t seen any significant action from the UK government to stop this genocide.

Maung Zarni: The Rohingya and Burmese Buddhists and other ethnic communities – we belong in the same country. Tun Khin’s community has been singled out for, essentially, intentional destruction from its very root. This has been going on for 40 years since 1978 [and] the UN and its member states and the UK, US – they know more than enough to determine that this is a classic case of a genocide.

Before this exodus, Yangon was the place every world leader and delegation went – they wanted to meet with Aung San Suu Kyi, they wanted to visit her home.

Now, Burma is no longer democratising, Burma is actually going backward and moving in the fascist direction.

Now, every single iconic figure with concerns about refugees is travelling to Bangladesh. Hollywood stars, heads of states, and Boris Johnson. I must say I am a little bit encouraged by the fact Johnson went there, he went strongly in support of the Rohingya and called it “industrial ethnic cleansing”.

But I am very concerned [the West continues to] express support for Aung San Suu Kyi and portray her as the only hope and prospect for democratisation.

She is part of this genocide.

Al Jazeera: As you have mentioned, the language used by some international figures refers to “genocide”, while rights groups have spoken of an “apartheid”. Why does action not match this rhetoric?

These are three major permanent UN Security Council members. You cannot describe a situation like this and then not consider very forceful options, even if the Burmese government and its neighbours are unprepared to act.

[Then there are] Islamic countries such as Turkey and Egypt recognising this as a major atrocity and crime.

We need a coalition of seriously concerned governments deciding what to do to. 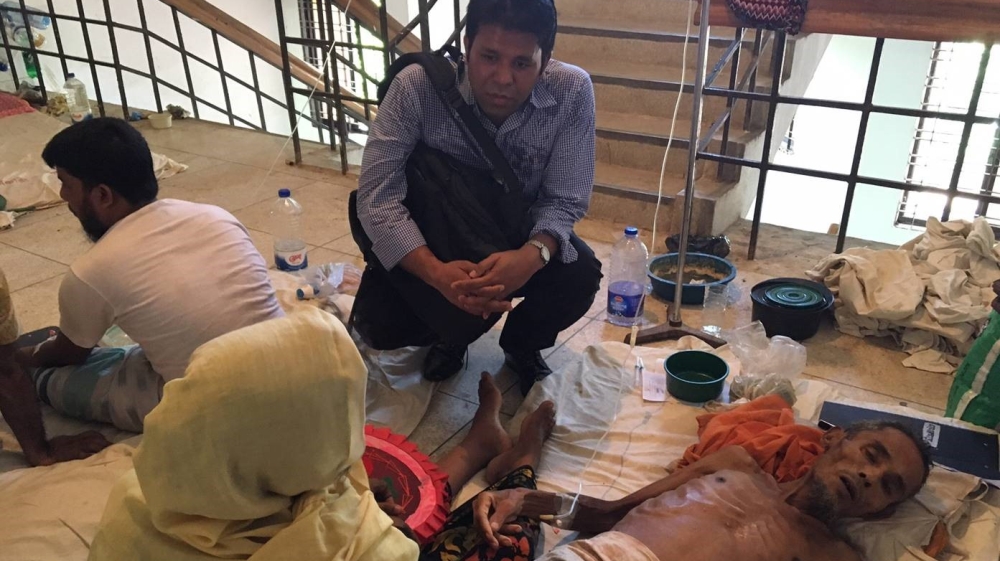 Al Jazeera: What does concrete action look like to you?

The Rohingya want safety and protection – so we need a UN-protected area for their return.

Zarni: Before we can take any action, we need to accept the reality. The reality is that Burma – the society and military and government of Aung San Suu Kyi – has shown absolutely no indication that it will accept the Rohingya as an ethnic community who deserve full and equal citizenship as well as basic human rights, like everyone else in the country.

When you have a situation where the entire society and entire military and entire political class have rejected an ethnic community, then it is dishonest for any politician and any UN official leader to keep saying they want to see voluntary safe and dignified return.

Return is no longer an option. If the Burmese army or Aung San Suu Kyi said they want to receive the Rohingya back, that is simply a deception to try to defuse the international attention and get the international community off its back.

What the Rohingya need is a piece of earth that they can call their home, where they don’t need to worry about being slaughtered or their houses and villages being burned.

What we need to see is a small number of genuinely concerned leaders around the world to call a special conference to create an autonomous region for the Rohingya, where they can feel safe and protected by the UN and neighbouring government of Bangladesh and others. I don’t think any other solution will work.

We are not talking about [for example, the] creation of a Jewish state out of Palestine where there were already pre-existing populations that got kicked out. We are simply looking at the land where Rohingya were kicked out from, where Rohingya belong.

Tun Khin: These people have been in trauma – they are not talking about returning. Some people ask me, “How can we return to this place?” There is no way to return.

Some who fled recently told me the military came to their village and told them they needed to go to an immigration office. When they left, the military burned down their homes. When they got back, the military arrested them, claiming they had burned their own houses. They were arrested for 10 days until they could pay the military a big bribe.

The people want UN protection – international protection. Everyone sees Rohingya as illegal immigrants, and says, “Just kill them all.”

Nobody will return unless there is forced repatriation. 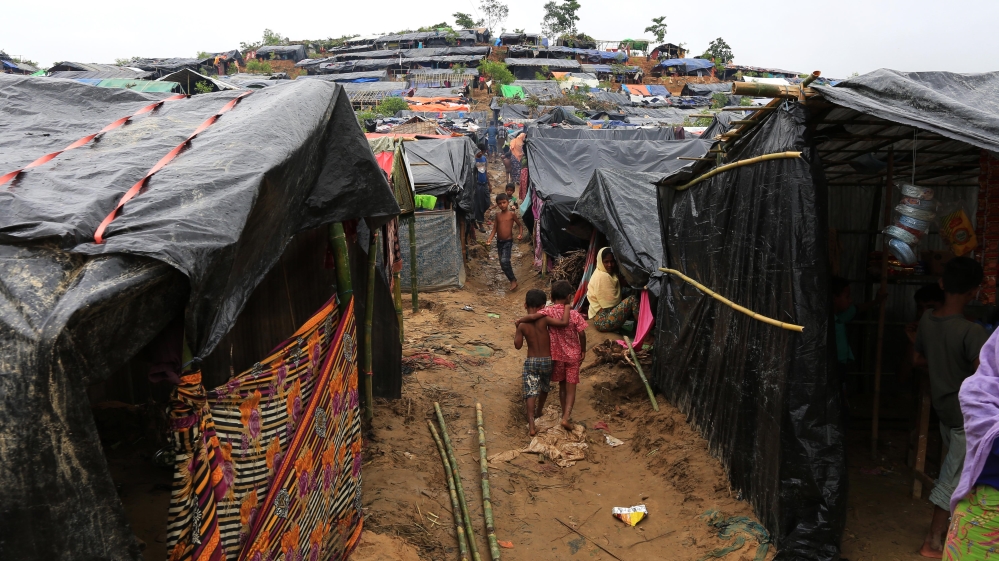 Al Jazeera: While you both seek an autonomous region for the Rohingya, what other scenarios could be expected regarding repatriation?

Zarni: It’s in the interest of the Bangladeshi government to try to get as many Rohingya as possible returned to Burma – this is a large number of humans that Bangladesh is being burdened with. We need to understand frustrations and fears of Bangladesh of shouldering one million people on top of its 166 million.

From the Burmese military’s perspective, they would want this process of repatriation to be drawn out as much as possible.

[Repatriation] is like telling Auschwitz survivors to go back and make a living in Auschwitz.

Al Jazeera: In Bangladesh, as well as overcrowding issues in the camps, what other challenges do the Rohingya face?

Zarni: The danger here is that thousands of Rohingya are facing health and existential crises. In the next three to four months, there will be monsoon season.

They are in a low-lying area and Bangladesh is flood-prone. They are facing the extremely dangerous prospect of being washed away.

The outbreak of infectious diseases, diarrhoea and what not [is also a concern].

And then you have another 500,000 trapped inside Burma, whose lives are squeezed by the Burmese military.

Al Jazeera: In a few days, you will speak at the University of Oxford, where Aung San Suu Kyi is a noted graduate. Why is the location important?

Zarni: Oxford University is playing this bystander role. It is looking on when genocide is happening under the watch of its most famous alumna.

The university maintains official ties with the University of Yangon, where genocidal views are espoused.

Oxford also has an exchange programme for Burmese scholars and researchers. They become more articulate and better educated and use the Oxford training to justify the genocide of the Rohingya and to cover up.

We want students to tell the Vice-Chancellor Louise Richardson to cut institutional ties with Yangon, to strip Aung San Suu Kyi of her doctorate. If the university doesn’t have precedent, it should make an exception.

Tun Khin: As a Rohingya myself, I want to bring the messages of the victims to the University of Oxford.

This interview has been edited for clarity and length.