Runner, 53, who vowed to complete a marathon EVERY DAY of the year in bid to raise £1m for charity crosses the finish line after completing his 365th 26.2mile course

A fundraiser who vowed to run a marathon every day of 2022 to raise £1 million for charity has crossed the finishing line.

Gary McKee, 53, finished his 365th marathon of the year on New Year’s Eve, completing a challenge that has ‘sprinkled magic’ on his community in Cleator Moor, Cumbria.

The father-of-three went through 22 pairs of trainers and ran 9,563 miles in rain, snow and sunshine to raise money for Macmillan Cancer Support and Hospice at Home West Cumbria.

He generally began his 26.2mile route at 6am before shifts working as group leader at nuclear site Sellafield. 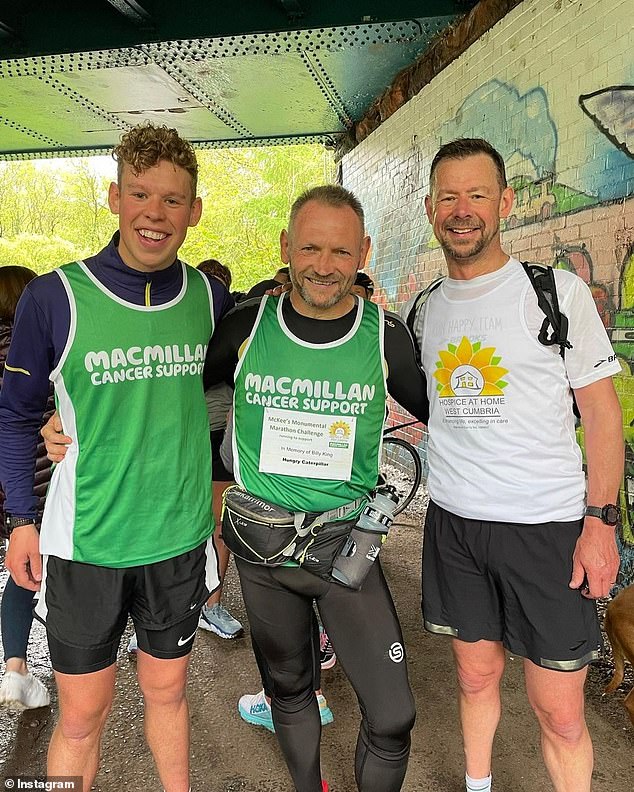 Gary McKee, 53, completed his 365th marathon of the year on New Year’s Eve, a challenge that has ‘sprinkled magic’ on his community in Cleator Moor, Cumbria 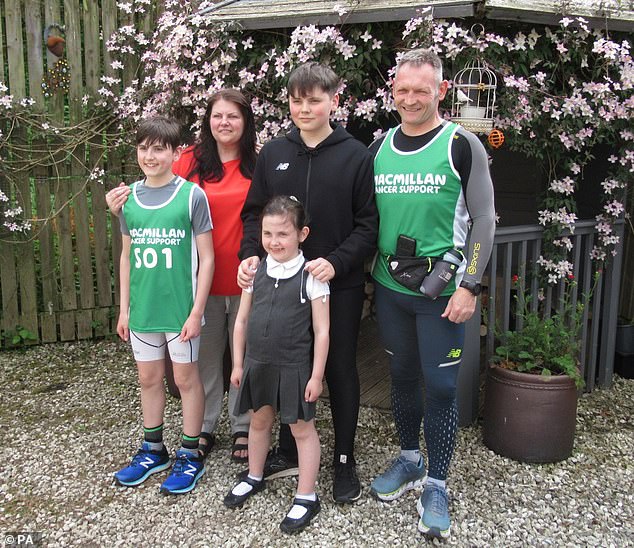 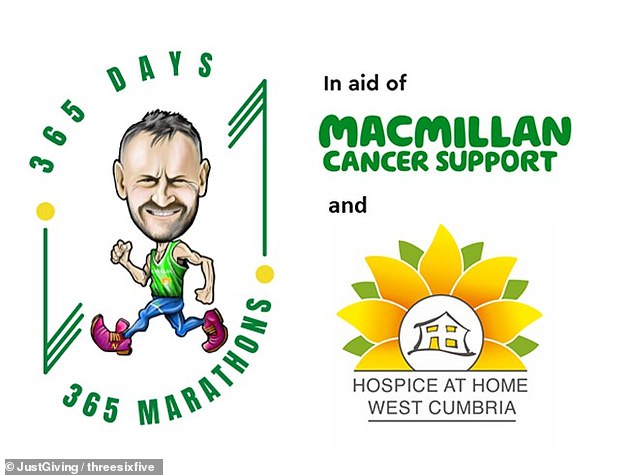 The father-of-three went through 22 pairs of trainers and ran 9,563 miles in rain, snow and sunshine to raise money for Macmillan Cancer Support and Hospice at Home West Cumbria

McKee has raised more than £900,000 for the two charities on JustGiving, an online fundraising platform. A video on his Instagram page also shows that he has passed the £1 million target overall

Mr McKee has raised more than £900,000 for the two charities on JustGiving, an online fundraising platform. A video on his Instagram page also shows that he has passed the £1 million overall target.

At the starting line of his 365th marathon in Cleator Moor on Saturday morning, Mr McKee told BBC One’s Breakfast that he was a little nervous ahead of the final challenge.

He said: ‘It’s not the distance, it’s because it’s the last one. It’ll be a special day. Cancer affects everybody so it isn’t just a West Cumbrian thing, it’s a national thing.’

Director of funding and communications for Hospice at Home West Cumbria, Hayley McKay, said: ‘It’s difficult to put into words how grateful we are to Gary for taking on this unbelievable challenge.

‘The physical and mental strength he has shown is incomprehensible.

‘Gary has not only raised money for two fantastic charities, he has sprinkled magic on the local community and brought people together supporting him with the challenge.’ 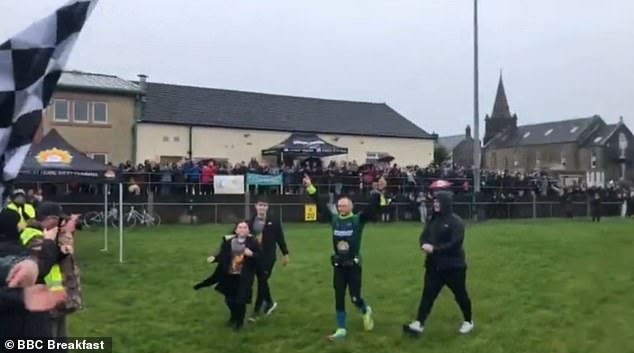 Macmillan Cancer Support executive director of fundraising, Claire Rowney, added: ‘Every single day this year, this extraordinary man has put his body through a marathon to raise money for Macmillan and our friends at Hospice at Home West Cumbria.

‘I can only imagine the self-discipline and determination required to achieve this and there aren’t enough words to express our heartfelt gratitude for everything that he has done to help Macmillan support people living with cancer at a time when they need us more than ever.’

Mr McKee has also inspired others to join him.

Chris Young, 29, who ran 90 marathons with Mr McKee, said: ‘Gary ignited a fire in my belly this year when I began running frequently with him and has given me both physical and mental resilience that I don’t know if I would have ever discovered in myself in a million years.

‘There’s going to be a lot of people’s lives a lot better off thanks to Gary’s efforts, myself included.’ 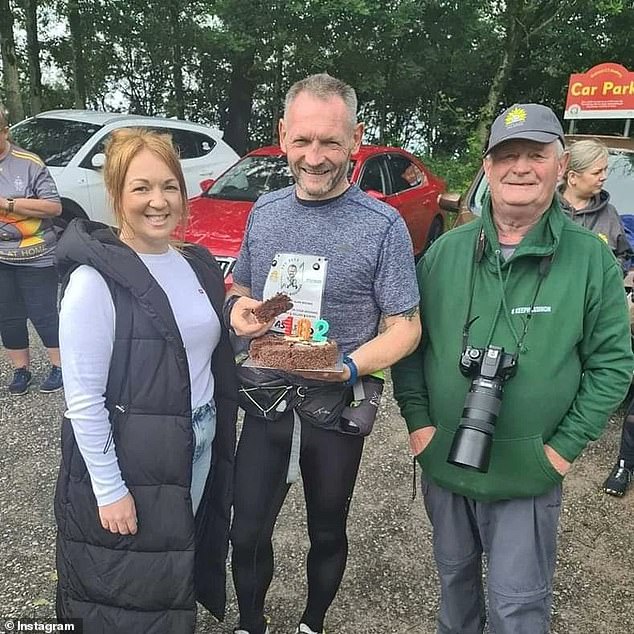 He said: ‘He’s a brilliant man and it was an honour to be with him in Cumbria to support what he’s doing.

‘He supported me in my last challenge and it was really nice to get together and run and chat and laugh with him.’

Supporters cheered Mr McKee along the streets of Cleator Moor for his final run. He is set to celebrate at the town’s rugby league club, Wath Brow Hornets.

When Mr McKee took part in his first London Marathon, he ran to the city from his home town.

Over the last year, Mr McKee has followed the same route every day, aside from five organised marathons.

He started and finished at his home, running along a former railway line converted into a cycle path.

Halfway round the route, which has impressive views of the Lake District’s western fells, supporters often gave him cake and tea.

At the start of the year Mr McKee picked up a hamstring injury, which he put down to running too fast. However, he still managed to carry on.

Mr McKee has been a fundraiser for Macmillan Cancer Support for almost 20 years. In that time, he has cycled through Brazil, climbed Kilimanjaro and trekked through New Zealand. 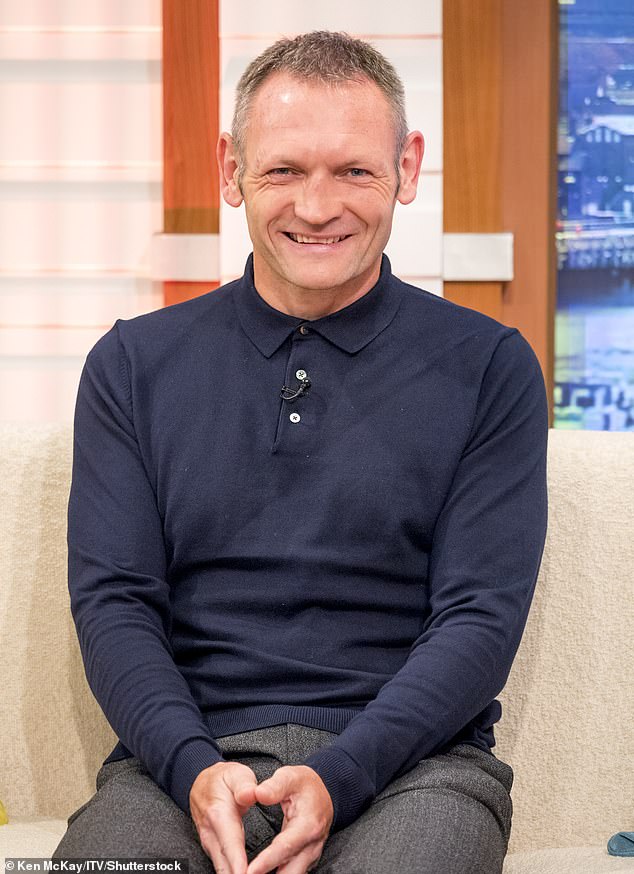 Gary McKee generally began his 26.2mile route at 6am before his shift as group leader at nuclear site Sellafield

Mr McKee’s father, Victor, was diagnosed with cancer in 1997 and eventually died in 2005 from an unrelated illness. Mr McKee became a fundraiser for Macmillan to honour him.

On his JustGiving page Mr McKee wrote: ‘Due to Covid most charities suffered big financial losses with all the major fundraising events cancelled.

‘Hospice at Home West Cumbria were no exception and I wanted to raise much needed funds and awareness of the charity and celebrate the fantastic work that they do.’