The “medical checks” which locals say are unprecedented follow a visit to Nyonoksa by “people in military uniform” to note the names of every local who was present when the accident happened. There is speculation Russia was testing a superweapon when a feared nuclear leak occurred deepening the misery over the incident. A local woman was quoted by regional news source 29.ru saying: “There were messengers in military uniform. They wrote down names of everyone who was here on 8 August.

“We were told doctors from Moscow will come here to see them.”

Another source confirmed they had been told specialist medics would come to Nyonoksa, 810 miles north of Moscow.

“They said that the doctors are from Moscow,” said the resident.

The report said such checks had never occurred previously.

If confirmed, it suggests official concern over the potential impact of the explosion.

The medical checks come one week after the mysterious incident which led to a “radiation spike” in nearby city Severodvinsk.

Levels of radiation were reported to be up to 16 times the normal level. 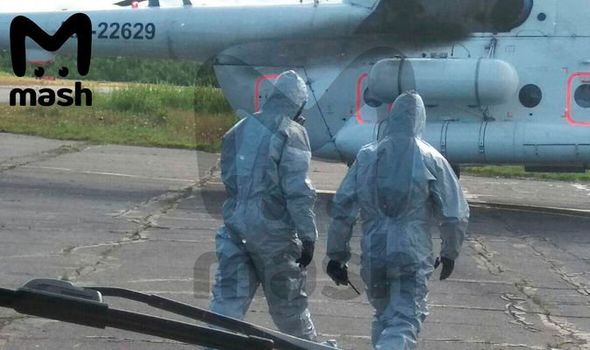 It is known that people injured in the explosion have been taken to a medical facility in Moscow that specialises in radiation.

So have medics who were the first to treat these victims.

The population of Nyonoksa, in Arkhangelsk region, is around 500.

It is not known how many people were present when the explosion happened.

Earlier this week the authorities announced an evacuation from Nyonoksa, and then abruptly “postponed” it.

Norway said on Thursday it had detected tiny amounts of radioactive iodine in a region bordering Russia after an explosion at a Russian missile testing site.

The sample was collected at an air filter station in Svanhovd between 9-12 August.

“At present it is not possible to determine if the last iodine detection is linked to the accident in Arkhangelsk last week,” said the Norwegian Radiation and Nuclear Safety Authority.