Russian death toll in Ukraine ‘reaches 18,300’ as Kyiv reclaims more towns and blitzes convoys – but Putin’s forces kill eight in the south in latest round of shelling

Vladimir Putin’s faltering invasion has suffered another devastating blow after his force’s death toll rose to 18,300 according to Kyiv estimates and battling Ukrainian troops reclaimed more towns in the north.

Russia has only admitted 1,351 of its troops have died fighting in Ukraine since Putin invaded on February 24, a fraction of the figure estimated by Ukraine’s armed forces.

In a further blow to Putin’s war, Ukrainian forces have also retaken some towns in the northern Chernihiv region, whilst Russian forces no longer occupied any areas in the Sumy region, in Ukraine’s northeast.

Ukrainian soldiers also blitzed a Russian military convoy in an effort to disrupt deliveries of fuel and supplies to Putin’s troops on the frontline, with video showing a military tanker being hit by what appears to be a rocket before bursting into flames.

But Russian attacks on civilian areas have continued, with eight people killed and 34 wounded after shelling hit the southern Ukrainian cities of Mykolaiv and Ochakiv on Sunday, prosecutors in Kyiv said.

‘As a result of enemy shelling, seven residents in Ochakiv were killed and another 20 were injured. In the city of Mykolaiv one person died and 14 people were wounded, among them a child,’ it added.

Meanwhile, Russia is continuing to build up both its soldiers and mercenaries from the notorious Wagner Group, a private military company known as ‘Putin’s private army’, in eastern Ukraine, British intelligence chiefs said.

Across the country, Ukrainian forces are also preparing for what its general staff said were about 60,000 Russian reservists called in to reinforce the offensive there. 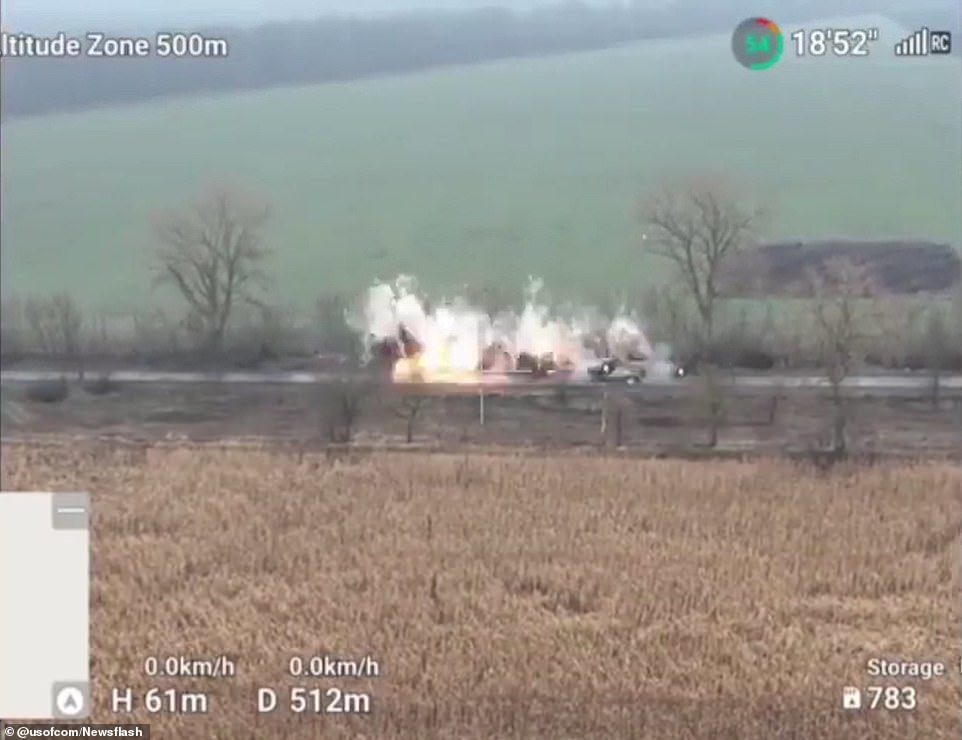 Ukrainian soldiers also blitzed a Russian military convoy in an effort to disrupt deliveries of fuel and supplies to Putin’s troops on the frontline, with video showing a military tanker being hit by what appears to be a rocket before bursting into flames 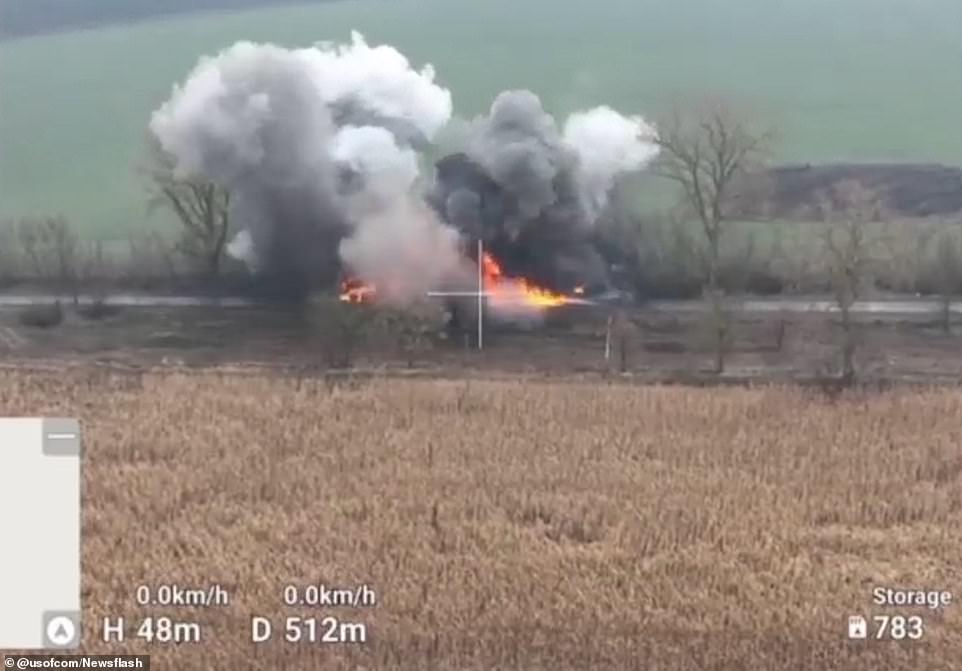 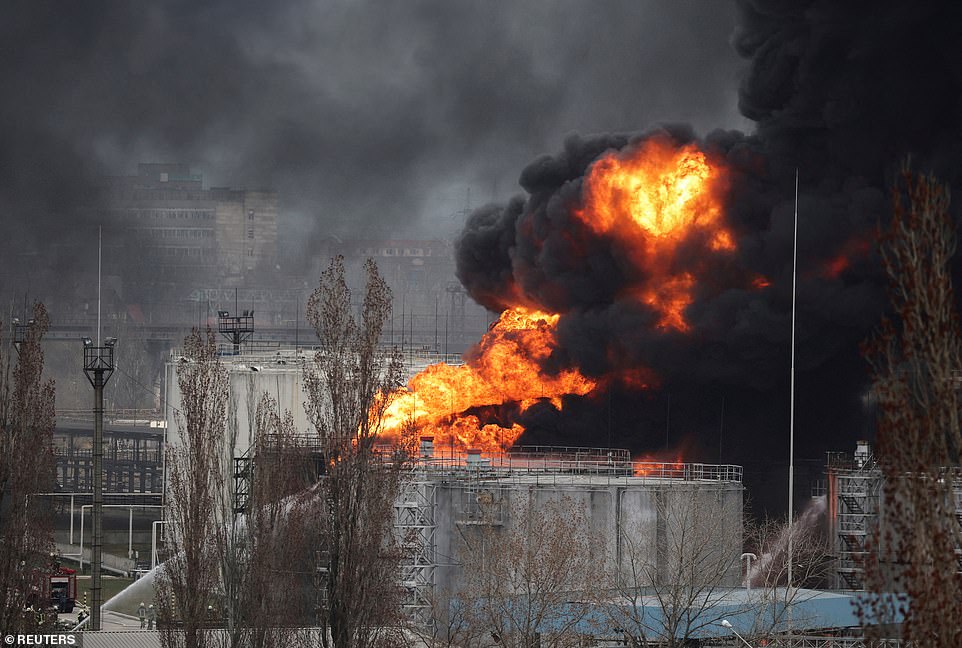 Russian missiles struck near the southern port of Odesa on Sunday, with Russia saying it had destroyed an oil refinery used by the Ukrainian military 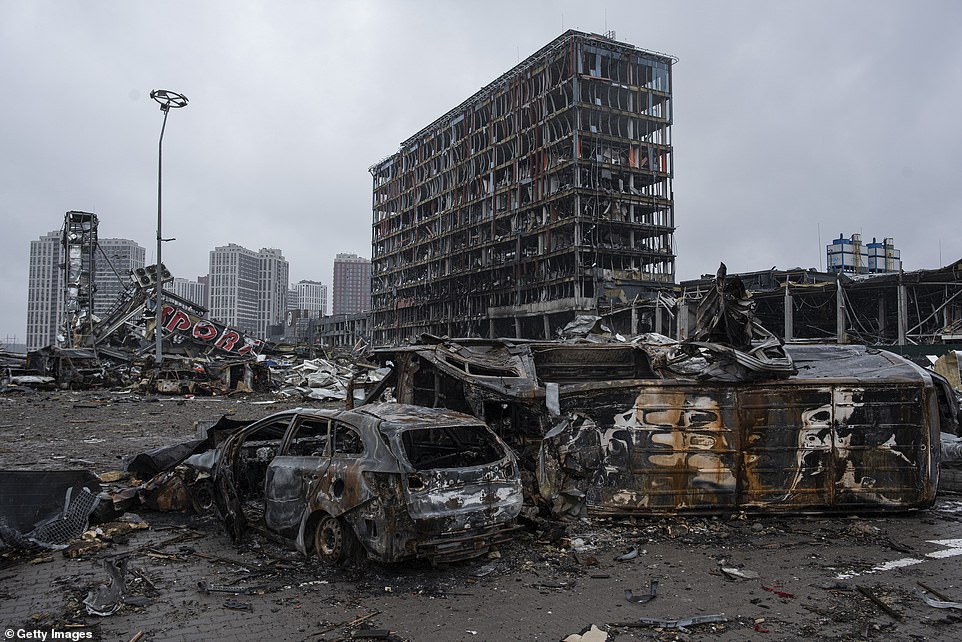 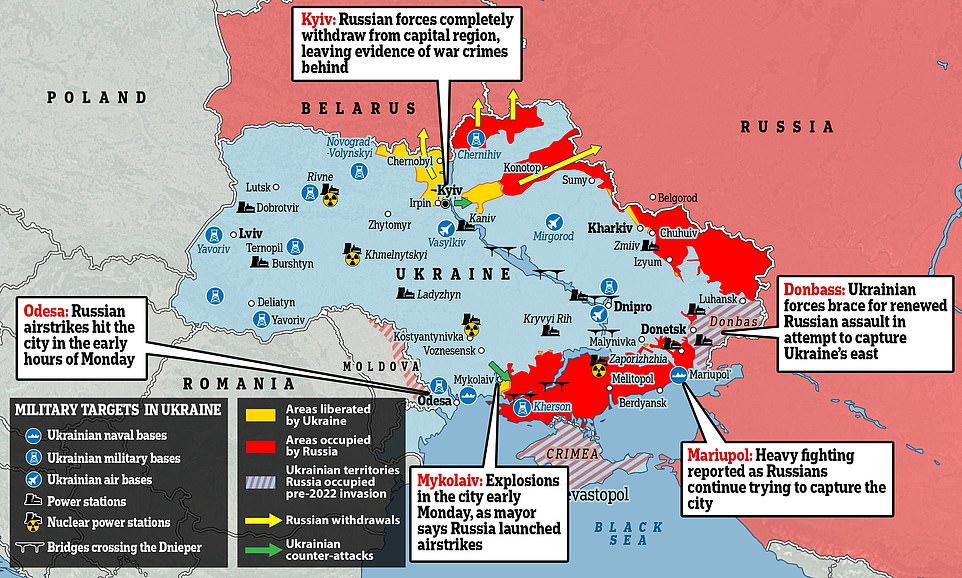 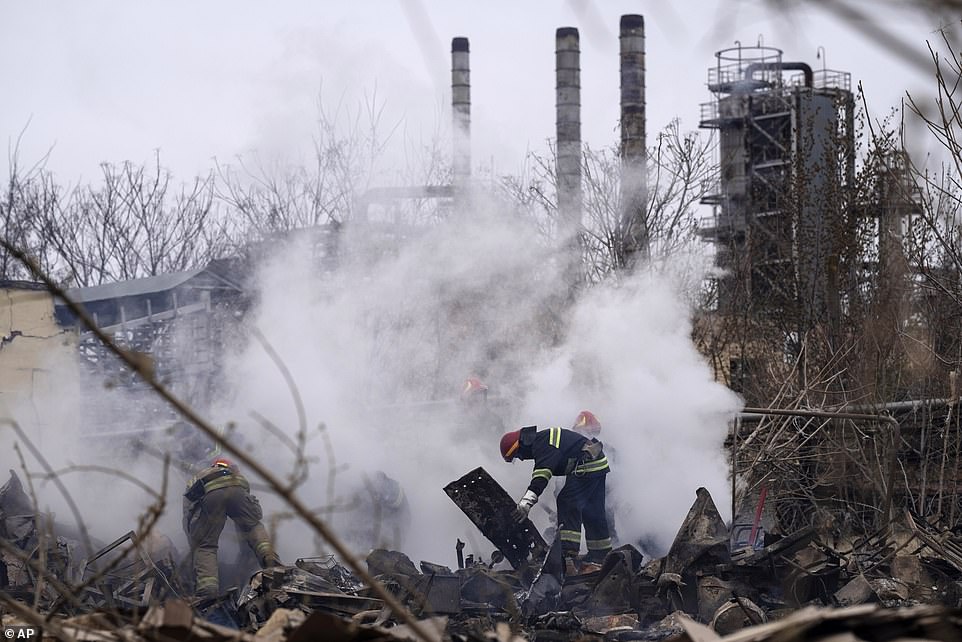 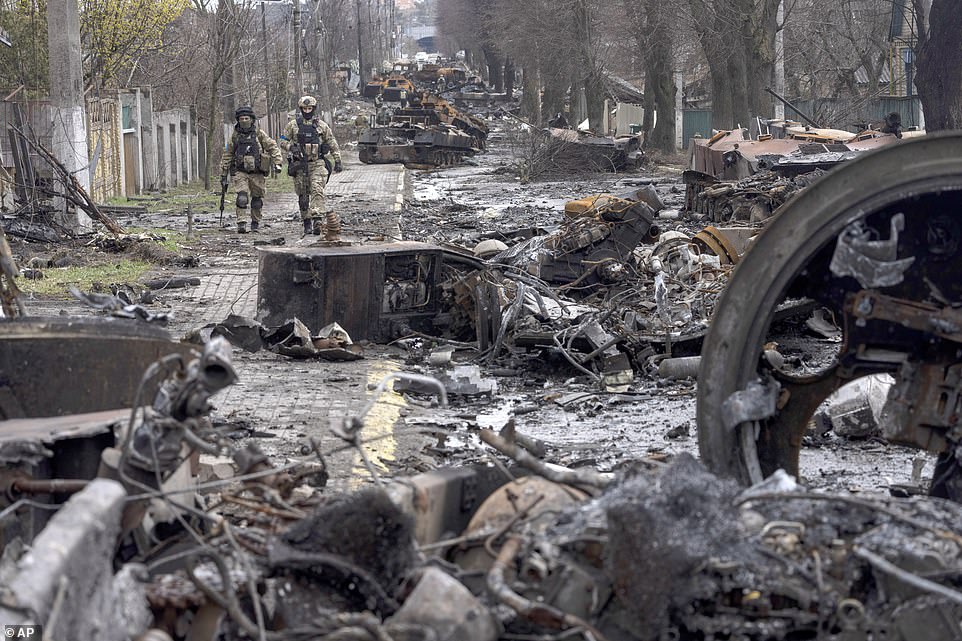 Soldiers walk amid destroyed Russian tanks in Bucha, in the outskirts of Kyiv, Ukraine, on Sunday

‘Russian forces are continuing to consolidate and reorganize as they refocus their offensive into the Donbas region in the east of Ukraine,’ Britain’s Ministry of Defence said in an intelligence briefing today.

It said Russian troops are being moved into the area, along with mercenaries from the Wagner private military group. Moscow says it is currently focusing its offensive on the Donbas, where Russian-backed separatists have been fighting Ukrainian forces for years.

Missiles also struck near the southern port of Odesa, with Russia saying it had destroyed an oil refinery used by the Ukrainian military. The Odesa city council said ‘critical infrastructure facilities’ were hit.

Serhiy Gaidai, the governor of eastern Luhansk region, said Russia was building up forces to break through Ukrainian defences.

‘I am urging residents to evacuate. The enemy will not stop, it will destroy everything in its path,’ he said in comments carried on Ukrainian television.

Overnight, the UK said Russia was still trying to take the southern port city of Mariupol, which has seen weeks of intense fighting.

‘Mariupol is almost certainly a key objective of the Russian invasion,’ the MoD said, ‘as it will secure a land corridor from Russia to the occupied territory of Crimea,’ in the south, which Moscow annexed in 2014.

Ukraine says it has evacuated thousands of civilians in recent days from the port city of Mariupol, which has been decimated from a siege and bombardment over a month, with only the skeletons of residential tower blocks remaining on some streets after the shelling.

Convoys of armoured vehicles belonging to pro-Russia forces have been seen near Mariupol. 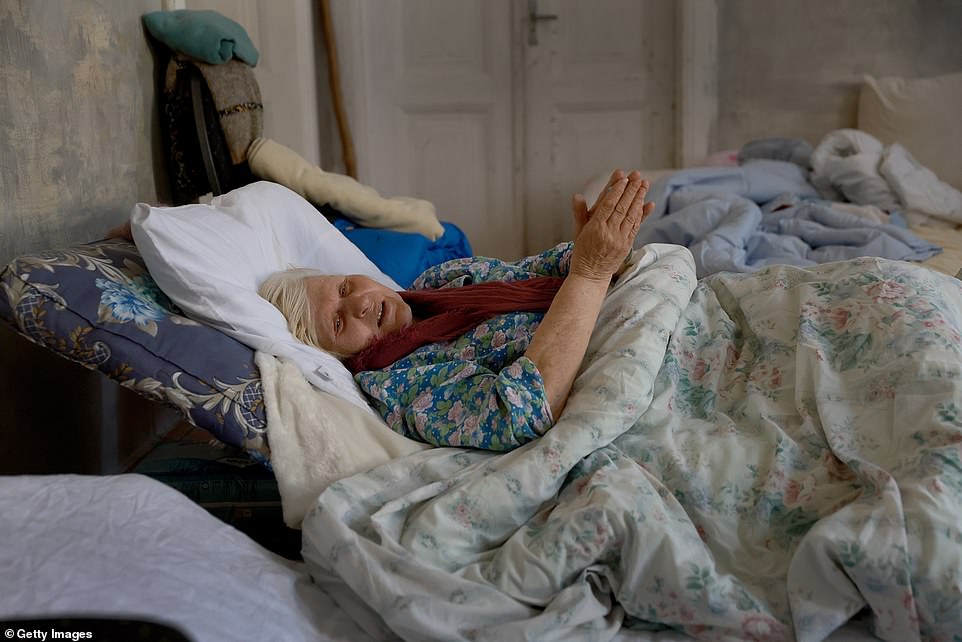 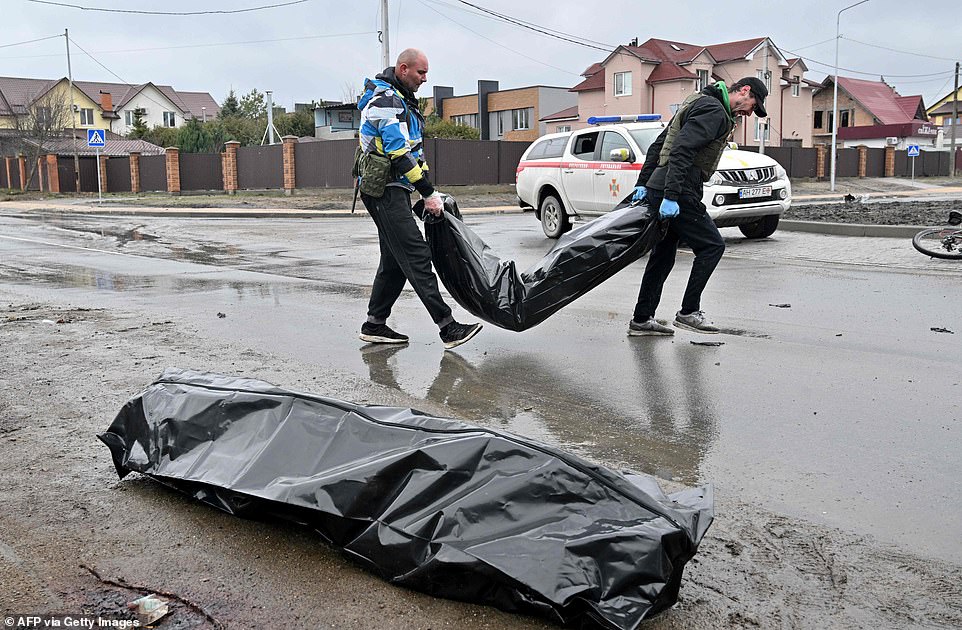 Communal workers carry body bags in the town of Bucha, not far from the Ukrainian capital of Kyiv on Sunday, after 410 civilian bodies were found there 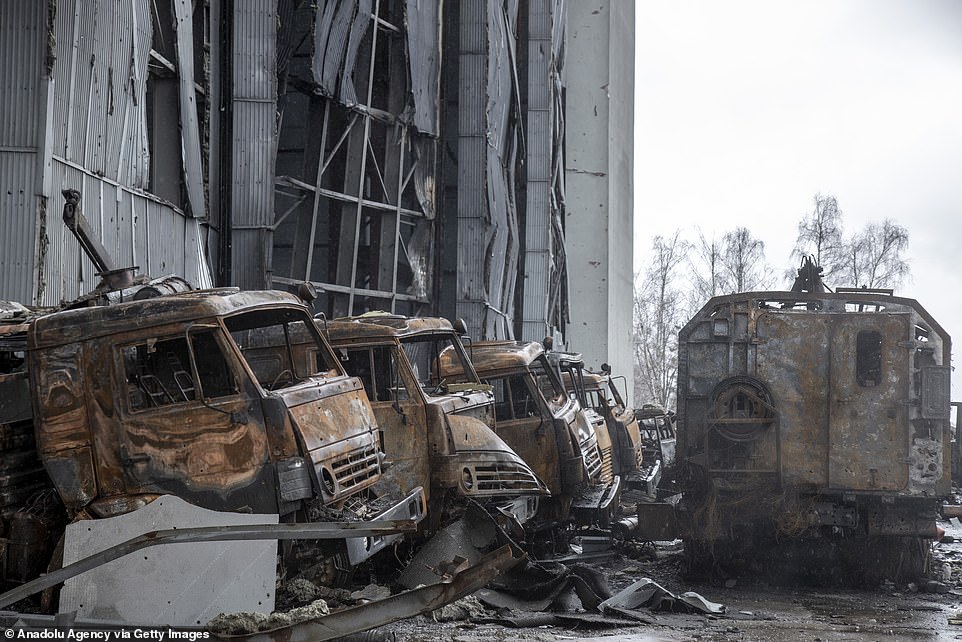 The wreckage of vehicles is seen at the military airport in the town of Hostomel, on the outskirts of Kyiv, after the Ukrainian army secured the area following the withdrawal of the Russian army from the Kyiv region on Sunday 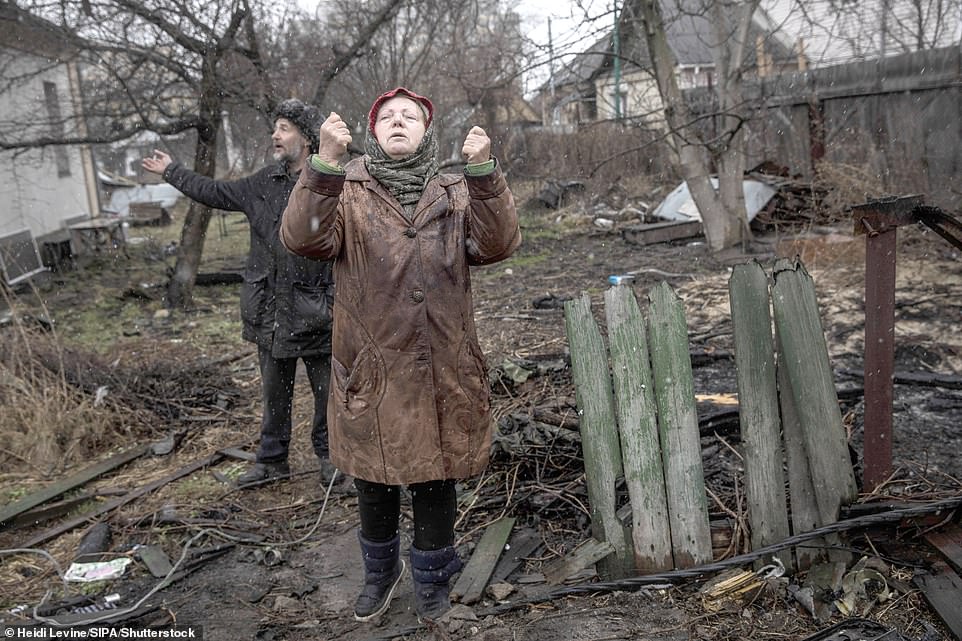 Larisa Savenko 72, stands outside her damaged home with Andriy Leshbon in war torn Bucha, Ukraine where destroyed Russian tanks, armored vehicles and other equipment litter the road on Sunday 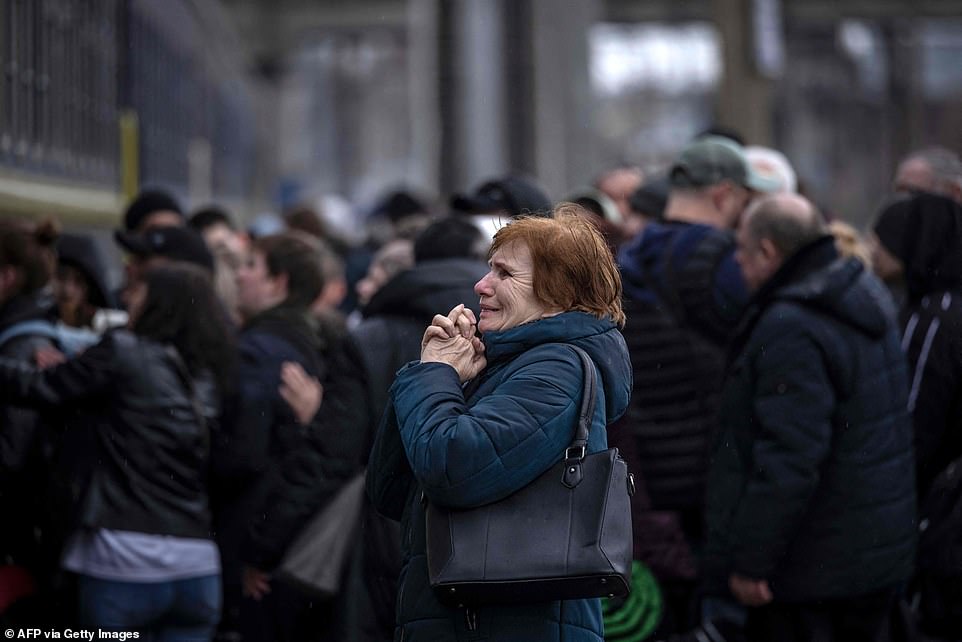 A woman is overcome with emotion as a train leaves the eastern Ukrainian city of Kramatorsk, in the Donbas region on Sunday 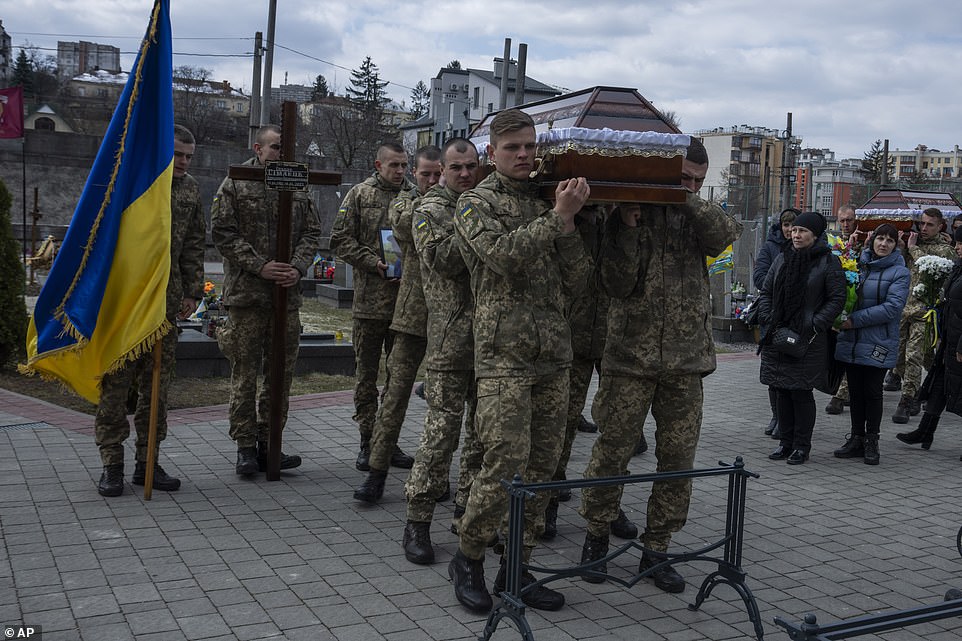 Soldiers carry the coffin of 41-year-old soldier Simakov Oleksandr, during his funeral ceremony, after he was killed in action, at the Lychakiv cemetery, in Lviv, western Ukraine on Monday

But a Red Cross team were not able to reach the besieged city on Monday to evacuate civilians, a spokesperson said, citing security conditions.

‘Due to security conditions, our team has not been able to reach Mariupol today,’ spokesperson Jason Straziuso said in emailed comments to Reuters.

Previous attempts by the Red Cross to reach the city over recent days and weeks have not succeeded. Russia has blamed the charity for the delays.

Battling Ukrainian forces have also retaken some towns in the Chernihiv region, with the road between the city of Chernihiv and the capital Kyiv said to be reopening to some traffic later today, news agency RBK Ukraina reported.

Chernihiv has been cut off from from shipments of food and other supplies for weeks. The mayor said Sunday that relentless Russian shelling had destroyed 70 per cent of the city.

Russian forces also no longer occupy any towns or villages in the Sumy region and had mostly withdrawn, while Ukrainian troops were working to push out the remaining units, the regional governor said today. The troops had occupied the area for nearly a month.

Speaking on national television, Governor Dmytro Zhyvytskyi said Russian troops had abandoned a lot of equipment in the region, which lies on Ukraine’s border with Belarus.

While Western officials initially said they believed Putin’s goal was to take Kyiv and potentially install a Kremlin-friendly government, Russian forces faced stiff resistance outside the capital and on other fronts, and have now retreated from some areas.

In some areas recently retaken from Russian troops, Ukrainian officials say they have recovered hundreds of slain civilians in the past few days.

Ukraine’s prosecutor-general says the bodies of 410 civilians, many with bound hands, close-range gunshot wounds and signs of torture, have been recovered from towns surrounding Kyiv.

In Bucha, northwest of Kyiv, Associated Press journalists saw 21 bodies. One group of nine, all in civilian clothes, were scattered around a site that residents said Russian troops used as a base. They appeared to have been shot at close range. At least two had their hands tied behind their backs.

In Motyzhyn, to the west of Kyiv, AP journalists saw the bodies of four people who appeared to have been shot at close range and thrown into a pit. Residents said the mayor, her son, and her husband – who had been bound and blindfolded – were among them. 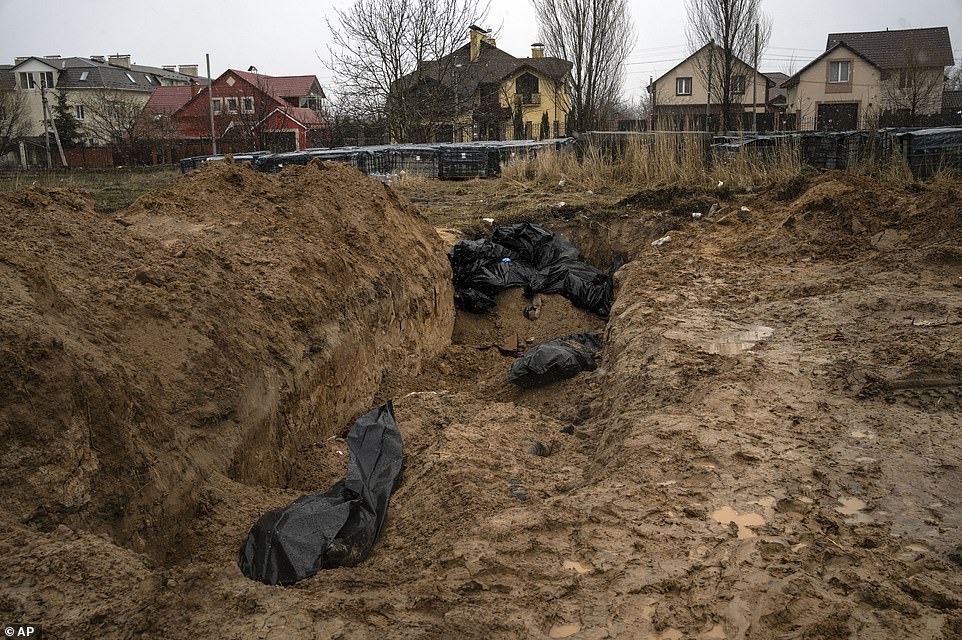 A view of the mass grave discovered close to a church in Bucha, which was uncovered by Ukrainian forces as Russian troops withdrew from the area around the capital 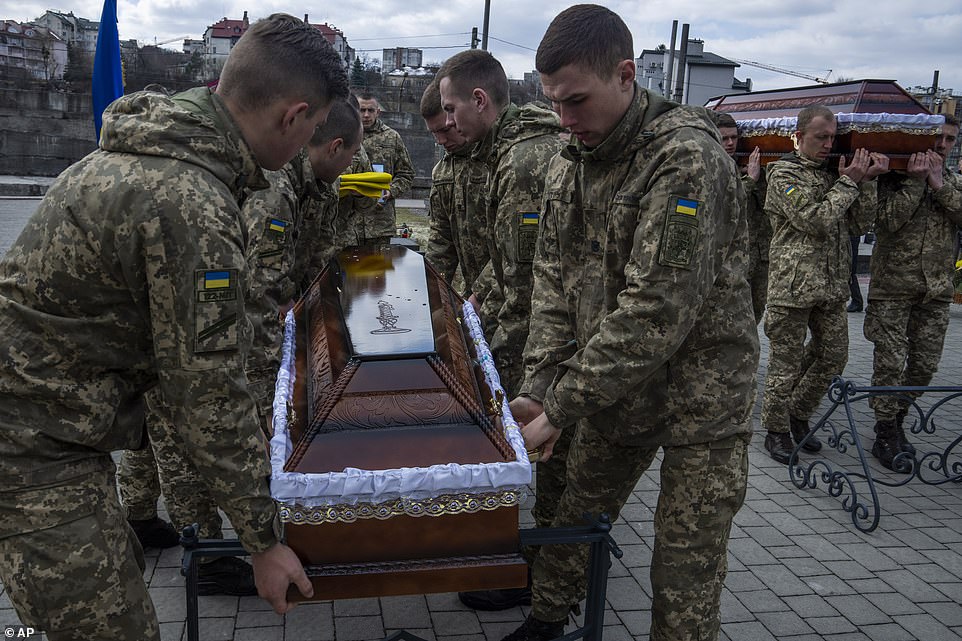 Soldiers prepare to place the Ukrainian flag on the coffin of 41-year-old soldier Simakov Oleksandr, during his funeral ceremony in Lviv on Monday 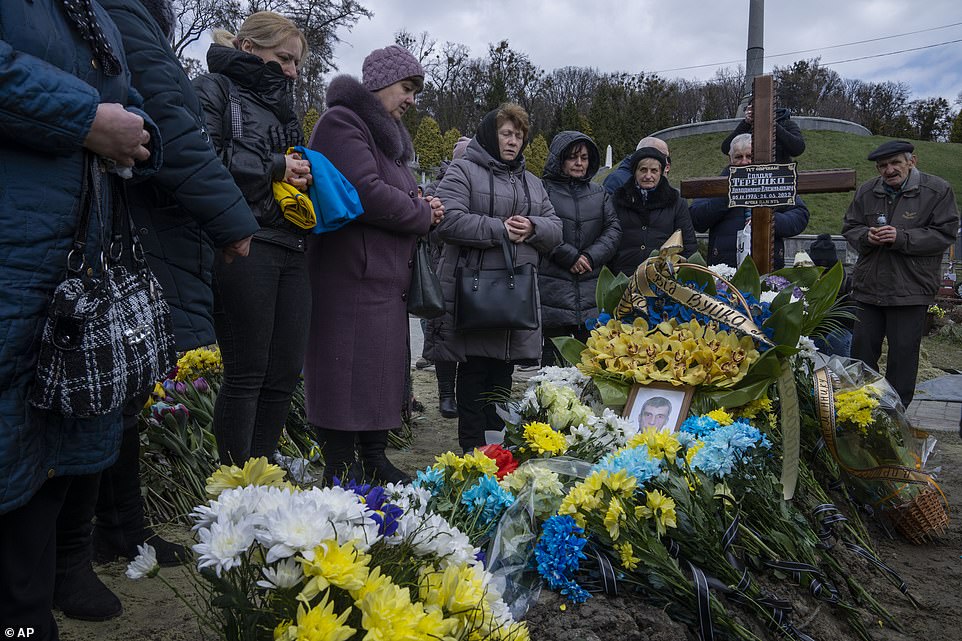 The family of 41-year-old soldier Simakov Oleksandr, pray in front of his grave, during his funeral ceremony, after he was killed in action, at the Lychakiv cemetery, in Lviv, on Monday 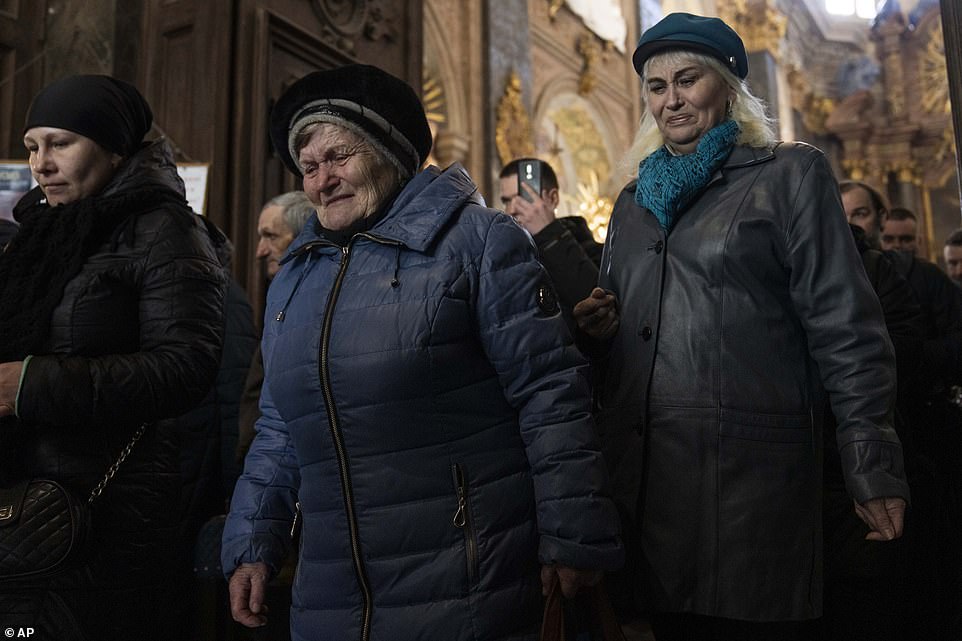 Women mourn during the funeral of 44-year-old soldier Tereshko Volodymyr, and 41-year-old soldier Simakov Oleksandr, who were killed in action, at the Holy Apostles Peter and Paul Church in Lviv on Monday 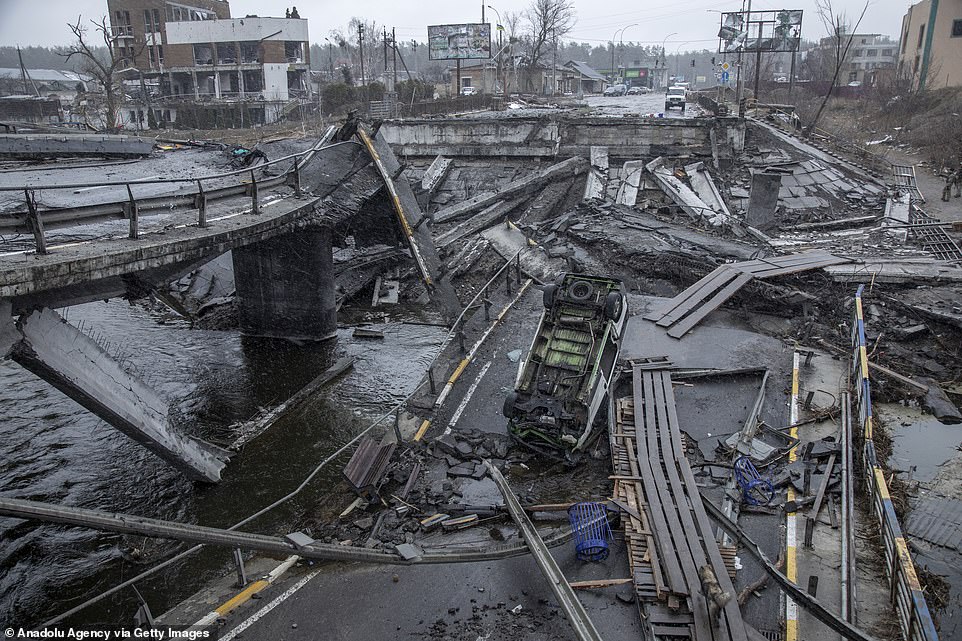 A collapsed bridge is seen in the town of Irpin, on the outskirts of Kyiv, after the Ukrainian army secured the area on Sunday 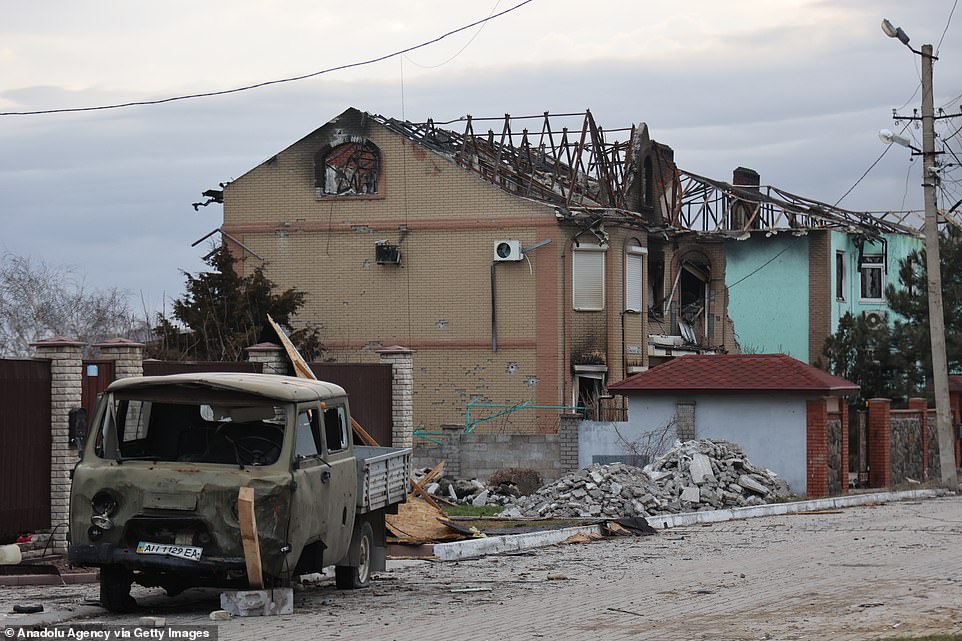 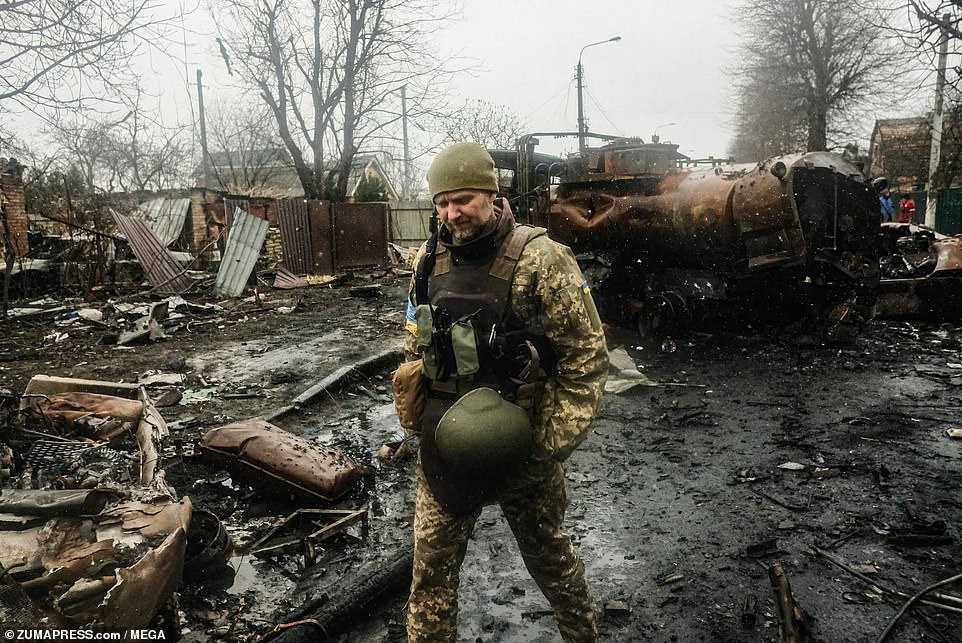 Ukrainian soldier inspects the wreckage of a destroyed Russian armored column on a road in Bucha, a suburb just north of the Capital, Kyiv, on Sunday

In a video address Sunday, Ukranian President Volodymyr Zelenskyy denounced the alleged targeted killings of civilians in towns that the Russians occupied, calling the killers ‘freaks who do not know how to do otherwise.’

He warns that more atrocities may be revealed if Russian forces are driven out of other occupied areas.

International leaders have condemned the reported attacks in the Kyiv-area towns after harrowing accounts from civilians and graphic images of bodies with hands tied behind their backs.

Russian Foreign Minister Sergey Lavrov rejected the allegations, describing the scenes outside Kyiv as a ‘stage-managed anti-Russian provocation.’ He said the mayor of Bucha made no mention of atrocities a day after Russian troops left last week, but two days later scores of bodies were photographed scattered in the streets.

He said Russia is pushing for an urgent meeting of the United Nations Security Council to discuss the matter, but the UK, which currently chairs the body, has refused to convene it. The United States and Britain have accused Russia in recent weeks of using Security Council meetings to spread disinformation.

European leaders, meanwhile, left no doubt about who they thought was behind the killings.

EU foreign policy chief Josep Borrell said ‘the Russian authorities are responsible for these atrocities, committed while they had effective control of the area.’

‘The perpetrators of war crimes and other serious violations as well as the responsible government officials and military leaders will be held accountable,’ he added.

French President Emmanuel Macron said Monday that there is ‘clear evidence of war crimes’ in Bucha that demand new measures. ‘I’m in favor of a new round of sanctions and in particular on coal and petrol. We need to act,’ he said on France-Inter radio.