‘It’s our beloved home… but we must flee’: Heartbreak of Ukrainian family who were forced to abandon Mykolaiv when Russian shelling reached their neighbourhood

She suffers constant nightmares that Russian troops are seizing her home city – but Katrin Kravtsov previously never thought she would see the day when she would leave her beloved Mykolaiv.

However, the 37-year-old mother-of-one decided that enough was enough when shelling hit her neighbourhood late on Tuesday.

Katrin and husband Alexey live in a modest one-bedroom flat in a Soviet-era apartment block.

The couple and their six-year-old son Maxim spent Tuesday night in their hallway by the door – ready to run for their lives in case of another attack.

It came as speculation mounts that Russia – as part of its masterplan to seize the Donbas region of eastern Ukraine – is plotting to take this port city on the Black Sea and force the region to hold a bogus breakaway referendum.

Such a move would create a massive land corridor under Kremlin rule. 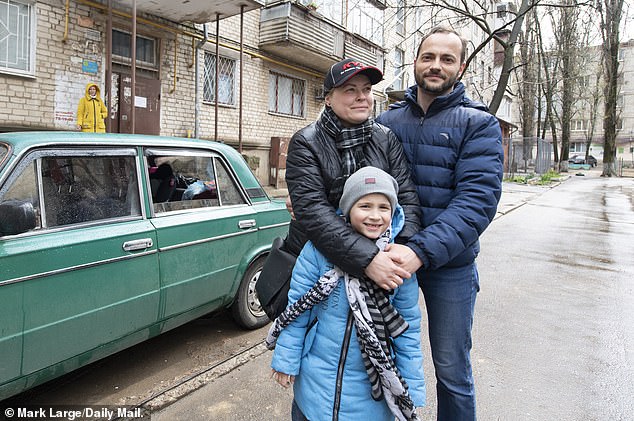 Alexey Kravtsov, 38, along with his wife Katrin, 37 and son Maxim, 6, prepare to leave their home in the residential Ingulskii district of Mykolaiv for the safety of Odessa

Mrs Kravtsov said: ‘I still cannot sleep because I see the Russians in my nightmares. I can hear the missiles, the explosions and see dead people with a lot of blood.’

She added that her son constantly imagines hearing shelling and air raid sirens, even in moments of silence.

She said: ‘We had plans here. School, work. University for Maxim.’

But the family have now packed their possessions into their car, including Maxim’s favourite puzzles and comic books.

As the war moves into a new stage, Russia has this week stepped up its bombardments across south-eastern Ukraine.

It claimed yesterday to have struck more than 1,000 military targets after hitting 1,200 the previous day.

Yet there is no evidence in Mykolaiv that Russian shelling has hit anything other than civilian areas.

Putin’s goal appears to be controlling as much of the Black Sea as possible and creating a land bridge to Crimea, which was illegally annexed in 2014.

Ukrainian troops – most barely in their early twenties and armed only with Kalashnikov rifles – man makeshift checkpoints on the outskirts of the city.

Signs line every road praising the fortitude of the Ukrainian military, which claimed yesterday that it has managed to repel Russia’s military onslaught in the Donbas.

The Mykolaiv checkpoints are made from sandbags, old tyres, and concrete slabs as the city braces itself for more attacks.

Mr Kravtsov, a car parts dealer, laughed at the idea that anyone here wants to be ruled from Moscow.

He said: ‘We had a good life here in Mykolaiv. Who or what is Putin liberating us from? He should concentrate on fixing his own country first.’ 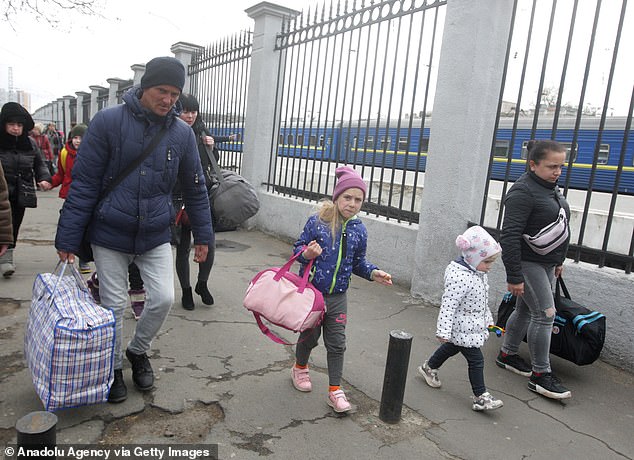 Refugees from Mykolaiv arrive during their evacuation at the railway station in Odessa on Wednesday. The city has been shelled by Russian forces

The attack close to the family’s flat ripped through a row of shops, spraying shrapnel everywhere. Miraculously, no one was killed.

‘I feared for my life,’ said Elena Serada, 36, who was at home with her two children at the time.

‘They were crying and screaming as we hid in the ground floor corridor.’

The shops are now a crumbling mess, and workers have already moved in to fill in a huge crater in the road.

Alexander Pavlenko, 63, came to recover a set of expensive lights from a beauty salon belonging to his two daughters which narrowly escaped being destroyed.

He said: ‘This is disgusting. Putin is a sick man. We don’t need him here…’

Yet there are those who still refuse to leave the city for the sake of their children in the hope that Putin will call off his assault soon.

Mother-of-four Natalia Fisienko, 40, comes down from her fourth-floor flat to collect rainwater with a bucket.

This is the only way she and her children can wash because the taps have been turned off for more than a week in Russian-occupied Kherson, which used to provide fresh water to the city. 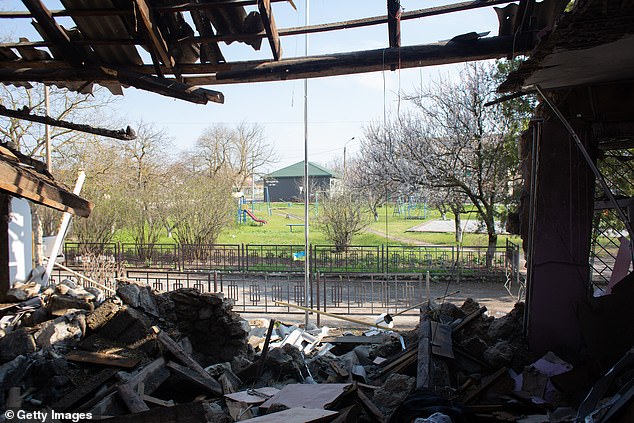 This village council building and police department in Lymany, just outside Mykolaiv, has been destroyed by Russian forces

She said: ‘They haven’t been able to take Mykolaiv. They are just trying to make the life of the people here as difficult as possible and leave us without water.’

Mrs Fisienko sent her two youngest children, Veronika, eight, and Egon, six, to live with her mother in a village south of Odessa after Tuesday’s attack.

She explained: ‘We were getting ready for bed when I felt my entire apartment shake. We decided to run down to the basement and spent the rest of the night there.’

Her eldest son, also Maxim, is already suffering from a high heart rate – one of the symptoms of post-traumatic stress disorder.

The 11-year-old sheds a tear when he tells me how he wants to go back to his ‘normal life’.

Gesturing to a playground opposite his apartment block, he said: ‘I used to like playing football here, but now all the other children have gone.’

A neighbour points to another hole in the ground where a suspected cluster bomb landed, close to where children would play together each evening.

He shouted: ‘If there is anything that is good to come out of this war, it means that we will never be close with Russia again!’

Hours later, as darkness fell on the city, the sky lit up once more with shelling.

But Natalia Fisienko remained defiant. She wrote in a text message late last night: ‘I am not leaving my home town… Let the invaders leave Ukraine instead.’

Readers of Mail Newspapers and MailOnline have always shown immense generosity at times of crisis.

Calling upon that human spirit, we are supporting a huge push to raise money for refugees from Ukraine.

For, surely, no one can fail to be moved by the heartbreaking images and stories of families – mostly women, children, the infirm and elderly – fleeing from Russia’s invading armed forces.

As this tally of misery increases over the coming days and months, these innocent victims of a tyrant will require accommodation, schools and medical support.

Donations to the Mail Force Ukraine Appeal will be used to help charities and aid organisations providing such essential services.

In the name of charity and compassion, we urge all our readers to give swiftly and generously.

TO MAKE A DONATION ONLINE

To add Gift Aid to a donation – even one already made – complete an online form found here: mymail.co.uk/ukraine

Via bank transfer, please use these details:

TO MAKE A DONATION VIA CHEQUE

TO MAKE A DONATION FROM THE US

US readers can donate to the appeal via a bank transfer to Associated Newspapers or by sending checks to dailymail.com HQ at 51 Astor Place (9th floor), New York, NY 10003