Rusty North Sea oil rig arrives off British coast to be transformed into a key exhibit in £120million ‘Festival of Brexit’ with a waterfall, amphitheatre and broadcast studio

A rusty North Sea oil rig will join the £120million former ‘Festival of Brexit’ after it today landed off the British coast ready to be transformed into the latest ‘art’ exhibit.

The ‘See Monster’ is one of ten key exhibits for ‘Unboxed: Creativity in the UK’ – which ‘airbrushed’ Brexit from the project last year – which includes the ‘Dreamachine’, which is like described as a giant kaleidoscope you experience with your eyes shut.

The decommissioned 450-tonne rig will be transformed to ‘inspire conversation about the repurposing of large industrial structures and design-led solutions to sustainable futures’, according to organisers.

It was transported by sea on a flatbed barge as big as a football pitch as it landed at Weston-super-Mare in Somerset this morning, July 13. 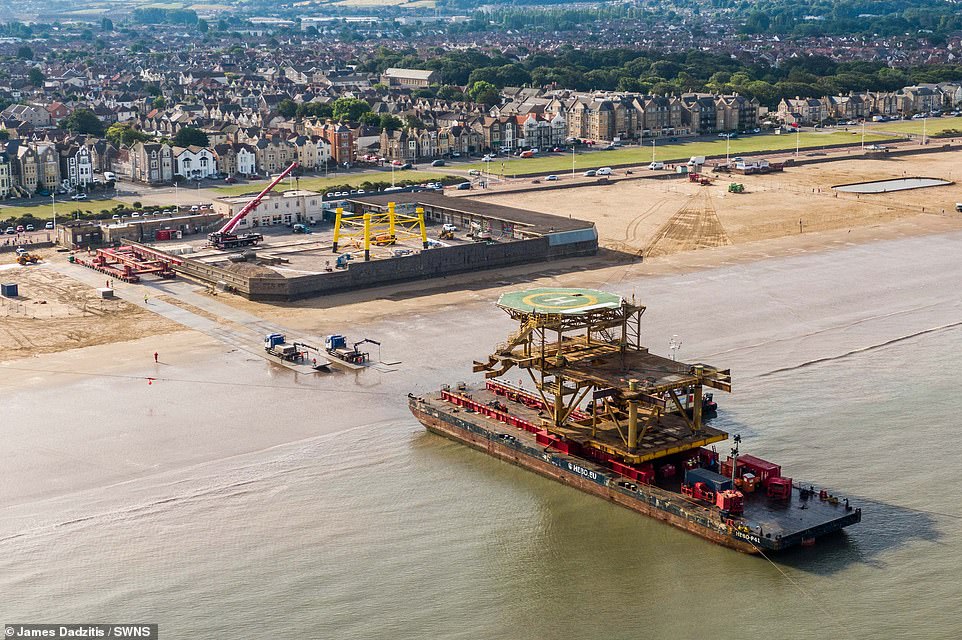 The ‘See Monster’ arrived in Weston-Super-Mare this morning on a flatbed barge as big as a football pitch today, July 13. It is a rusty disused North Sea Oil rig that will be made into an art exhibit for ‘Unboxed’ once dubbed the ‘Festival of Brexit’ 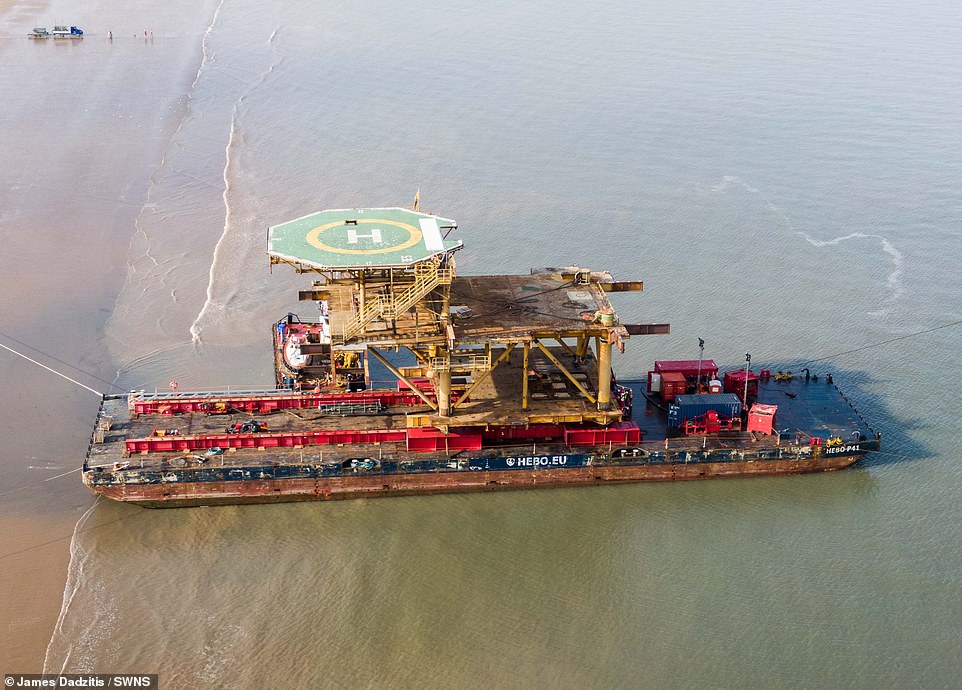 The oil platform will then be taken to its new home of the Tropicana – the former 1930s lido where Banksy’s Dismaland was based – and its transformation will begin.

Newsubstance, one of the groups behind the installation, said the world-first project was an ambitious feat of design. 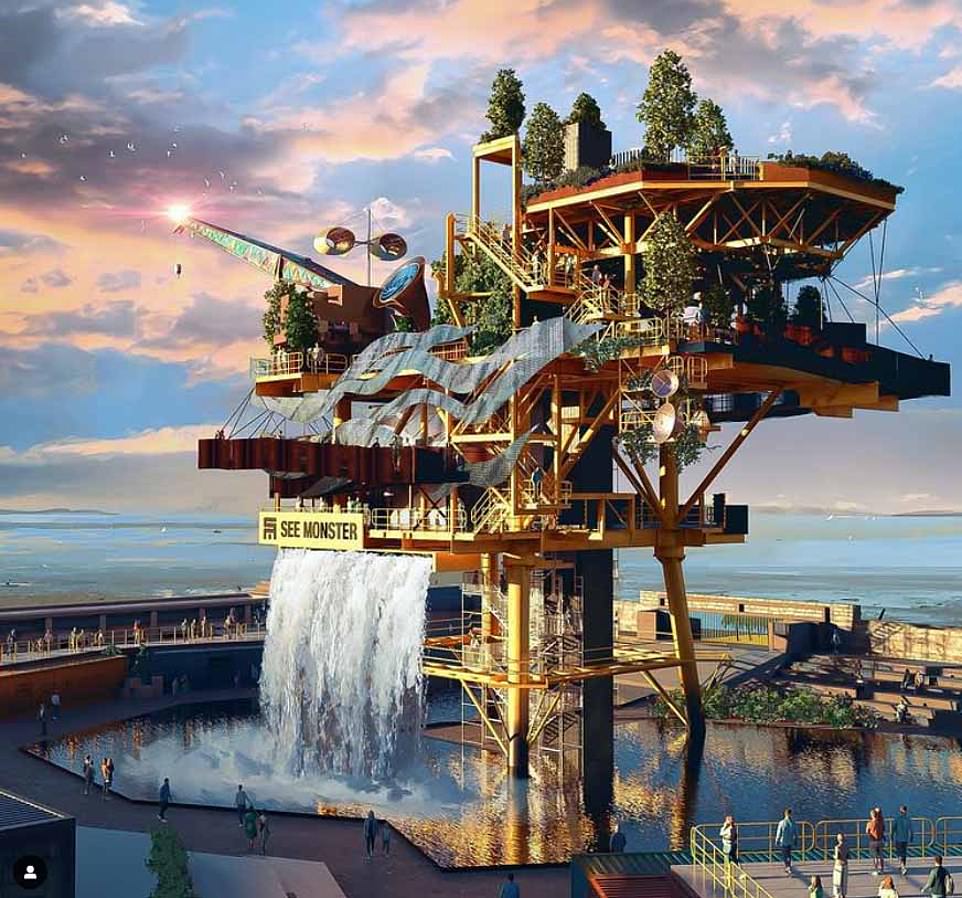 An artist’s impression of what the 35m ‘See Monster’ will look like once work has completed. It will open to the public on the August Bank Holiday weekend and will feature a 12m waterfall 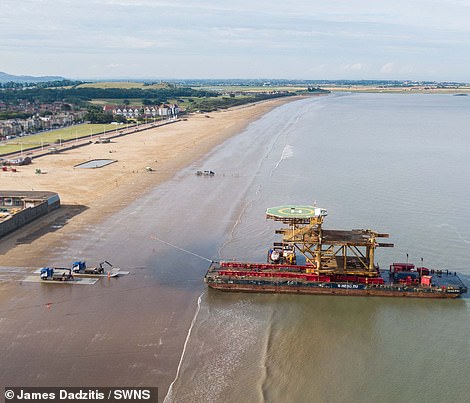 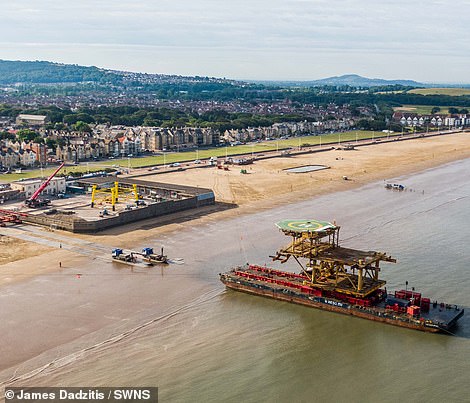 The ‘See Monster’ is one of the projects in ‘Unboxed: Creativity in the UK’ which was originally dubbed the ‘Festival of Brexit’ by cabinet minister Jacob Rees-Mogg

The entire construction will be 35m tall – 15m taller than the Angel of the North and just 11m shy of Nelson’s Column.

It is scheduled to open to the public on the August Bank Holiday weekend.

‘There will be an impressive calendar of events and activities planned across the town to celebrate its time here and we look forward to welcoming visitors from across the country to share in this unique event.’

The project was originally launched by Theresa May in 2018 and was dubbed the ‘Festival of Brexit’ by current Minister of State for Brexit Opportunities Jacob Rees-Mogg. 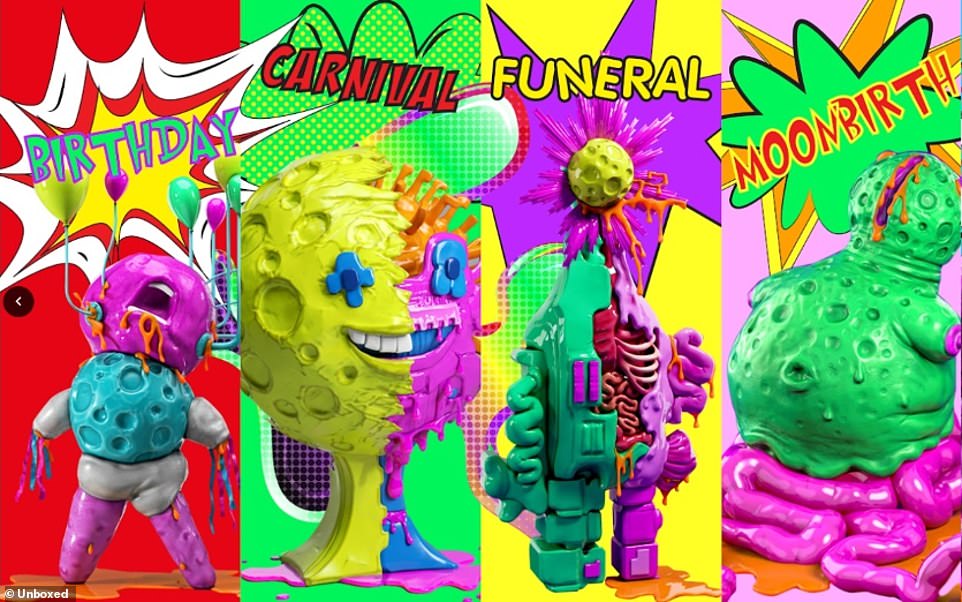 The ‘Tour de Moon’ event, described as a ‘cosmic journey into the possibilities of tomorrow: live shows, nightlife, digital experiences and more created in collaboration with the Moon’ 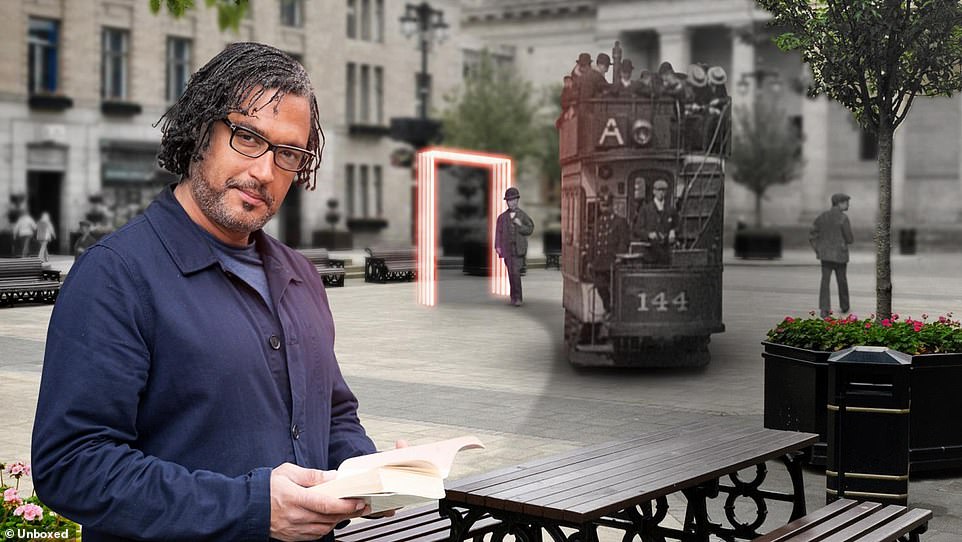 ‘Storytrails’, consisting of AR and VR shows hosted at local libraries, which are described as a ‘deep dive into our collective history’. Pictured: David Olusoga, a British-Nigerian historian, broadcaster and filmmaker whose BBC TV series include Black and British and British: A Forgotten History and Statue Wars: One Summer in Bristol, a documentary on the story behind the protests that led to the statue of slave trader Edward Colston’s being thrown in Bristol Harbour

‘Unboxed: Creativity in the UK’, originally dubbed the ‘Festival of Brexit’, has cost British taxpayers £120m and runs from March to October this year.

Across 2022 it will feature 10 ‘awe-inspiring new ideas’ across, science technology, maths and the arts.

‘Unboxed: Creativity in the UK’ is described as a ‘nationwide festival in celebration of the creativity and innovation of the United Kingdom’.

The project was originally launched by Theresa May in 2018 and was dubbed the ‘Festival of Brexit’ by current Minister of State for Brexit Opportunities Jacob Rees-Mogg.

The £120million government-funded ceremony was originally coined as a way of championing Britain’s decision to leave the European Union.

It was then internally given the working title ‘Festival UK 2022’ as organisers distanced the project from the referendum – until chief creative director Martin Green revealed the name ‘Unboxed’.

The project was blasted by MPs in March – a week after its launch in Scotland – as an ‘irresponsible use of public money’ that was ‘lacking vision’.

‘Unboxed’ was described as a ‘prime illustration of an event with aims that have been vague from the start,’ by the Department for Digital, Culture, Media and Sport (DCMS) Committee.

The MPs wrote: ‘The desire for it to seemingly cater to everyone, everywhere, is a recipe for failure and investing £120m in something when the Government, by their own admission, “did not know what it was” is an irresponsible use of public money.’

DCMS Committee Chair, Julian Knight, said: ‘The Unboxed festival acts as a prime illustration of an event with aims that have been vague from the start.

‘That it took three years to come up with a rather nebulous name, which will mean little to the few that are even aware of its existence, does not bode well for its chances of delivering a true lasting legacy.’

Speaking last October, Culture Secretary Nadine Dorries said: ‘Next year we will celebrate creativity in all four corners of the UK in what is set to be a huge year for the nation.

‘Everyone should have the opportunity to experience world-leading arts and culture no matter what their background or where they’re from – and that’s what Unboxed is all about.

‘In 2022 we’re also preparing to host the Commonwealth Games in Birmingham and mark Her Majesty The Queen’s Platinum Jubilee. Together, these events will be at the heart of a year of celebration that will showcase the best of the UK to the world.’

A DCMS spokesperson said they disagree with the committee’s findings in March this year.

They said: ‘The UK has a strong history of hosting incredible international events that deliver huge benefits for the nation, creating jobs and increasing investment in towns and cities across the country.

‘2022 will be no different with Her Majesty The Queen’s Platinum Jubilee, the Birmingham Commonwealth Games, the Women’s Euros, the Rugby League World Cup and UNBOXED bringing people together and leaving a strong legacy that will benefit communities for years to come.’

The ‘Unboxed’ project began in March and will end in October this year.