Moscow: The Kremlin said on Tuesday that it did not rule out sabotage as a reason behind damage to the Russia-built network of Nord Stream pipelines which sprung unexplained leaks in the Baltic Sea.

The pipelines, designed to bring gas from Western Siberia’s Yamal Peninsula directly to Germany – Europe’s biggest economy – have been the focus of an energy war between Russia and its traditional European clients over the conflict in Ukraine. 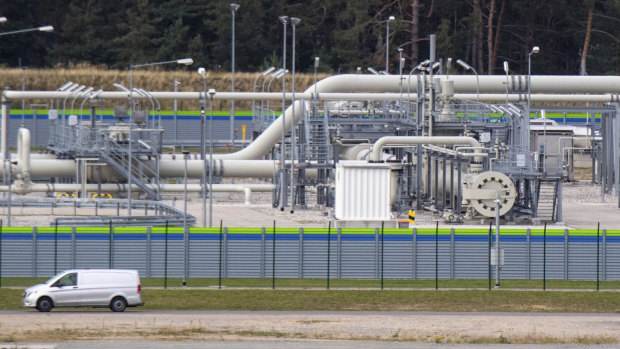 Pipe systems and shut-off devices are seen at the gas receiving station of the Nord Stream 2 Baltic Sea pipeline in Lubmin, Germny.Credit:dpa via AP

Nord Stream AG, the operator of the network, said earlier on Tuesday that three offshore lines of the Nord Stream gas pipeline system sustained “unprecedented” damage in one day.

Asked if sabotage was the reason for the damage, Kremlin spokesman Dmitry Peskov told reporters: “No option can be ruled out right now.”

The Kremlin, Peskov said, was very concerned by the situation, which required prompt investigation as it was an issue affecting the energy security of the “entire continent”.

“This is a very concerning news. Indeed, we are talking about some damage of an unclear nature to the pipeline in Denmark’s economic zone,” Peskov said. “This is an issue related to the energy security of the entire continent.” 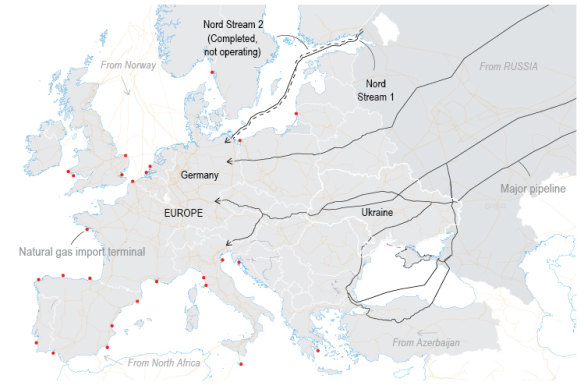 How Europe gets its pipeline gas.Credit:AP

The Nord Stream 1 and Nord Stream 2 pipelines have a joint annual capacity of 110 billion cubic metres – more than half of Russia’s normal gas exports volumes.

Sweden’s Maritime Authority issued a warning about two leaks in the Nord Stream 1 pipeline, shortly after a leak on the nearby Nord Stream 2 pipeline was discovered that had prompted Denmark to restrict shipping in a five nautical mile radius.

Nord Stream AG said it was impossible to estimate when the gas network system’s working capability would be restored.

Each line of the pipeline consists of about 100,000 24-tonne concrete-weight coated steel pipes laid on the seabed of the Baltic Sea. The pipelines have a constant internal diameter of 1.153 metres, according to Nord Stream.

Sections of the pipelines lie at a depth of around 80-110 metres.

The 1224 km-long Nord Stream 1 consists of two parallel pipelines with nameplate annual capacity of 27.5 billion cubic metres (bcm) each, running from Vyborg, Russia to the exit point in Lubmin, Germany. It started supplying Germany in 2011.

Flows via the pipeline, which had been working at only 20 per cent of its capacity since July, were halted at the end of August and were not restarted following maintenance.

Nord Stream 2, which runs almost in parallel to Nord Stream 1, was built in September 2021 but was never launched as Germany refused to certify it. The project was halted altogether just days before Moscow sent its troops into Ukraine on February 24.