The ‘Stop Boris’ Tory leadership ‘dream ticket’? Sajid Javid’s team are trying to convince Michael Gove to stand aside and accept being Chancellor to install ‘The Saj’ in No 10 to sabotage Johnson

As Tory leadership jockeying gathers pace, MailOnline understands allies of Sajid Javid are contemplating a ‘dream ticket’ with Michael Gove that could see the pair move into No10 and No11 respectively.

They are mulling whether Jeremy Hunt could be offered Home Secretary to drop his candidacy as part of the pact, while Penny Mordaunt and Andrea Leadsom could also be handed promotions to fall into line.

There are fears that unless the main Cabinet contenders come to an arrangement between themselves their support could splinter, opening the door for Boris Johnson.

Many believe that if he gets enough endorsements from MPs to be in the final two voted on by Tory activists he will win, but his support on the backbenches is limited.

A senior Tory source described Javid as PM and Gove as Chancellor as a ‘grown up and sensible solution’ that would match the current Environment Secretary’s strategic thinking with the Home Secretary’s public appeal and bring ‘stability’ at the top of the party.

‘We know Michael Gove’s limitations in terms of public appeal, Lynton Crosby made that very clear in 2014. He has some clear challenges to get over the line without many of the Brexit supporters who will never forgive what happened with Boris Johnson in 2016.

‘Sajid Javid has broad support around the country, the polling evidence proves that.  And the fact that he has a back story that no one else in the party has.’

More than a dozen Tory MPs are poised to launch bids for the leadership after Theresa May announced she will quit if her Brexit deal is voted through.

Another MP said today: ‘It’s like the start line of the Grand National, but in the end Becher’s Brook finds many out.’ 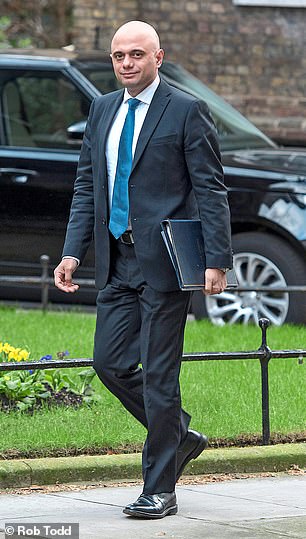 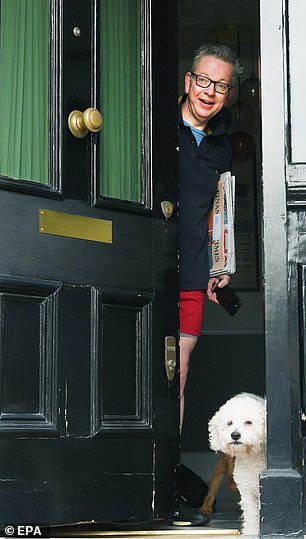 Sajid Javid (left) in Downing Street yesterday. Rmours are growing of a joint ticket that would see him enter Number 10 with Michael Gove (right, today) as Chancellor 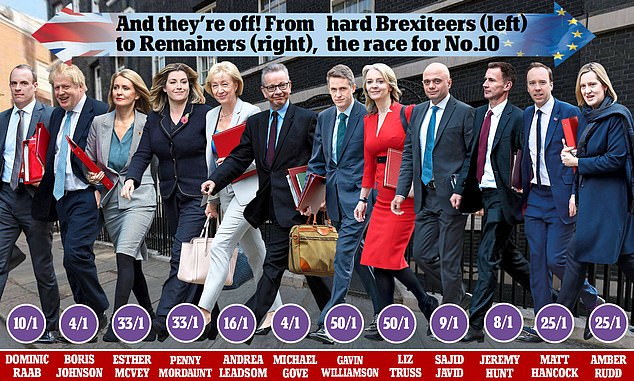 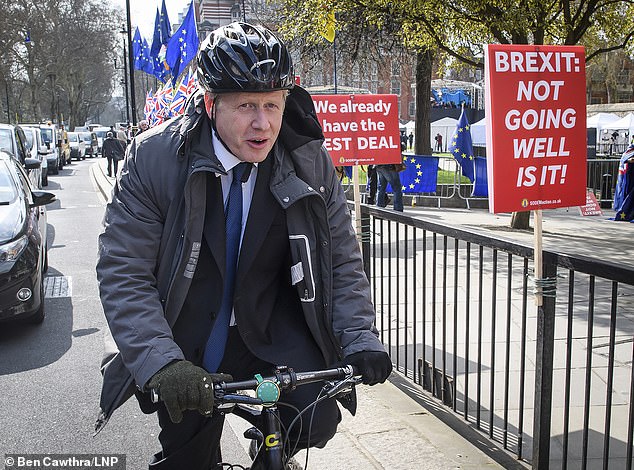 Boris Johnson remains popular with Tory grassroots who choose the party leader in a final head-to-head vote. But he faces a battle getting through the opening rounds of a leadership contest, which are determined by votes from less enamored MPs

As many as eight Cabinet ministers are expected to put their names forward, with Hunt, Gove and Javid among the frontrunners.

Health Secretary Matt Hancock is seen as a strong outside bet, along with Chief Secretary to the Treasury Liz Truss and Defence Secretary Gavin Williamson.

Work and Pensions Secretary Amber Rudd is weighing up whether to run.

Among the Cabinet outsiders are Leader of the Commons Andrea Leadsom, who finished second in the 2016 leadership contest that Mrs May won, but is expected to have another tilt, along with Brexiteer International Development Secretary Penny Mordaunt.

Ms Truss set out a possible leadership pitch this morning, telling business leaders she wanted a Canada-style trade deal with the EU after Brexit.

Urging Tory and DUP MPs to back Theresa May’s Withdrawal Agreement she told the British Chambers of Commerce conference there was a ‘dawning realisation that the deal the Prime Minister has set out is the deal that will allow us to move forward as a country’.

She told the London event: ‘What I want to do today is strongly encourage colleagues of mine from the Conservative Party and other parties to back the Prime Minister’s deal so we can get on with the next stage of negotiations which is the really important part of us being able to secure a good trade deal with the EU.’

She added: ‘I’m a free trader, I believe that we need to open our economy to the rest of the world, I would like to see us do a Canada-style free trade deal once we have left the EU.’

Outside the Cabinet, the leading contenders are former Foreign Secretary Boris Johnson and former Brexit Secretary Dominic Raab, both of whom quit Government posts over Mrs May’s Brexit plans and will be vying for votes among Eurosceptic MPs.

Last night one MP said: ‘It’s going to be like Ben Hur – there’ll be a cast of thousands.’ 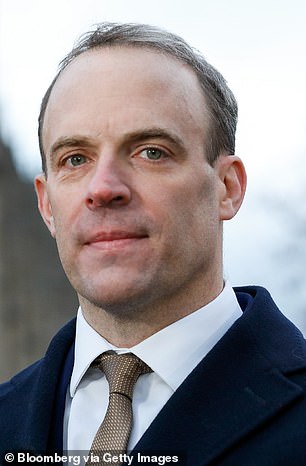 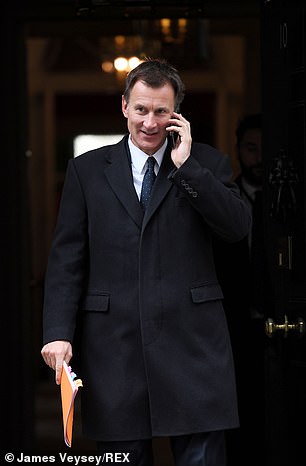 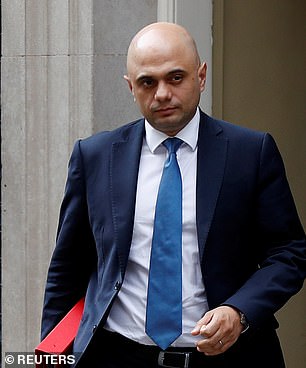 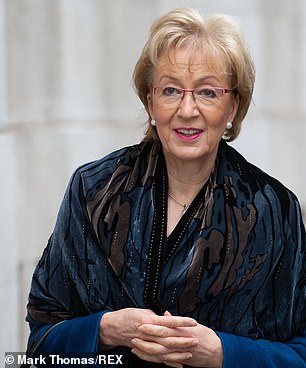 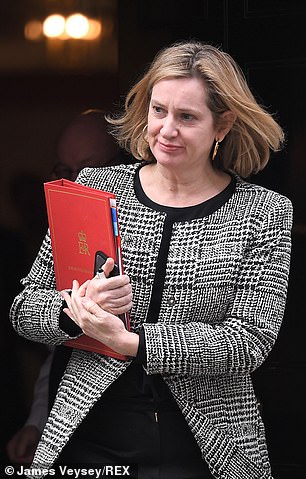 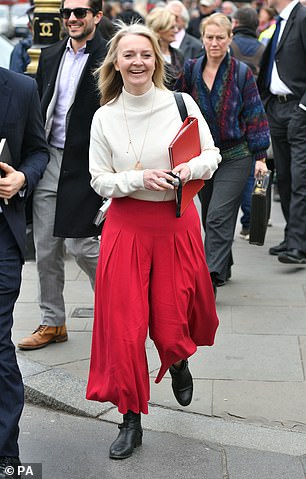 Amber Rudd, the work and pensions secretary, and ardent Remainer, and Chief Secretary to the treasury Liz Truss might also fancy a run at the leadership

How successor will be chosen

Last night, bookmakers Ladbrokes installed Mr Gove and Mr Johnson as early joint favourites at 4/1 and Mr Hunt at 8/1, with Mr Raab and Mr Javid at 10/1. Not all the likely runners are serious about winning the top job, but hope to secure a better job in Cabinet by increasing their profile.

Several of the leading candidates have had ‘shadow’ campaign operations running for months in anticipation of Mrs May going, with supporters discreetly sounding out MPs.

The first phase of the contest will see all Tory MPs vote in a series of rounds to whittle down the candidates to the final two. Party members across the country then vote in a postal ballot to decide the winner.

Last night, No 10 officials said that if Mrs May’s deal goes through in the coming days and the UK leaves the EU on May 22, she will resign as Tory leader but stay on as caretaker until the contest is finished. She would go to Japan for the G20 at the end of June, meaning the contest would last about six weeks.

Mr Hunt has long been seen as a frontrunner because of his seniority and experience, but could suffer from the ‘favourite’ tag. His opponents have labelled him ‘Continuity May’.

Mr Javid’s hopes have taken a series of blows in recent months over his handling of the case of teenager Shamima Begum who ran off from her home in east London to join Isis, and for his claim to be taking control of a migration crisis while on holiday in South Africa.

Allies of Mr Johnson believe if he gets to the final round he is likely to win because of his huge popularity among grassroots Tories.

There is also speculation about Mr Johnson and Miss Rudd forming a powerful joint ticket, which would bring together a leading Brexiteer and a leading Remainer and could help reunite the party.

Mr Gove’s prospects have sky-rocketed in recent weeks after several barnstorming performances at the despatch box, including his closing speech in the no confidence debate in January when he savaged Labour leader Jeremy Corbyn.

And they’re off! From hard Brexiteers to Remainers, the race for No.10

Background: Son of a Czech-born Jewish refugee who fled the Nazis in 1938 and died of cancer when Raab was 12.

EXPERIENCE: Lasted only four months as Brexit Secretary. Voted against May in leadership confidence vote.

WEAKNESS: Seen as too clever by half and lacking people skills.

Age: 54. Former Foreign Secretary. His support for Brexit was vital to Leave’s win.

Background: Known for being identified by just one name, Boris, for his show-off Classics references and for chaotic private life.

VERDICT: Party grassroots love him and he’s top of the ConservativeHome league table by 12 points.

EXPERIENCE: Cabinet minister for only 18 months. Seen as a ‘coming man’.

STRENGTH: One of life’s Tiggers with ambition and enthusiasm to match his brainpower.

WEAKNESS: Never knowingly modest, he once foolishly likened himself to Churchill, Pitt and Disraeli.

Background: Daughter of a Labour-supporting stockbroker and Tory-leaning JP.

EXPERIENCE: Became Home Secretary after just six years as an MP. Resigned over the Windrush scandal after inadvertently misleading MPs.

STRENGTH: Tough operator who was restored to Cabinet within six months.

WEAKNESS: Holds seat with majority of only 346. Headmisstressy manner but an accomplished performer.

Background: Spent the first two years of her life in foster care. Was a breakfast TV presenter before becoming a Tory MP on Merseyside.

EXPERIENCE: As welfare minister was viciously targeted by Labour.

STRENGTH: Tough and telegenic. Won plaudits with members for resigning from Cabinet over Brexit deal.

WEAKNESS: Some say she doesn’t have the intellectual fire power for top job.

Background: Her mother died when she was a teenager. Cared for younger brother. EXPERIENCE: Was a magician’s assistant. Appeared in the reality TV show Splash!

STRENGTH: Only female MP to be a Royal Naval Reservist. Attended Lady Thatcher’s funeral in uniform.

WEAKNESS: Inexperienced, having been in Cabinet for less than two years. Has never run a major Whitehall department.

VERDICT: Edged up to 11th in ConservativeHome league table.

EXPERIENCE: Struggled in her first Cabinet post, as Environment Secretary.

STRENGTH: Blossomed as Leader of the Commons, winning plaudits for taking on Speaker John Bercow.

WEAKNESS: Stood for leader in 2016 but made ill-considered comment comparing her experience as a mother to the childless Mrs May.

VERDICT: Has soared to the top of the ConservativeHome table of competent ministers.

WEAKNESS: Still suspected of having a disloyal gene after knifing Boris Johnson in last leadership contest.

VERDICT: Popular with the Tory members, who, crucially, will vote for the new leader.

Background: From a Labour-supporting, working class family. Ran a pottery firm before becoming an MP.

Background: Raised by Left-wing parents and as a child was marched through the streets on anti-Thatcher protest shouting: ‘Maggie out!’

EXPERIENCE: Joint-author in 2012 of a controversial booklet, Britannia Unchained, which alleged ‘the British are among the worst idlers in the world’.

Age: 49. Home Secretary. Remainer who changed to Brexit after the referendum.

Background: Son of a bus driver who came to Britain from Pakistan with £1 in his pocket. Was head of credit trading at Deutsche Bank.

STRENGTH: An extraordinary rags-to-riches back story that we will hear more of during the leadership campaign.

WEAKNESS: Widely seen as a wooden and a poor speaker.

Before politics, set up an educational publisher which was sold for £30million in 2017.

STRENGTH: Among the most experienced ministers in the field who, unusually, has made few political enemies.

WEAKNESS: Some, though, regard him as a ‘bit of a drip’.

Verdict: Seen by many as man who could best unite party on Brexit.