Establishment all-boys school Scotch College has again looked north to Sydney to select a new principal, but not before conducting a “forensic investigation” into his background after its earlier choice for the role put the school into damage control.

Scotch has appointed Dr Scott Marsh, the headmaster of an Anglican co-ed school on Sydney’s fringe, six months after sacking its first choice for the role before he had even started. 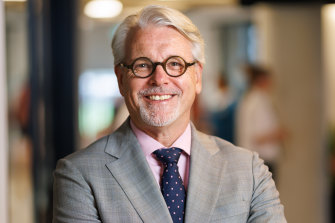 Dr Scott Marsh has been announced as Scotch College’s 10th principal, beginning in 2023.

Marsh is headmaster of William Clarke College, a mid-fee private school in north-western Sydney, and has held senior roles at some of Sydney’s most expensive private schools, including The King’s School, Parramatta and SCEGGS Redlands.

Scotch College chairman Alex Sloan said Marsh had beaten a field of candidates from countries including Britain, the US, Canada and New Zealand, and had “an outstanding 30-year history of passionate commitment to education”.

Marsh also satisfied a “forensic investigation” into his background, conducted by a third party, that was not done on the school’s first choice in the role, Sloan said.

The 171-year-old college announced Matthew Leeds as its 10th principal in November last year but sacked him in January after a whistleblower revealed a complaint was made against him in 2017 alleging misconduct when he worked at Geelong Grammar.

Leeds went on to work at Shore School in Sydney, which has defended him, noting that two separate investigations by Geelong Grammar and the Victorian Institute of Teaching did not substantiate the claims made against him.

Sloan has faced calls to resign as chair of the college board, with a number of disgruntled Scotch alumni alleging the botched initial appointment damaged the school’s standing.

Peter Yunghanns, a retired corporate raider and polo benefactor, wrote to the council in late January calling on Sloan and other council members involved in Leeds’ hiring to resign.

But Sloan dismissed those calls as “one or two very noisy individuals”.

“The vast majority of the Scotch community moved on and supported the council,” he said.

He said it was in the school’s best interests for him to remain as council chair while it searched for a new principal.

The school’s current principal, Tom Batty, will finish up next week after 14 years in the role. Marsh is due to begin at Scotch in time for the start of the 2023 school year.

Marsh said it would be “a privilege to continue to build upon Scotch’s outstanding reputation in the area of character education and to help produce young men who will serve and shape their communities, the nation and the world”.