‘Your cities will be targeted’: Screaming former Putin advisor warns president is ready to NUKE Britain if it continues to be an ‘aggressor’ in extraordinary rant on BBC Today Programme 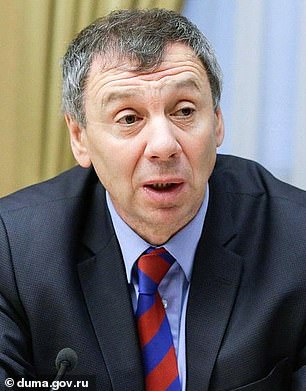 A former Russian MP and Putin advisor warned that British cities could be targeted by Putin’s nukes in a bare-faced tirade this morning on the Today programme.

Sergei Markov had barely exchanged pleasantries with BBC Radio 4 host Justin Webb when he launched into a series of threats about nuclear war.

‘It’s not a good morning for everybody. In Russia there’s partial mobilisation and for your British listeners Vladimir Putin told you that he would be ready to use nuclear weapons against Western countries… including against Great Britain.

‘Your cities will be targeted.’

Markov, who was elected to Russia’s State Duma in 2007 representing Putin’s United Russia party, is now a professor of international relations at a Moscow university and has a history of spouting Putin’s rhetoric in Western media.

‘If Great Britain will continue to be aggressor against Russia… if Prime Minister of Great Britain Liz Truss still has a plan to destroy Russia, people in London should understand the threat [of nuclear weapons],’ he said.

Markov’s unhinged comments came moments after the Russian president announced partial mobilisation to reinforce his faltering war in Ukraine and delivered his most pronounced nuclear threat yet towards the West. 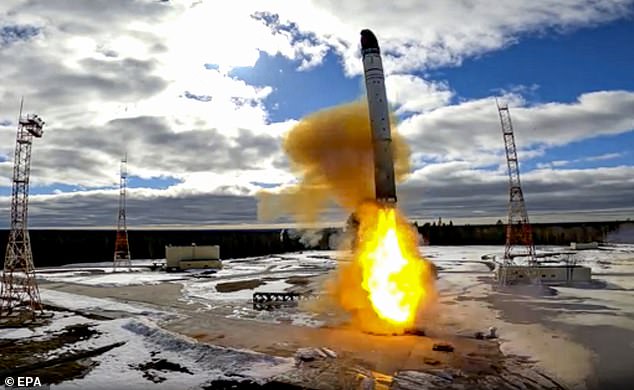 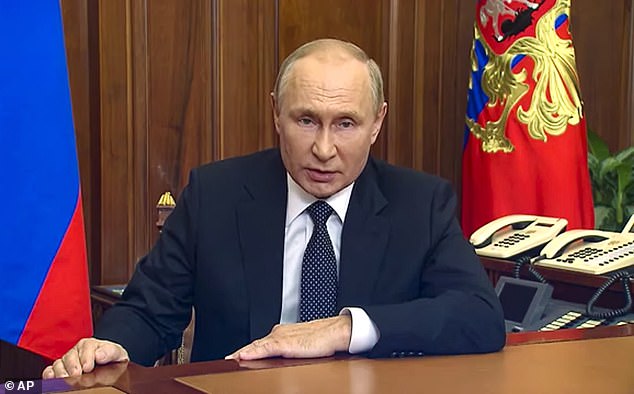 Vladimir Putin has today threatened to nuke the West over Ukraine, as he announced plans to annex occupied parts of its territory to the Russian mainland 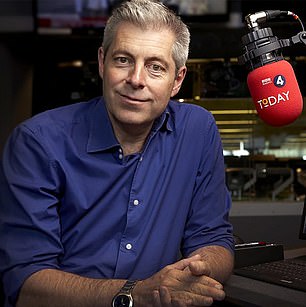 Markov from the get-go set about decrying Western involvement in the Russia-Ukraine conflict and accused the West of using Ukrainian soldiers as ‘slaves’ to deplete the Russian army.

‘It was absolutely clear that Russia has no war against Ukraine…there’s no reason to use tactical nuclear weapons against Ukrainians,’ he said.

Bemused host Justin Webb allowed Markov to reach a conclusion before calmly asking whether the ex-Putin aide and the Russian people believed there could be a winner in a nuclear war.

‘Everybody in the world is now thinking about nuclear war… which could be the result of crazy behaviour of US president Joe Biden and prime ministers of Great Britain Boris Johnson and [Liz] Truss,’ Markov retorted.

During this morning’s speech in which he announced a partial mobilisation of Russian military reservists to fight in Ukraine, Putin in no uncertain terms told Western nations he was prepared to deploy nuclear weapons should the West continue to ‘threaten Russia’s ‘territorial integrity’.

‘Our country also has various means of defence, and in some components more advanced than those of NATO countries,’ the Kremlin chief announced. 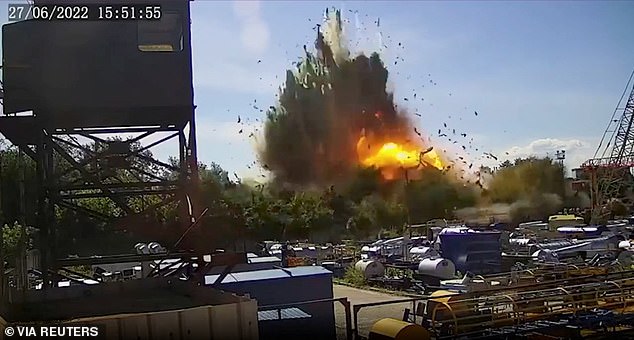 Putin attempted to revise history in his address, claiming the West was using Ukrainians as cannon fodder despite his military striking civilian targets (pictured) 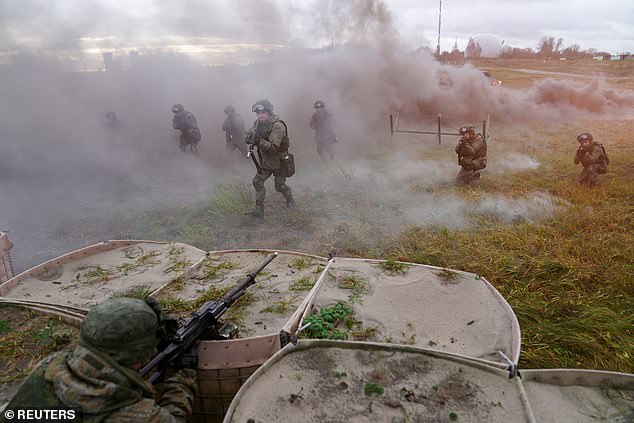 Russia will also carry out a partial military mobilisation, Putin said, with veterans and reservists with combat or service experience called up (pictured, Russian marines in training)

‘When the territorial integrity of our country is threatened, we will use all the means at our disposal to defend Russia and our people, this is not a bluff.

‘Russian citizens can be sure that the territorial integrity of our homeland, our independence and our freedom will be secured by all the means at our disposal.

‘Those who are trying to blackmail us with nuclear weapons should know that the winds may blow in their direction.’

The warmongering Russian leader claimed he was responding to threats from unnamed high NATO officials ‘about the possibility of using weapons of mass destruction – nuclear weapons – against Russia’.