A teenager was among four migrants who perished in the English Channel when their dinghy sank in the early hours of Wednesday morning, authorities have revealed – as the search for any remaining survivors was called off last night.

Some 43 asylum seekers were plucked from the freezing waters off the coast of Kent when their vessel came into trouble at around 2am – however four died, with the same number feared to have been missing.

Kent County Council leader Roger Gough told a council meeting yesterday that a youngster was one of the fatalities, while 12 of the 39 who survived were children travelling on their own.

The tragedy, he said, was a ‘sobering reminder of the human costs of what is an ongoing crisis’. 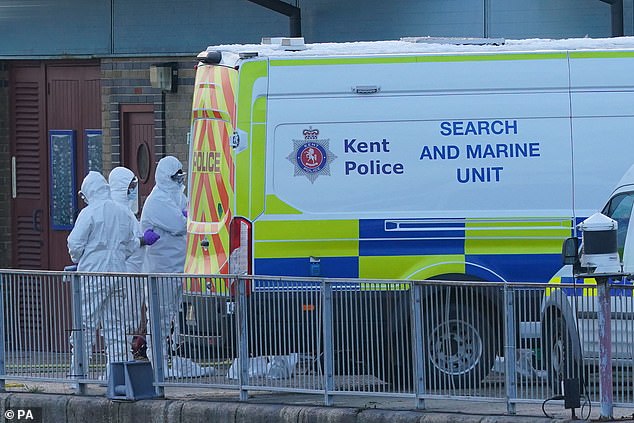 Some 43 asylum seekers were plucked from the freezing waters off the coast of Kent when their vessel came into trouble at around 2am – however four died, with the same number feared to have been missing (Pictured: Police Forensic officers at the RNLI station at the Port of Dover after Wednesday’s search) 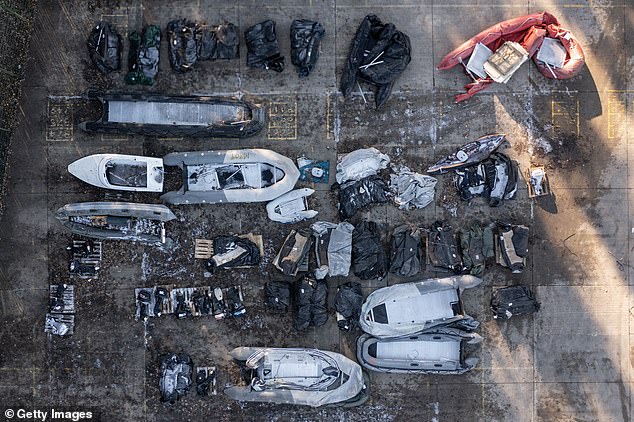 Inflatable craft and boat engines used by migrants to cross the channel are stored in a Home Office facility on December 15, 2022 in Dover, England

The Ministry of Defence (MoD) said 401 migrants were detected in eight boats on Wednesday, not including those who died.

The latest figures take the provisional total for the number of migrants who have made the crossing so far this year to 45,223 – dwarfing last year’s total of 28,561.

On Thursday evening, a spokeswoman for the Government said: ‘The extensive search coordinated by HM Coastguard for people missing from a small boat in the English Channel was concluded at 1700 today.

‘A total of 43 people were recovered from the water, sadly including four fatalities.

‘Our thoughts continue to be with those affected by this tragic incident and with the families of those who have lost their lives.

‘We would like to thank everyone involved in the search and rescue operation.’

During the search, drones were being used to scan the water for anyone unaccounted for, with ships asked to post lookouts.

Meanwhile, the Marine Accident Investigation Branch (MAIB) reviewed evidence of the incident to decide whether an inquiry should be launched.

The major rescue operation off the Kent coast began at 2.16am on Wednesday after reports of a boat in distress, and involved the Royal Navy, French navy, Coastguard, RNLI lifeboats, ambulance service and police. 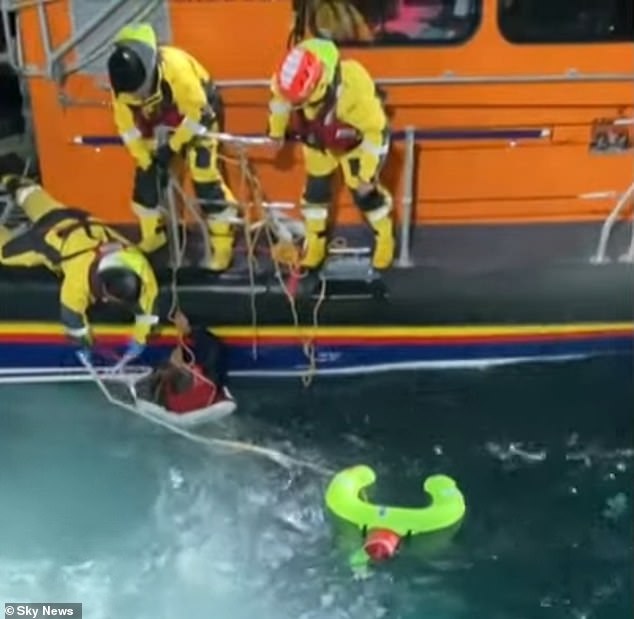 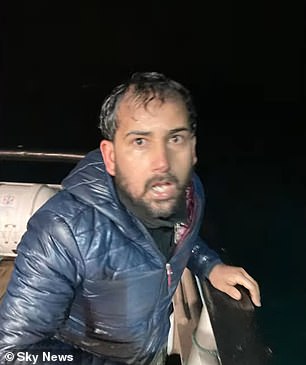 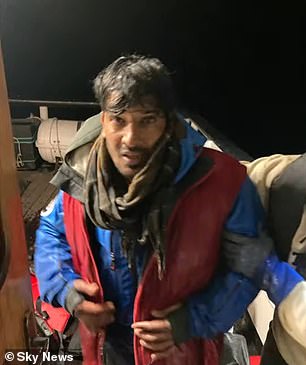 The captain described the scenes as ‘something out of a Second World War movie’, saying they pulled more than 30 people from the water but at least one could not be saved (Pictured: Two men who pulled onboard in the early hours of Wednesday)

A fishing boat was first on the scene, arriving at 3.04am, and was one of three to help in the rescue, the Government said.

Speaking at the Dungeness lifeboat station, the charity’s head of lifeboats said: ‘The fishing boats were already on the scene but it’s fair to say the crews arrived to quite a distressing and harrowing situation with persons in the water in varying levels of distress.’

The incident was ‘hugely traumatic’ for all involved and lifeboat crews had to get those rescued ‘out of the water as quickly as possible’ and ‘deal with various states including being very cold and hypothermic’, he said.

‘Ahead of any investigation or review of what happened, it’s fair to say that the fishing boat and the actions of its crew undoubtedly saved lives, and the RNLI would very much want to recognise that,’ Mr Ling added.

Two casualties were taken to the William Harvey Hospital in Ashford, bosses there said.

One was later discharged but the other had died by the time they arrived, it is understood. 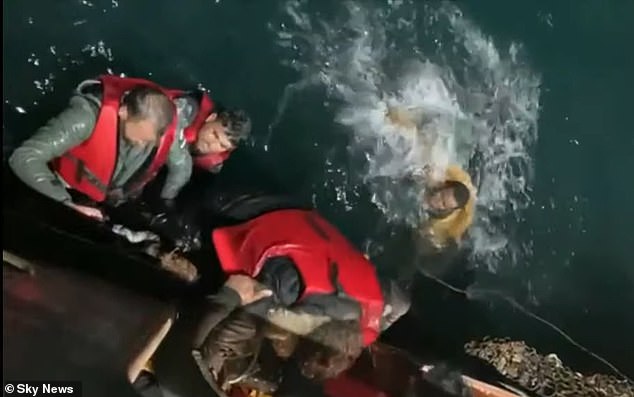 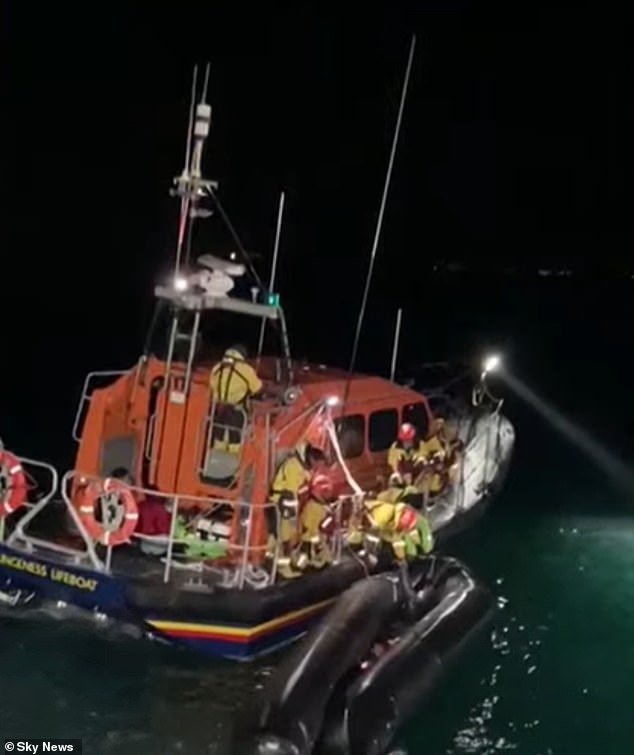 ‘A decision on whether an investigation will be launched will be made once the evidence has been reviewed.’

The perilous crossing on Wednesday came despite freezing temperatures and just hours after Prime Minister Rishi Sunak announced a new crackdown on illegal immigration – which some MPs said is more vital than ever following the tragic events, which were allegedly orchestrated by a trafficker in France who charged each migrant £5,000.

Footage from the rescue operation showed fear and terror etched onto the faces of some of the young men and boys who risked their lives to make it to Britain.

A spokesman for a French charity said it was a voice message in the early hours of the morning from migrants in a waterlogged boat begging for help that first raised the alarm, and that babies could be heard screaming in the background.

Nikolai Posner, communications officer for Utopia 56 which helps migrants in Calais, said a 22-second WhatsApp voice note was left at around 2am UK time.

In the message, a man can be heard saying ‘help us, help us’ and that there was water inside the boat with ‘families and kids’ on board, Mr Posner told PA. 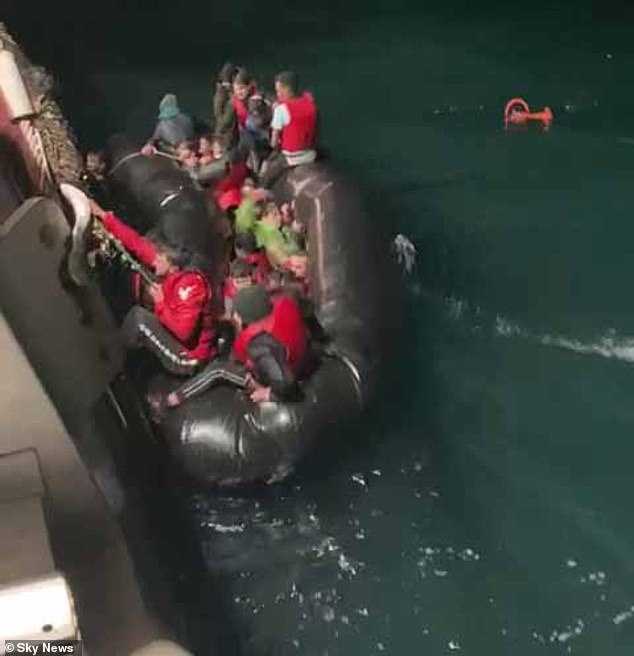 The first images from the scene, obtained exclusively by Sky News, show a number of migrants being rescued from an inflatable boat 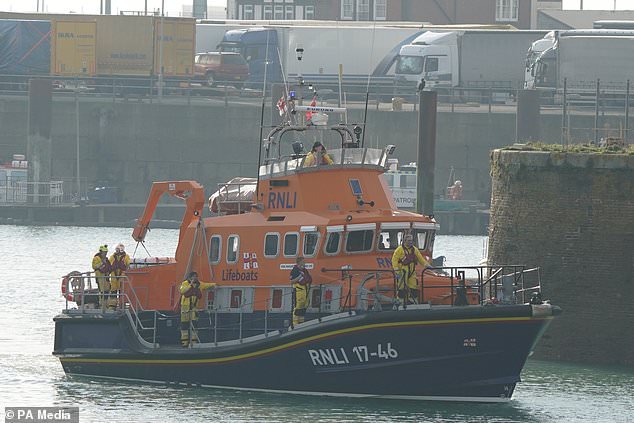 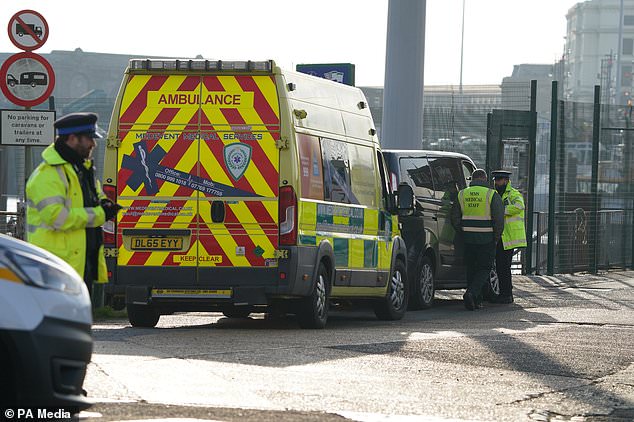 Mr Posner said the charity tried to respond to the message but the reply was not received, then they contacted both the French and UK coastguards. It is unclear why a rescue boat was only launched an hour after the charity informed coastguards of the distress message, Mr Posner said, adding: ‘We don’t know what really happened during that time.’

Ben Squire, owner of a fishing vessel that first arrived to the scene, told MailOnline how he rescued dozens of migrants.

He said: ‘We managed to rescue 31 people, the rest were picked up by Costguard or unfortunately have died or are presumed missing.

‘We took in four children from the boat. The youngest was an 11-year-old boy from Afghanistan, who was with his family. The other children came from Senegal and Afghanistan.

‘Those brought aboard were in various conditions. Some were critical, others were less seriously injured, who were given a hot shower, food and the crews’ dry clothing.

‘As I understand it, there were at least four people who were dead in the water. Others are believed missing.

‘Ray and the crew saved so many lives, they acted quickly and are all heroes.’

The fishing crew, skippered by Ray Strachan, earlier gave a shocking account of how drowning migrants ‘screamed’ for help.

The captain Ray described the scenes as ‘something out of a Second World War movie’, telling Sky News: ‘There were people in the water everywhere, screaming.’

Those hauled aboard – who came from Afghanistan, Iraq, Senegal and India – said they had paid £5,000 to a trafficker in France for their passage.