Coronavirus infections continue to rise across Europe, with France, the UK, Austria and the Czech Republic now all fighting second waves.

The Czech Republic reported its biggest one-day increase in infections for a third straight day on Sunday, recording 1541 cases as the country battles a surge in the virus. 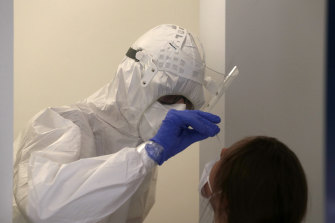 A woman gets tested for COVID-19 in Prague, Czech Republic on Saturday.Credit:AP

It was the fifth day in a row with new infections above 1000 for the country of just 10.7 million after cases began to accelerate in August. One state health official confirmed a second wave was under way.

Adjusted for population, the country has reported 94 cases per 100,000 inhabitants over the last 14 days, according to the European Centre for Disease Prevention and Control data. Only Spain and France have seen a bigger spike in that time.

The Czech Republic came through an initial outbreak that began in March relatively well compared to Western Europe and has kept the death toll lower than most.

Hospitalisations remain below peaks of over 400 seen in the first few months of the outbreak, but figures are growing, with 297 patients as of Friday compared to 172 on September 1.

The country was one of the first in Europe to mandate wearing masks, shut schools and retail businesses, and restricted travel to contain the spread of the virus.

It was also quick to ease measures going into the summer months and aims to avoid repeating the harsh lockdowns that helped lead to a record 11 per cent year-on-year contraction in the economy in the second quarter. Last week, it tightened rules for face mask use across the country.

In France, 7183 new cases were reported on Sunday, down from a record 10,561 new infections on Saturday.

In a daily website update, the French health ministry also reported the number of arrivals in hospital for COVID-19 over the past week had risen to 2464 compared with 2432 recorded on Saturday. 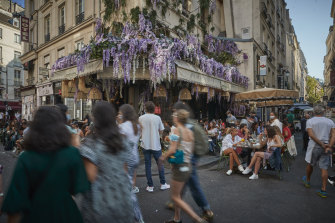 Packed cafes and restaurants on the Rue de Buci in Paris on Sunday.Credit:Getty Images

These included 427 admissions to intensive care units over the past seven days, up from 417 in Saturday's count, it said.

Like other European countries, France has faced a resurgence of the novel coronavirus, leading the government on Friday to promise steps to speed up tests and toughen measures in high-infection zones to avert a return to the general lockdown imposed earlier this year.

The government has called on individuals to be more vigilant in private situations. In an op-ed piece published in French newspaper Le Journal du Dimanche on Sunday, six doctors called for people to avoid private gatherings altogether.

The death toll since the start of the COVID-19 outbreak this year in French hospitals and nursing homes had reached 30,916, with six deaths recorded in the past 24 hours, according to the health ministry.

Austria is seeing the start of a second wave, the country's leader said on Sunday, urging citizens to comply with reinforced rules to keep down new cases.

Austria had a relatively successful first phase of the pandemic, but has joined other European countries in seeing a rise in infections in recent weeks. It recorded 869 new infections on Friday, the highest daily figure since late March.

Chancellor Sebastian Kurz announced that day that the government would reimpose measures such as mandatory mask-wearing in shops. Kurz stepped up his rhetoric on Sunday.

About half of the new infections are in Vienna, the capital, but infections are rising across the country, Kurz said. He noted most people are getting infected at family gatherings, birthday parties and other private events.

He urged companies to consider asking employers to work from home. "It makes sense if, where companies want to, where it works well and where experiences are positive, this is continued and expanded," he said.

Austria, which has about 8.9 million people, has recorded more than 33,000 infections and has seen 750 virus-related deaths. Experts say all numbers in the pandemic are undercounts due to missed mild cases and limited testing.

The UK, meanwhile, reported 3330 new cases on Sunday, according to government data, compared with 3497 a day earlier. It also reported a further five new deaths from the coronavirus.

England is to bring in a new ban on social gatherings on Monday in a bid to curb the increasing rise in infections.

Around 4000 health workers demonstrated in Brussels on Sunday, calling for more spending on the healthcare system in a country that was badly hit by the coronavirus pandemic.

With political parties in Belgium still struggling to form a permanent government more than a year after a national election, the workers called on politicians to increase pay and healthcare funding.

"We came here in Brussels to demonstrate and demand more respect for our job and a pay rise," said one protester who gave her name only as Marie-Stella and who has worked as a nurse since 1988.

The event was organised by health workers' group La Santé en Lutte, which is demanding an end to the "commodification of care" and says the coronavirus crisis has exposed the fragility of Belgium's healthcare system.

Belgium has reported 9923 fatalities from COVID-19, which puts it the third-highest in the world for deaths per 100,000 people.

Israel's government has approved the imposition of a three-week nationwide lockdown – starting on Friday – to contain the spread of the coronavirus. Israelis will have to stay within 500 metres of their houses.

The new measure was approved after cases of COVID-19 spiked in recent weeks, and amid criticism of Israeli Prime Minister Benjamin Netanyahu's handling of the virus and the economy.

Our weekly newsletter will deliver expert analysis of the race to the White House from our US correspondent Matthew Knott. Sign up for The Sydney Morning Herald‘s newsletter here, The Age‘s here, Brisbane Times‘ here and WAtoday‘s here.