The risk of arson and terrorism has been cited by the government as its reason for withholding a list of hundreds of buildings with flammable cladding. 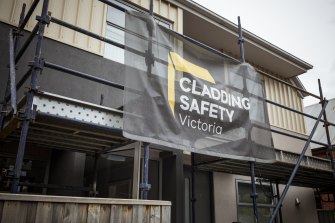 A building on Weston Street, Brunswick East. The Cladding Safety Victoria logo has been used at sites where affected properties are being rectified.Credit:Chris Hopkins

But protective hoarding on scaffolding at most of the project sites receiving publicly funded repairs has featured the large Cladding Safety Victoria logo, prompting the state opposition to dismiss the arson risk as “spin” and engineers to call for greater transparency.

After inquiries from The Age late last week, the Cladding Safety Victoria signs were taken down. Many of the signs had been displayed on properties for several weeks.

Flammable cladding is being removed from 80 buildings by Cladding Safety Victoria, the body created by the state government to carry out its $600 million cladding rectification program. It has finished work on 11 buildings and aims to start work on 200 more by the end of June.

The program was accelerated last year to create jobs during the pandemic recovery, with aims to start work on up to 400 buildings within two years. 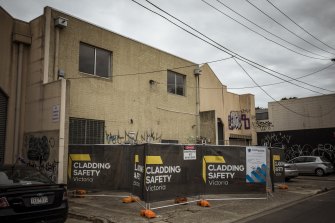 Fire safety engineer Jonathan Barnett said there was no reason the full list should not be made public.

“There is no reason to hide the buildings. Let’s produce the list so everyone knows what they are buying. The consumer should be able to make an informed decision.

“I just don’t see any reason for not having transparency.”

“On balance, I think any increased arson risks are outweighed by the need to be transparent about non-compliant buildings, particularly for tenants and purchasers who would otherwise not be aware of the issue and therefore can’t make informed decisions regarding their personal safety or future financial commitments,” he said.

He said buildings assessed as not complying with the building code, including those high-risk sites considered potentially dangerous, have building notices or orders served on them.

“Those buildings are already on the public council register, anyone can go to the council and ask to see a copy of that document,” he said.

“If the intention is to limit public access to the list of high-risk buildings, then legislative amendment is necessary to remove those at-risk buildings from the public register at councils.”

Opposition planning spokesman Tim Smith, who for several years has been pushing for the list to be made public, said the use of mesh with Cladding Safety Victoria logos showed the claims of arson risks were “government spin”.

“The government always argued that it was an arson risk to disclose these properties to the market,” he said. “I suspect it’s a difficult argument for them to maintain that they can’t disclose these buildings to the public given they are doing it inadvertently anyway.

“The property market must have full transparency as to which buildings are still clad in dangerous combustible material.”

“All our sites must have protective hoarding around the scaffolding to avoid anything falling from height,” he said. “We are removing hoarding that has the Cladding Safety Victoria logo.”

Concerns about cladding in Victoria were fuelled by the Lacrosse tower fire in Docklands in 2014, the 2017 Grenfell Tower fire that killed 72 people in London and a fire at the Neo 200 apartment block in the Melbourne CBD in 2019. 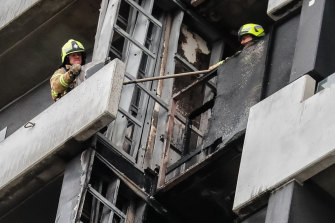 In 2017 the government established the Victorian Cladding Taskforce to investigate and address the use of non-compliant building materials. A statewide cladding audit of 2200 buildings identified hundreds that posed a high risk of a cladding fire.