Shocking surveillance footage shows security guard, 51, being shot in the back of the head and robbed before another man steals items from his dead body

Surveillance footage shows the gruesome moment a security guard was shot in the back of the head at close range before being robbed.

Anthony Frazier, 51, was shot and killed outside an American Seafood and Wings, where he worked as a security guard, on Cleveland Avenue in Atlanta, Georgia, on Monday around 7pm by an unidentified man wearing black jeans and a black t-shirt.

Surveillance video released by police shows Frazier exiting the SUV, looking behind him as his attacker rounds the corner and another man sits on the curb smoking. Seemingly unaware of the upcoming attack, Frazier calmly gets out of his car and lights his own cigarette.

His attacker reportedly shot him in the back of his head, which is not shown in the edited surveillance footage, before walking away. 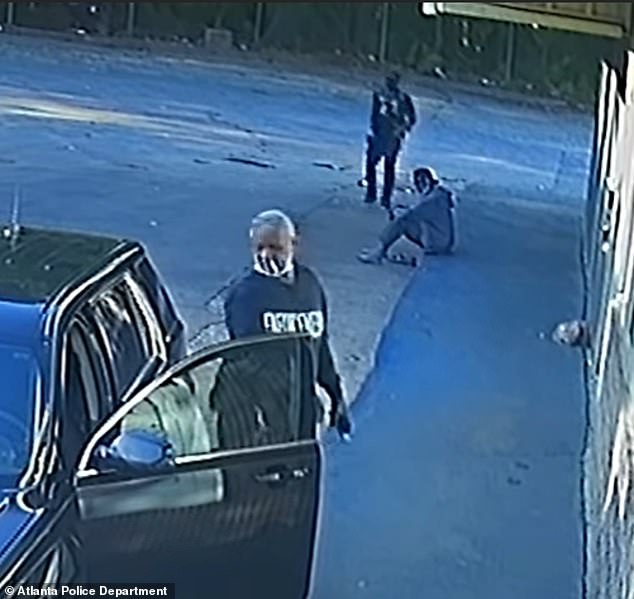 Anthony Frazier, 51, (pictured getting out of the car) was shot and killed outside an American Seafood and Wings – where he was a security guard – in Atlanta, Georgia, on Monday 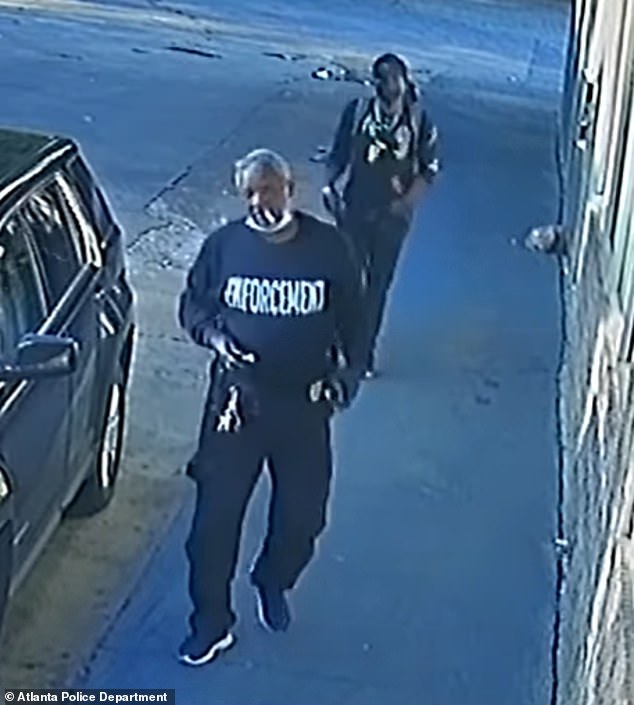 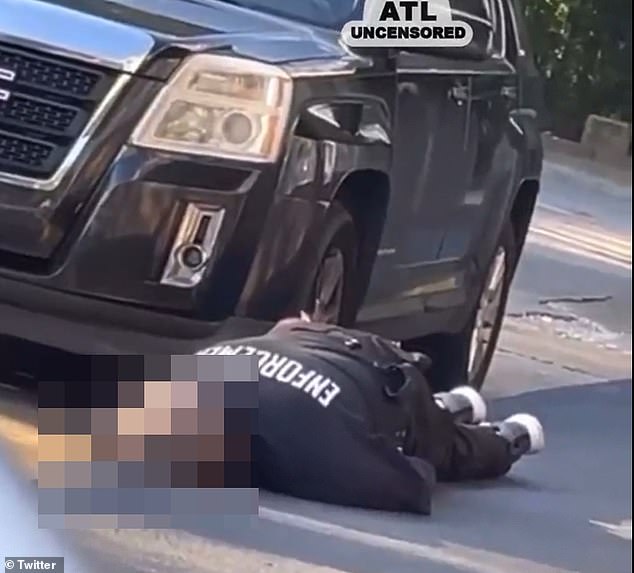 A bystander video, posted to Twitter, shows the security guard lying on the ground with blood streaming from his head 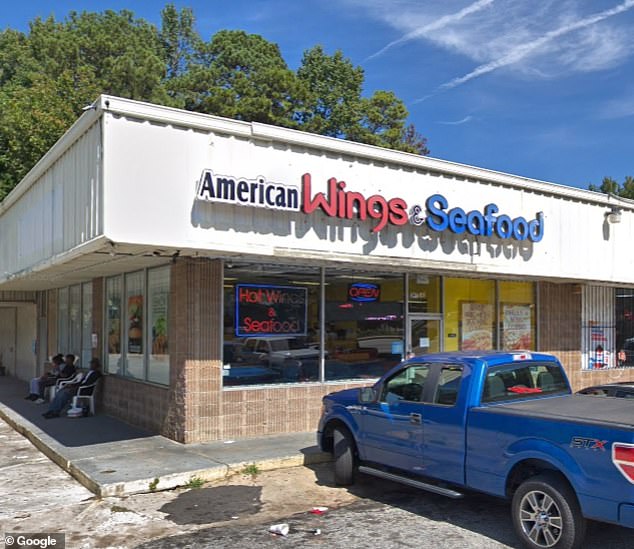 He was shot outside American Wings and Seafood on Cleveland Avenue

Seconds later, the attacker turns back around and can be seen taking what appears to be Frazier’s service weapon, shoving it into the waistband of his jeans.

He appears to take something else, but it is unclear what the object is, before he calmly walks back past the witness, who police are also looking for.

The witness – an older man wearing a gray jacket, jeans, and a hat – walks by Frazier and shakes his head without stopping.

Shortly after, three others – two men and one woman – round the corner. One of the group members, who is wearing a black shirt with a design on the back, appears to take something off Frazier’s body, but it is unclear what it is.

The other man, wearing a Pizza Hut shirt, watches as the woman stands back and observes.

It is unclear if the three have any relation to the shooter. 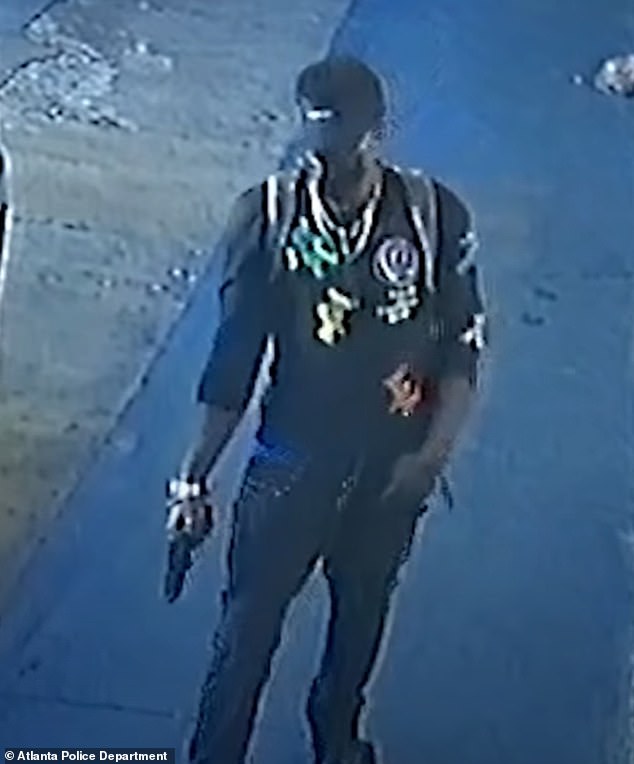 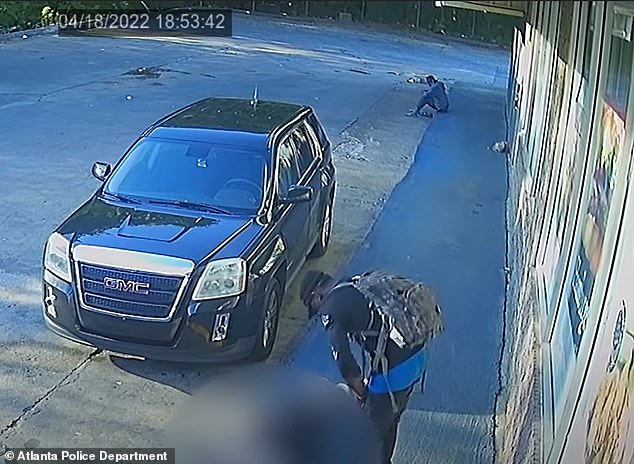 He stole from Frazier as a witness (upper right) sat on the sidewalk, smoking a cigarette

Emergency services and police reportedly arrived moments after the trio left the scene. The victim was declared dead on the sidewalk, according to Fox 5 Atlanta.

Restaurant customers were surprised to learn of the killing. Regular Kam Kae told Channel 2 News: ‘[He’s] so attentive, he’s always watched the door. Why would somebody do that to him?’

Kae said Frazier used to sit in the ‘back booth every single day’ and ‘didn’t bother nobody.’ She also said the owners ‘hired security just their safety, as well as, the consumers’ safety.’

‘He was a good guy,’ she said. ‘I can’t even put together why they would do that to him, that doesn’t even make sense.’ 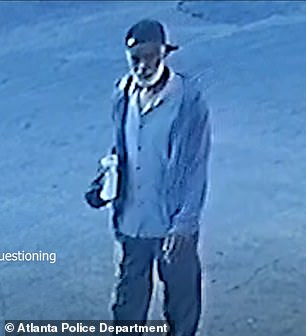 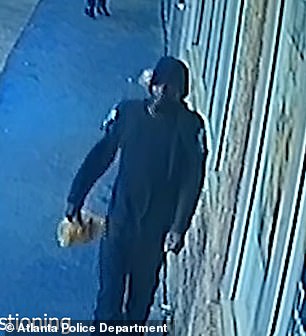 Police are also looking for four people, including the witness (left), who saw the body. Another man (right) also appeared to have taken something from Frazier, but it is unclear what it was 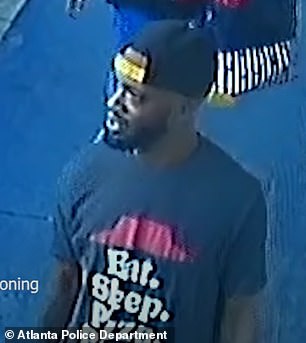 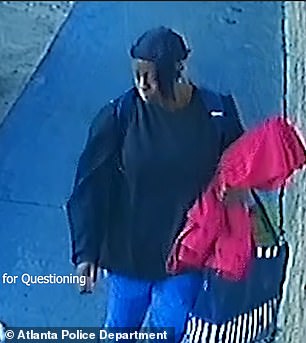 The other two did not take anything from Frazier’s body. One witness, wearing a Pizza Hut shirt, (left) appeared shocked after seeing the body, and the woman (right) stayed a few feet away

Councilman Antonio Lewis, who stopped by the scene on Monday after hearing about it, is now suggesting lockboxes as a way to curb gun-related crimes.

‘We have to find a way to balance it out. You can’t talk about crime and talk about dangers and violent crime, while making it easier access to get these guns,’ he told Channel 2 News.

The suspect is still at large, as of Wednesday afternoon, and the Atlanta Police Department is offering a $2,000 reward for help.