HANOI (Reuters) – Dozens of North Korean security men with identical haircuts and suits marched off an aircraft at Hanoi airport on Sunday, as Vietnamese soldiers searched through shrubbery outside a posh hotel in the city center days before a North Korea-U.S. summit. 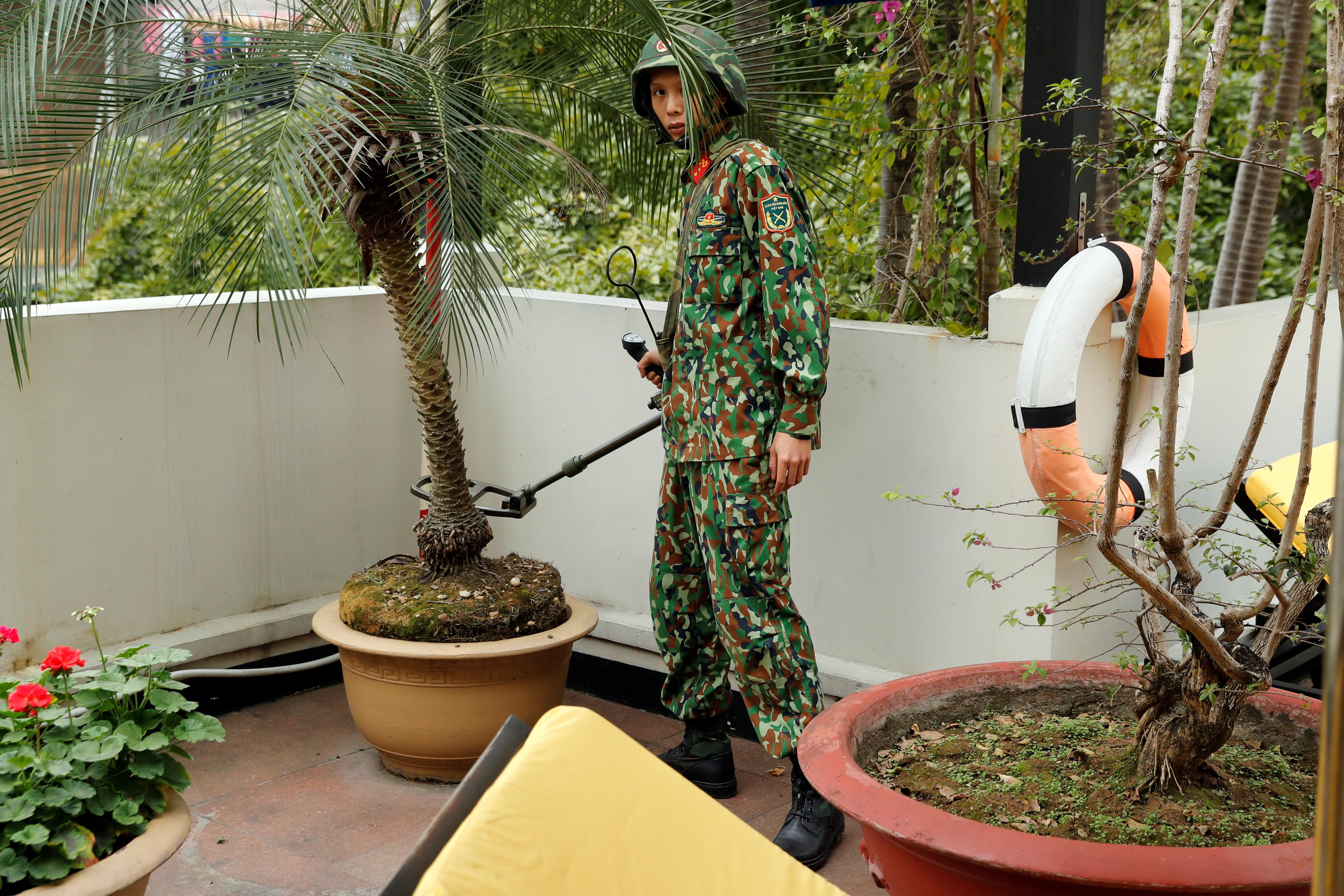 North Korean leader Kim Jong Un and U.S. President Donald Trump will meet in Hanoi on Wednesday and Thursday, hoping to build on a commitment they made at their first meeting, in Singapore in June, to rid the Korean peninsula of nuclear bombs.

They are expected to meet for their second summit in Hanoi’s Government Guesthouse, an elegant, colonial-era building in the city center, or at the nearby Metropole Hotel, sources have told Reuters.

Vietnam has confirmed that Kim will arrive for an official goodwill visit as well as the summit with Trump, but has released no further details regarding the location of meetings.

A Reuters witness saw Vietnamese soldiers in camouflaged fatigues sweeping the area around the Metropole with a metal detector. Its potted plants were thoroughly checked.

Teams of soldiers were also seen busy on nearby rooftops, installing radio devices and equipment under camouflaged webbing.

Prime Minister Nguyen Xuan Phuc has ordered that security should be a top priority for the summit, the government said in a post on its website.

The Southeast Asian country is relishing its role as peace maker, seeing it as an opportunity to burnish its international standing and balance it foreign ties.

Media published photographs taken at Hanoi’s Noi Bai International Airport showing a North Korean cargo plane with its loading door open and the security men filing off onto the tarmac.

Some banners proclaiming the summit have gone up along Hanoi’s tree-lined streets and some lamp posts are decked with North Korean, Vietnamese and U.S. flags fluttering above a handshake design, but apart from that, for now at least, life goes on as normal.

Motorists have been warned to expect road closures when the leaders are in town.

Security at the train station in the town of Dang Dong, on the Chinese border where Kim is expected arrive by train, has also been stepped up.

Vietnamese soldiers were seen patrolling its streets on Sunday.

We will use your email address only for sending you newsletters. Please see our Privacy Notice for details of your data protection rights. As a…