Kuwait’s parliament has unanimously voted to endorse Sheikh Meshaal Al Ahmad Al Sabah as crown prince a day after the new emir named him for the post.

In televised remarks, Sheikh Meshaal said Kuwait would uphold its regional and international commitments and “its path of peace and democratic approach”.

He pledged to “raise the banner of popular participation and promote a tolerant spirit that shuns division.”

Sheikh Nawaf assumed power as emir following the death of his brother Sheikh Sabah Al Ahmad Al Jaber Al Sabah last week at a time of tension between Kuwait’s larger neighbours Saudi Arabia and Iran and as the government tries to shore up finances strained by low oil prices and the COVID-19 pandemic.

Diplomats and analysts say that because of his low-key style and age, Sheikh Nawaf, 83, may delegate a larger portion of responsibilities to the crown prince.

Octogenarian Sheikh Meshaal, a brother of the late emir, became deputy head of the National Guard in 2004 and previously served as the head of state security for 13 years. As a graduate of the UK’s Hendon Police College, Sheikh Meshaal was credited with helping to reform Kuwait’s National Guard.

Experts on Kuwait said he had in the past declined offers of senior positions, steering clear of political battles and public-facing roles.

Sheikh Meshaal’s rise stands in contrast to some other Gulf states, most notably Saudi Arabia, where ruling families are starting to give top jobs to younger princes.

Kuwait is due to hold a parliamentary election this year. 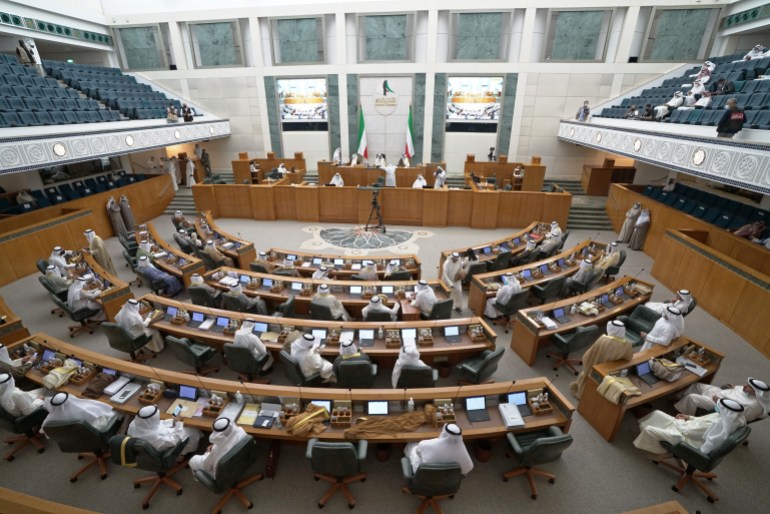 The new emir is expected to uphold oil policy and foreign policy shaped by Sheikh Sabah that strove for Arab detente and balanced ties between Saudi Arabia, Iran and former occupier Iraq.

Turkey has sided with Qatar in a Gulf row that has seen Saudi Arabia and its allies impose a boycott on the gas-rich Gulf nation since mid-2017, a bitter rift which Sheikh Sabah tried in vain to resolve.

Speaking to Al Jazeera before the announcement, Dania Thafer, director of the Gulf International Forum, said Sheikh Meshaal “has a very close relationship with the Emir Sheikh Nawaf Al Ahmad Al Sabah, and is viewed to have good relations with neighbours such as Saudi Arabia and the UAE”.

Kuwait’s emir and crown prince are expected to focus on domestic issues with parliamentary elections due this year and at a time the government is trying to tackle a liquidity crunch.

A pressing matter, diplomats and analysts say, is debt legislation that had met resistance in parliament and which would allow Kuwait to tap international debt markets to help it finance the budget deficit.

Frequent clashes between cabinet and parliament, the Gulf nation’s oldest and most powerful legislature, have led to successive government reshuffles and dissolution of parliament, hindering investment and reform efforts.