SHOCKING footage has captured the moment a tornado barreled towards a group of storm chasers as heavy rainfall flooded parts of Oklahoma in the latest extreme weather episode.

A series of twisters ripped through parts of Oklahoma and Texas Wednesday evening as 30million Americans were placed under further weather warnings on Thursday and Friday. 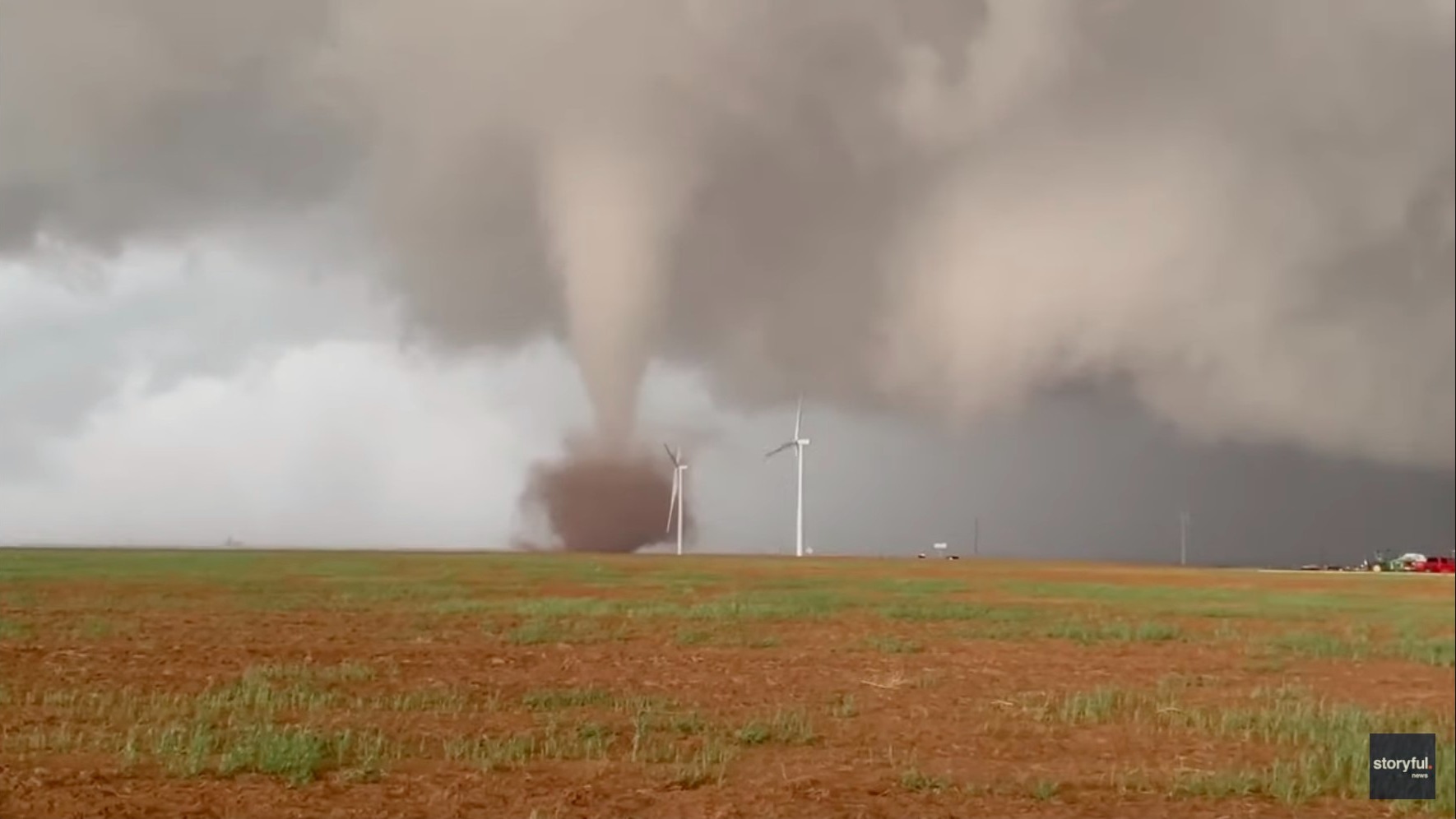 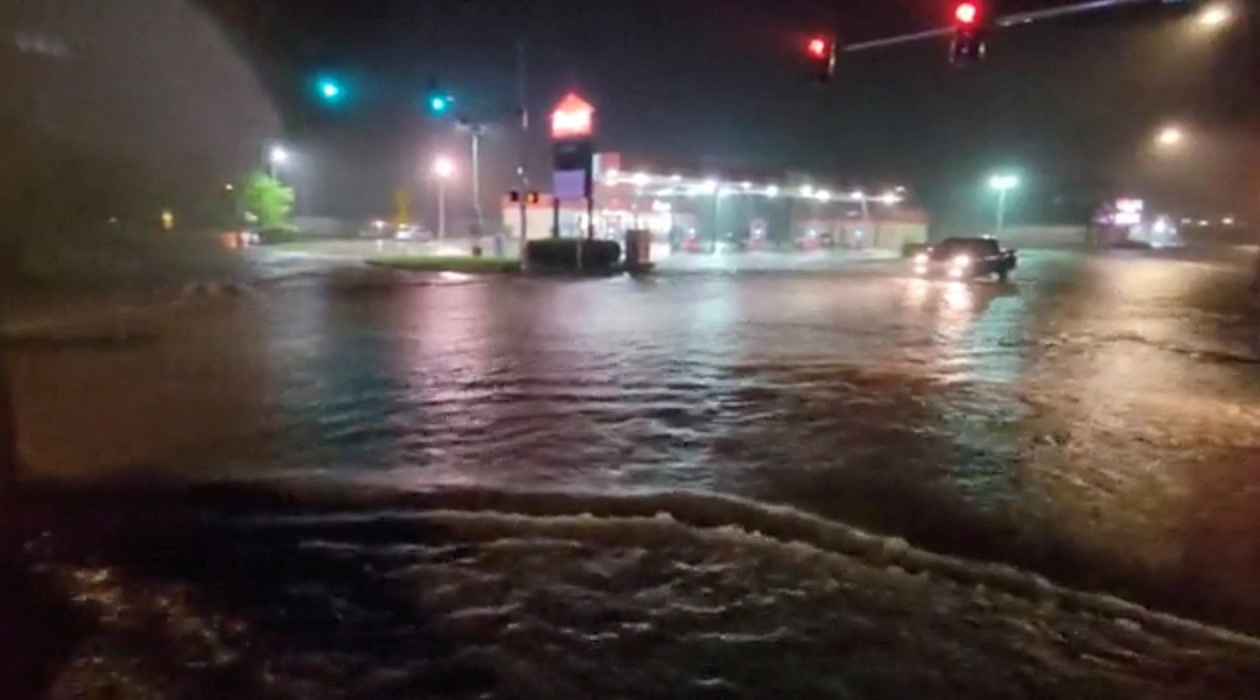 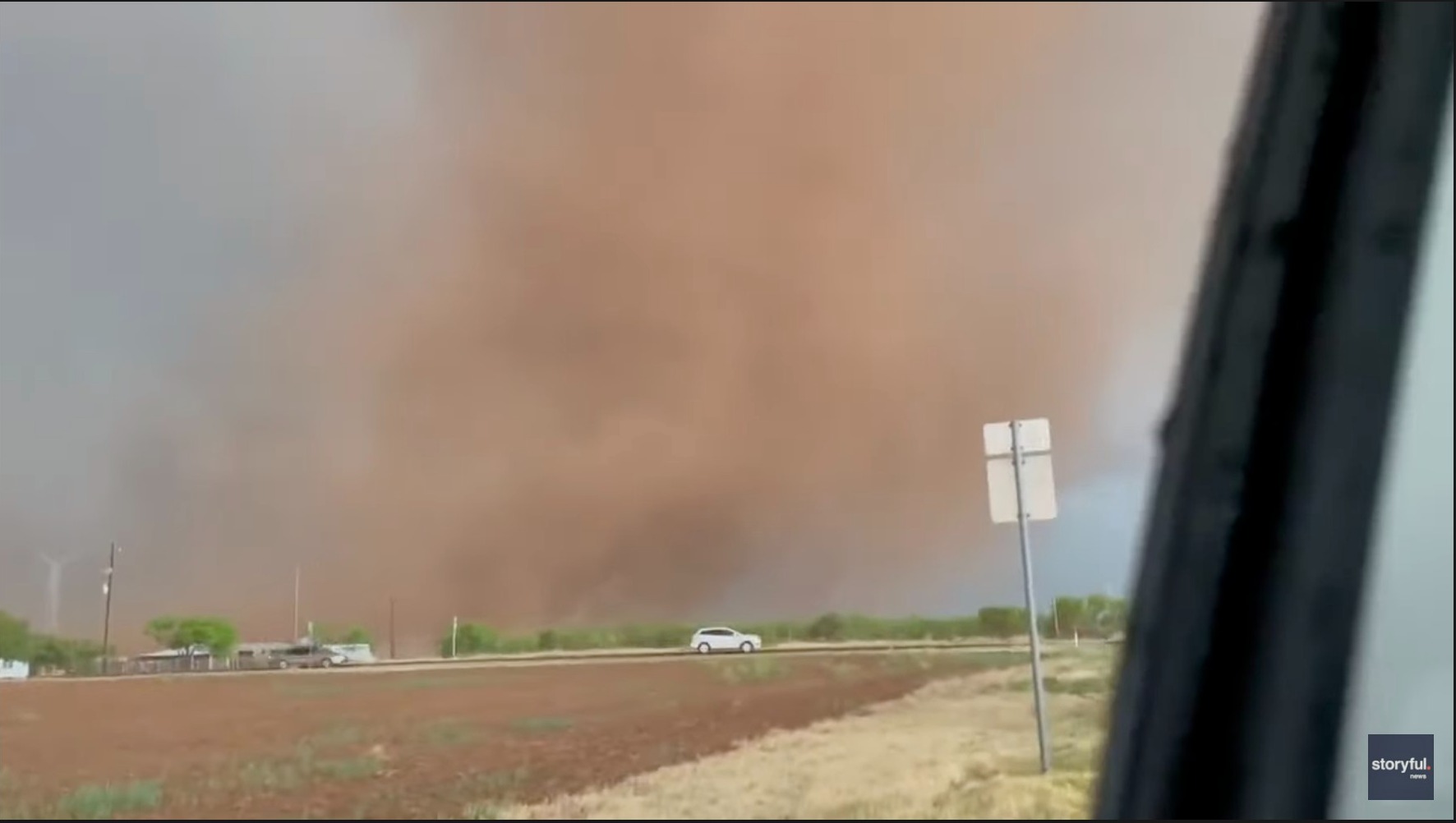 A group of storm chasers ran for their lives after a tornado touched down next to a wind farm in Crowell, Texas.

Storm watcher Wesley James Jackson was live streaming on Facebook when the tornado moved towards him and his group, forcing them to return to their vehicles and drive to safety.

'WE GOTTA GET OUT OF HERE'

The group of men continued to record the massive twister as they flee the scene in their vehicle. 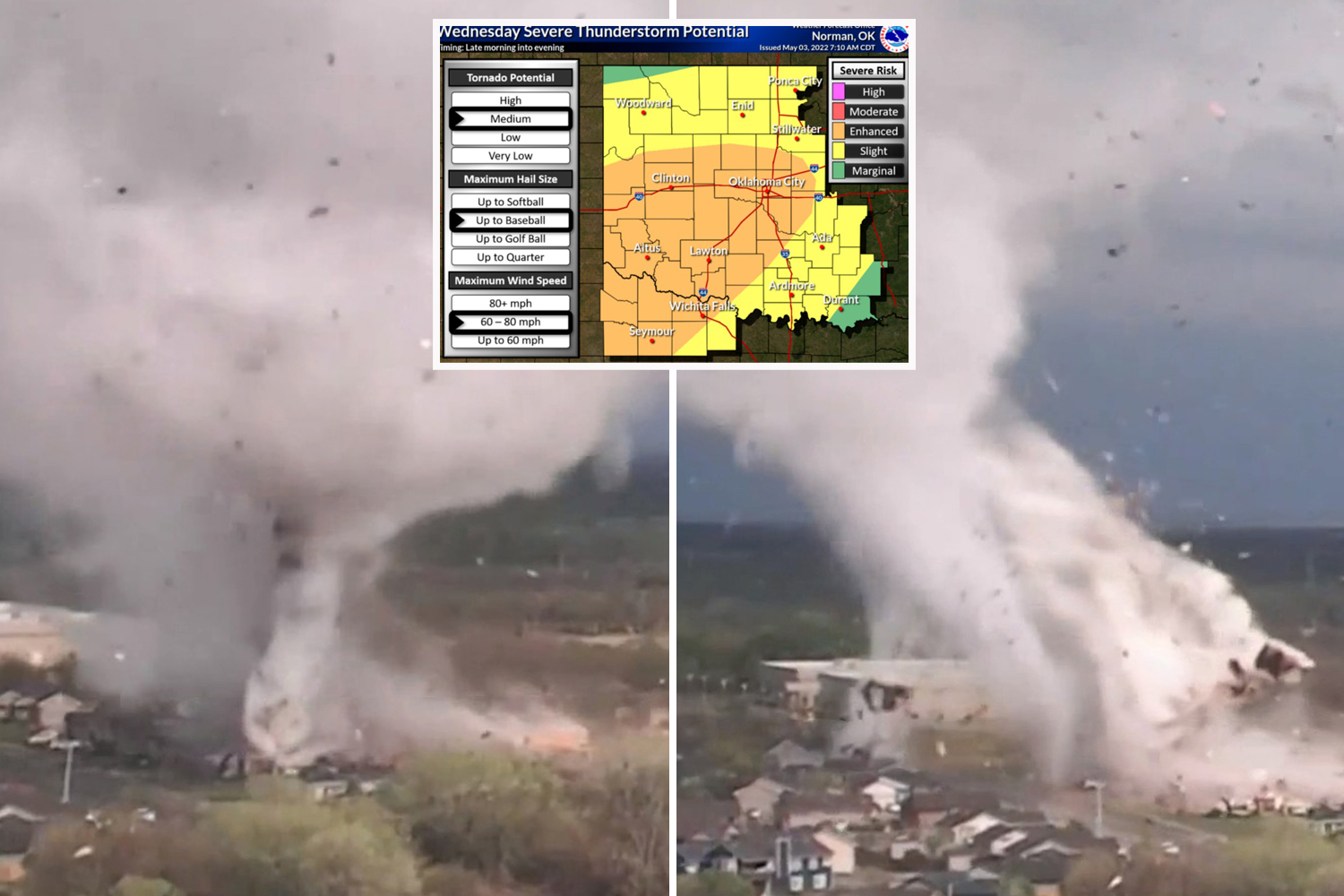 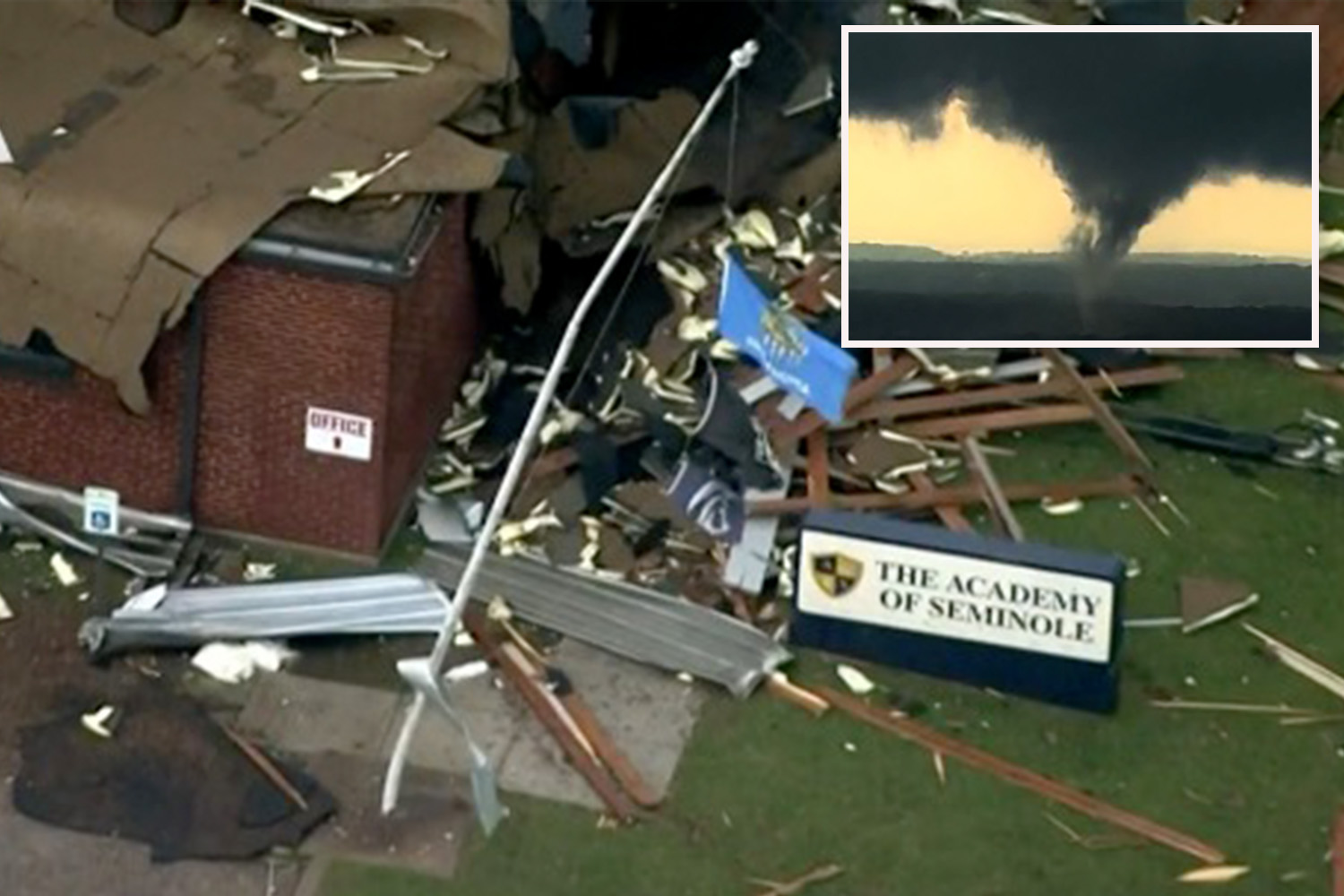 ‘Multi-vortex’ tornado destroys buildings with trail of debris in Oklahoma

"Large tornado, it just got big. It just got f***ing giant. Holy s***. Just got large out of nowhere. We gotta get out of here."

A severe thunderstorm warning was also issued after storms brought up to 70 mph wind gusts and tennis ball-sized hail.

Passengers terrified as untrained pilot forced to turn back mid-flight

Watford next manager odds: Dyche and Nuno the two favourites to take over

A funnel cloud was seen near the rural town of Maud around 6.30pm, near Pottawatomie and Seminole counties.

Debris was scattered around Seminole, “completely destroying” several buildings in the downtown area, as seen in videos posted to social media.

No injuries were reported, but over 12,000 customers were without power in Seminole, according to Oklahoma Gas & Electric.

“Thunderstorms continue to develop across Oklahoma and western north Texas,” tweeted the NWS.

“The environment continues to be supportive of intensifying these storms, in particular near and south of (Interstate) 40. Stay weather aware this evening!”

Local reports indicated that 10 people were trapped in a storm shelter in Seminole, including a baby and a person in a wheelchair.

Multiple residents and firefighters helped with the rescue and everyone was reportedly safe.

Video showed the frightening storm and a possible twister in Maud.

A "multi-vortex tornado" then headed north to Seminole, where a reporter indicated there was major damage, including roofs ripped from multiple structures.

Power lines were said to be covering roads as a video showed sheet metal and debris in the streets.

Multiple buildings were reportedly destroyed as the Academy of Seminole had its roof ripped off and debris was thrown all around it.

The storm could potentially bring another round of isolated tornadoes and large hail are also possible.

More storms will sweep across the southeast, middle Ohio Vallet and mid-Atlantic states by Friday.

Some storms will be strong enough to produce hail and damaging wind gusts. A few tornadoes are also possible.