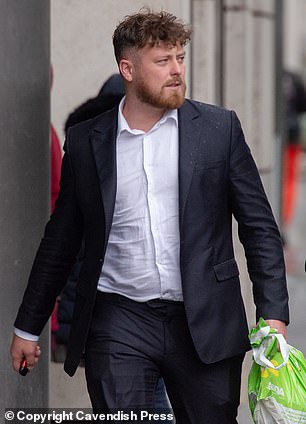 Adam Whittingham, 32, was seen drinking whisky from the bottle on board the Ryanair flight from Morocco to Manchester

This is the shocking moment a Man United fan lashed out at Ryanair cabin crew as he went on the rampage in a row over football that ending in him biting a a police officer’s chest.

Adam Whittingham was jailed for 20 months after drinking whisky from the bottle, punching a passenger in the face, mocking a woman’s ‘scouse’ accent and attacking cabin crew.

The 32-year-old hit a passenger, who was seated next to him, with such force it is believed his victim lost a tooth.

Shocking footage shows his air rage meltdown as terrified passengers scream: ‘There are kids on this plane.’

Whittingham grapples with travellers as they make a desperate bid to restrain him.

The lout, who had problems with drugs and alcohol and had been in rehab three times, had very little memory of what happened.

During the three hour Ryanair flight from Morocco to Manchester, father of one Whittingham pushed an airline steward as he attempted to help himself to drinks from a trolley.

The father-of-one, from Wolverhampton, has convictions for public order and two cautions for assault, both from 2008.

He was still brawling on the aircraft when the plane came into land.

As police dashed to the jet the pilot opened his cockpit window and pleaded with officers for help.

One policeman, who detained Whittingham, suffered a bite wound to the chest and had to undergo blood tests to ensure he had not contracted an infection. 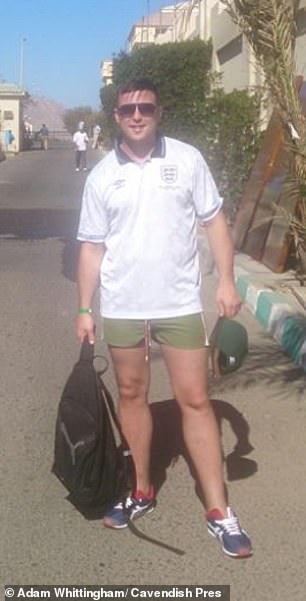 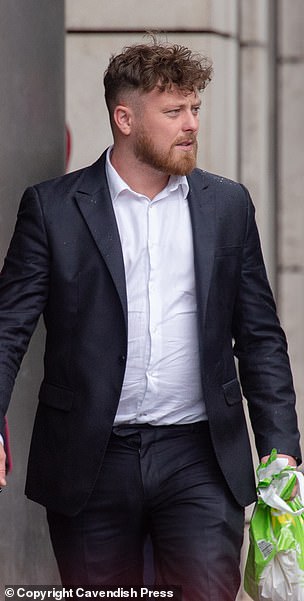 The man, from Wolverhampton, punched a passenger in the face, mocked a woman’s ‘scouse’ accent and attacked two cabin crew who tried to intervene

The arrested man later claimed he was so drunk he could not recall the incident.

The incident took place on February 9 after he boarded a flight at Agadir in Morocco.

Prosecutor Brian Berlyne said: ‘As passenger were waiting to board the flight in Agadir, another passenger noticed Adam Whittingham was being extremely loud and obnoxious and it appeared he was drinking. 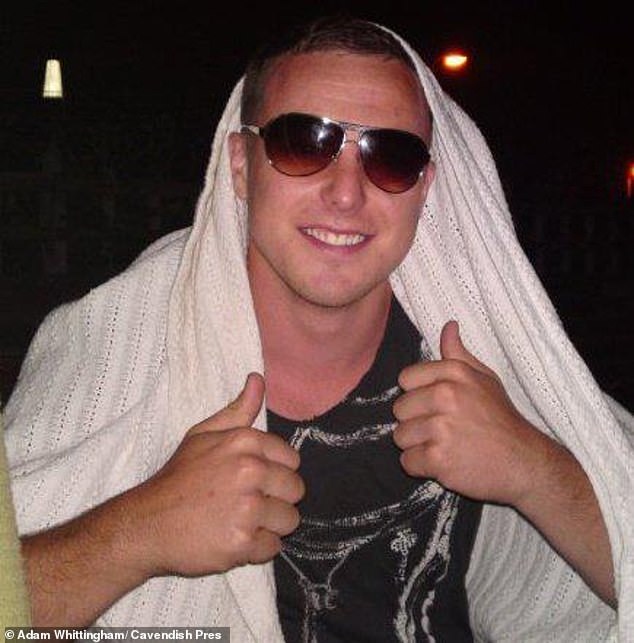 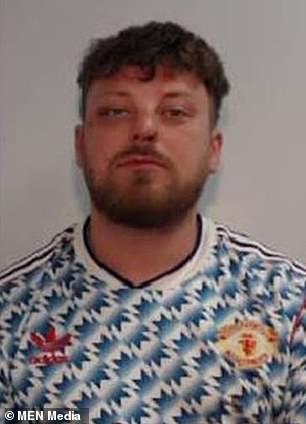 Whittingham boarded the Ryanair flight in Agadir on Saturday 9 February

‘Shortly after take off Mr Whittingham apologised but it was noted he had a bottle of whisky and was drinking straight from the bottle.

‘As he drank more whisky, he became louder and louder.

‘During the flight Mr Whittingham approached the cabin supervisor as he was setting up the trolley and asked for a glass but the supervisor said he was busy and said he would serve him soon.

‘Mr Whittingham then began to lift items off the trolley in search for the glass, and when the cabin supervisor questioned him on this, he pushed him in the face, to the cheek and nose.

‘The supervisor described it as not being forceful but he was concerned Mr Whittingham’s behaviour was aggressive. Whittingham then told him not to tell him what to do.

‘The cabin supervisor spoke to the flight deck and alerted them to the concern that it was possible the flight could be diverted. 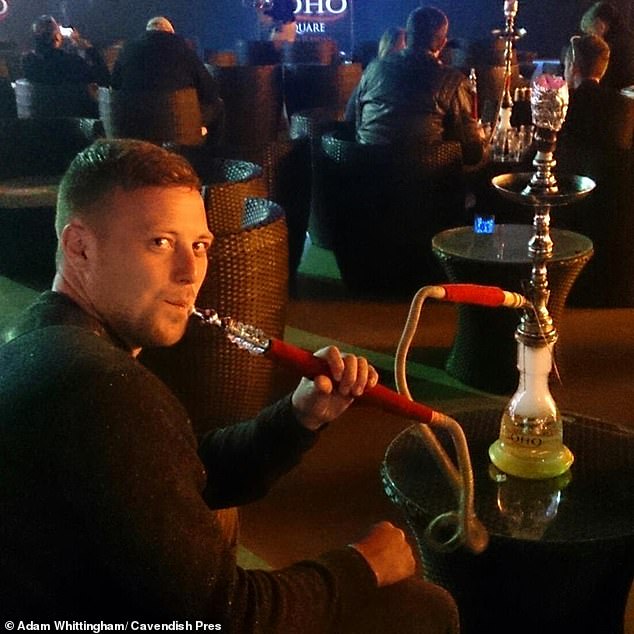 A number of passengers complained about Whittingham’s behaviour. He hit a passenger, who was seated next to him, with such force it is believed his victim lost a tooth

‘The cabin supervisor gave Mr Whittingham time to calm down and asked him to put his bottle away but Mr Whittingham became aggressive and said: “Are you going to take it?”

‘The passenger sitting end to him tried to reason with him but Mr Whittingham became aggressive toward him too.

As the situation escalated, the cabin supervisor called the flight deck again and asked them to divert the plane

The cabin supervisor moved some passengers away from Mr Whittingham to empty seats, including a mother and baby who were seated behind him.

The pilot arranged for different flight plans and inserted them into the system in case he had to be diverted to one of three different airports but Whittingham was deemed manageable. 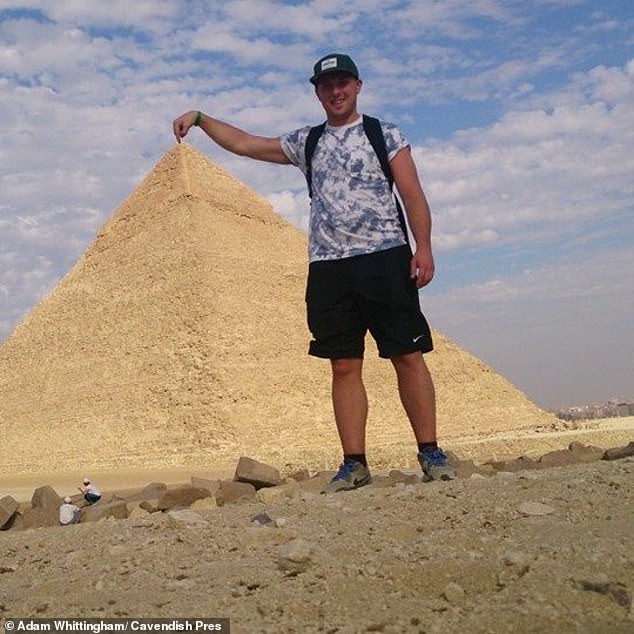 Sentencing Judge Tina Landale told Whittingham: ‘You may have caring responsibilities for your grandfather but these offences are so serious that only immediate custody can be justified’

‘A number of passengers complained about the defendant’s behaviour. He then began to bang his head against the back of the seat an the window and swore repeatedly.

‘He also mocked one of the lady passenger’s Liverpudlian accent.

‘She told him to stop behaving in this manner, but he continued to shout and swear at her and her cousin and a male passenger sitting behind him.

‘One passenger unbuckled her belt ready to block his way in case he tried to move into the aisle to attack them.

‘As the plane was approaching Manchester airport, the lady passenger saw the defendant punch the man sat next to him twice to the face with a number of passengers hearing him complain about losing a tooth.

‘The lady passenger shouted at Mr Whittingham and he proceeded to threaten them.

‘The passengers got out of their seat as the plane was in the process of landing. The defendant then rushed along the aisle towards the male passenger who he had the first argument with.

‘The lady got up out of her seat and blocked his path, but he pushed past her and punched him repeatedly to the forehead causing grazes.

‘Two other passengers went to help and pulled him away from him. By the time they restrained him, the plane was taxi-ing along the runway.

‘The pilot could hear shouting and screaming from the cabin area.’

When the plane came to a stop and the police approached, the pilot leaned out of the cockpit window and  shouted for help.

The first police officer described the situation as ‘chaotic’ as people on the flight were shouting and some were cheering.

Whittingham then flew at the police officer and punched him in the face before rugby tackling him.

The officer pinned Whittingham onto the floor in an attempt to handcuff him.

Mr Berlyne added: ‘Whittingham then bit the police officer on the chest area, which was unprotected by his body armour, and was described to ‘clamp his teeth’ on his chest.

‘The officer then struck him to the face with his elbow causing him to lose his grip on him.

‘As he was being restrained, Whittingham continued to struggle and tried to punch, headbutt and kick the officer.

‘The police officers injuries were a circular bite mark to his chest, a bleeding nose and a swollen lip. He had to have a blood test to make sure he didn’t contract a disease.’

Mobile phone footage was played to the court in which a voice shouted: ‘there’s kids in the plane now’ and a lady shouts ‘are you f****** stupid’.

Bodycam footage was played in which an officer can be seen walking towards the plane as the pilot was shouting out of the window.

As soon as the officer boarded the aircraft he heard screaming and cheering.

Defence Olivia Whitworth said: ‘He had genuine regret and remorse for these offences.

‘He does acknowledge the impact of the offences on other passengers and does not try to minimise the offence in this way. 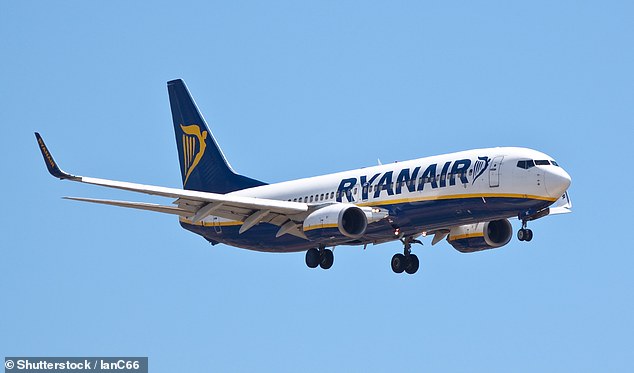 ‘He has a history of abuse and mental health problems and his behaviour is similar to that of anxiety and depressive disorder.

‘He has a daughter from a previous relationships and his current partner is pregnant.

‘He does not remember the offence. He is genuinely horrified by his own behaviour.’

Sentencing Judge Tina Landale said: ‘Travelling on an aircraft places special duties on passengers to behave and a small incident can cause catastrophic consequences.

‘Your behaviour began at the start of the flight and over three and a half hours you assaulted a passenger sitting next to you, you abused and threatened the staff who were carrying out their duties and you were loud and obnoxious.

‘You were violent to a number of passengers and the stewards who are responsible for keeping the passengers safe.

‘You ignored numerous warnings. You caused fear and distress to the other passengers, they were trapped in a small area thousands of feet above ground.

‘You deliberately drank and continued to drink from your own bottle of whisky, and you breached the rules designed to protect the safety of passengers and staff.

‘I have seen a small snapshot of what was going on in that cabin. You may have caring responsibilities for your grandfather but these offences are so serious that only immediate custody can be justified.’