Footfall at shops plunged more than a quarter last week as the brutal lockdown hammers the economy.

Total shopper numbers tumbled by 27.1 per cent in the seven days to January 9 compared to the previous week.

The grim figures from research group Springboard emerged as Rishi Sunak prepares to face MPs for the first time since announcing a bailouts to prop up businesses.

But he is facing calls to go even further amid warnings that many normally thriving firms are ‘fighting to survive’.

Treasury sources insisted Mr Sunak will not be announcing any new measures in his statement to the Commons this afternoon, billed as an ‘update’ after the dramatic events last week. 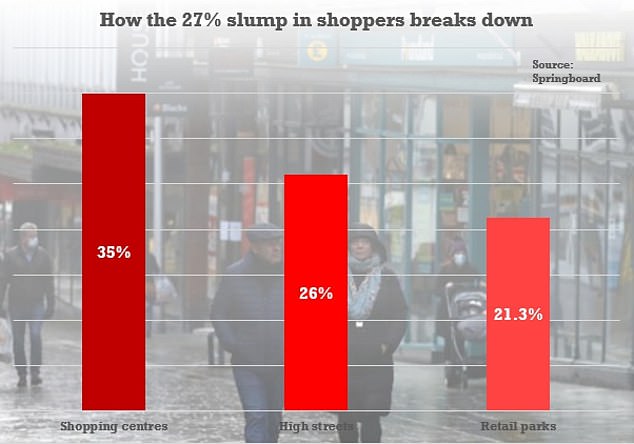 Overall, shopper numbers tumbled by 27.1 per cent in the seven days to January 9 compared to the previous week – with some retail locations hit harder than others 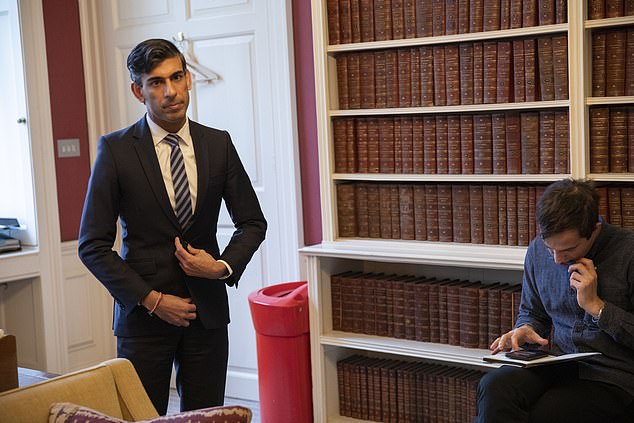 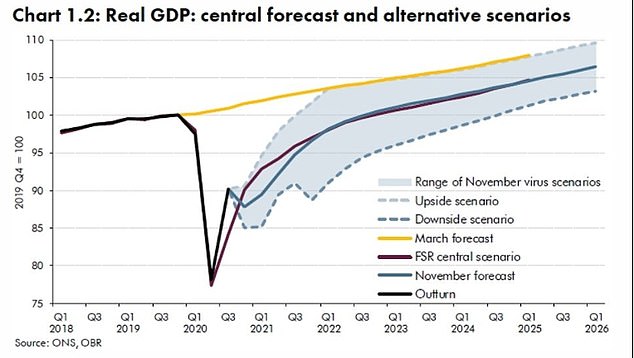 There are fears that the UK is now tracking the downside scenario set out by the OBR watchdog at the end of November, after mutant coronavirus forced fresh lockdown

Cost of the response for 2020-21 as given by Chancellor Rishi Sunak at the Spending Review in November.

Includes support for the NHS and other public services, plus test and Trace and ‘moonshot’, as well as furlough and self-employed schemes, tax relief and extra funding for devolved administrations.

Estimated cost of extending the furlough for another month to the end of April, announced in December.

The predicted cost of grants for businesses announced today for the third national lockdown, plus a discretionary fund for local councils to deploy.

The NAO’s estimate of the cost of Bounceback loans that will not be repaid due to fraud or insolvency.

Public sector funding for the coronavirus response already allocated to next year.

The costs of extra unemployment and other benefits due to the pandemic.

Additional borrowing expected in 2020-21 as a result of lost tax revenue due to the economic slump.

Springboard said the reduction in footfall was 35 per cent week-on-week in shopping centres, 26 per cent in high streets and 21.3 per cent in retail parks.

The organisation’s director During the first full working week of 2021 and introduction of lockdown 3.0, the reduction in footfall across UK retail destinations from the week before was nearly as great as that during early November when England entered lockdown 2.0.,” said Springboard director Diane Wehrle.

On a year-on-year basis, footfall across all UK retail destinations was 63.8 per cent lower than in the same week last year.

Last week Mr Sunak hinted furlough could be extended again as he announced another £4.6billion of bailouts for lockdown-stricken businesses – with economists warning of the ‘colossal’ hit from the surging pandemic.

Venues hammered by Boris Johnson’s dramatic decision to impose a new lockdown are getting one-off grants of up to £9,000 to keep them afloat over the next seven weeks.

Some 600,000 premises across the UK are set to receive the cash, while another £594million is being pumped into a ‘discretionary fund’ to support other firms affected.

Despite the running costs of the coronavirus response spiking above £300billion, Mr Sunak has pointedly refused to rule out keeping the massive furlough scheme beyond the end of April, merely saying he would ‘take stock’ at the Budget in March.

However, businesses warned that the package is not enough, amid pressure for VAT and rates relief to be kept in place to stop a wave of bankruptcies.

There are fears that the lockdown will slash GDP by up to 10 per cent in every month it is imposed – although the respected IFS think-tank has said the impact might be lower as businesses have adapted since the first squeeze in March.

The government’s finances are also under pressure with borrowing set to top £400billion this year, and Mr Sunak already having warned of a reckoning later to balance the books.

‘The message from businesses is clear: support is not remotely equal to the scale of the emergency,’ he said.

‘Many are excluded, grants do not properly cover the costs facing firms, businesses are staring at fast approaching cliff-edges in support and there is a massive issue of the debt burden they have accumulated.

‘The Government’s approach throughout this crisis means the UK is already facing the worst crisis of any major economy.

‘Rishi Sunak must start listening to the businesses fighting for survival and come up with a proper plan for the months ahead which matches the gravity of the crisis.’ 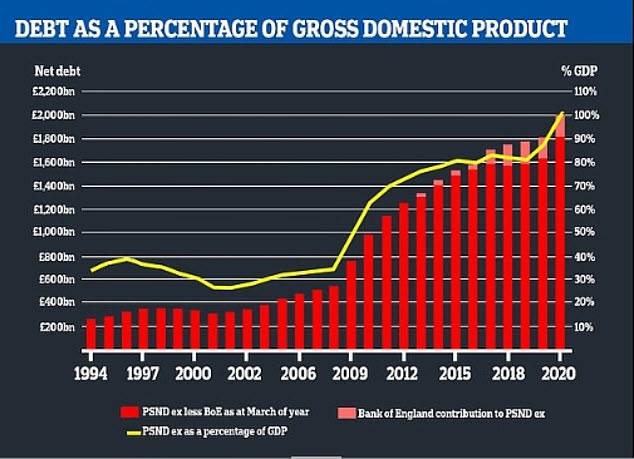 Alarm is growing at the state of the government’s finances, with borrowing set to be high for many years to come