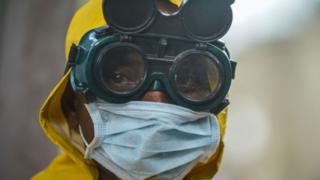 Average daily cases of coronavirus in Africa fell last week, according to the Africa Centres for Disease Control and Prevention (Africa CDC).

The director of Africa CDC, Dr John Nkengasong, said it was a “sign of hope”.

Dr Nkengasong said he was hopeful “that we are beginning to bend the curve slowly” but added that “it’s very, very early – we are dealing with a very delicate virus that spreads rapidly”.

“We take this news with cautious optimism,” he said, explaining that he didn’t want people to get complacent and stop trying to prevent the spread of the virus.

“We really want our population not to show what we call ‘prevention fatigue’, where we slow down on the measures that we are putting in place.”

He urged people to continue their efforts to prevent the spread of the virus, specifically saying that people needed to continue to wear masks, to maintain social distance and that more testing is needed.

Should Africa be celebrating?

After a sustained rise in the number of new confirmed cases of Covid-19 in Africa, the week-on-week drop is a welcome relief.

But the trend must be noted with a lot of caution.

Testing has increased steadily in the past few months to more than 10 million tests conducted so far, according to the Africa CDC.

That’s nearly 1% of the continent’s population.

But it’s still a mixed bag – South Africa leads in both the number of tests conducted and positive cases.

The WHO attributes the overall drop in newly confirmed cases in Africa to the decreasing number of positive cases observed in the country in recent days.

But lower testing rates in much of the continent means we are still not getting the true picture of the pandemic.

It may well be too soon to predict a sustained downward trend of newly confirmed cases in Africa.

Dr Nkengasong also said that more than one million tests had been conducted across the continent, with South Africa being one of the main countries to test people.

Recorded cases and deaths are relatively low compared to other parts of the word such as parts of Europe, Latin America and the US, which alone has more than 5,500,000 cases, but some experts warn that there may be many more cases than are recorded in Africa because of the lack of testing.

The spread of the virus appeared to be relatively slow in Africa in the early stages of the pandemic but the recorded rate of infection gradually accelerated, especially in South Africa.

More about coronavirus in Africa:

South Africa has 596,060 cases of coronavirus, according to data from Johns Hopkins University. That is more than half the cases across Africa and the fifth-most cases in the world.

The country’s cases have been falling, and this has been driving the fall in cases across the continent. At its peak, there were more than 12,000 daily confirmed new cases and that has fallen to an average of 5,000.

The next African country to feature on the list is Egypt, in 31st place in the world with 96,914 cases.