Two hippos in Belgium that vets noticed were “expelling snot” have been placed in quarantine after testing positive for the coronavirus, the Antwerp zoo said, in what appears to be the first known case of COVID-19 among the species.

It remains unclear how hippopotamuses Imani, 14, and Hermien, 41, contracted the virus, but the pair appear to be doing well and have no symptoms other than their runny, sticky noses. 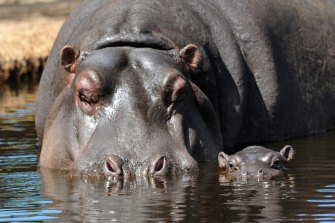 It is the first known case of COVID among hippopotamuses.Credit:Justin McManus

“To my knowledge, this is the first time in this species,” the zoo’s vet, Francis Vercammen, said, according to Reuters. “Worldwide, this virus has been reported mainly in great apes and felines.”

While hippos tend to have wet noses, vets decided to test the pair after they spotted the animals were producing thick mucus. The zoo said that staff, including the hippos’ handlers, had not displayed any symptoms and had tested negative for the infection.

The zoo, which is home to more than 5000 animals, currently operates with a range of measures in place to help stop the spread of the coronavirus – which has claimed at least 27,000 lives in Belgium.

Visitors must wear a face covering, abide by social distancing measures and all animal feeding demonstrations have been cancelled until further notice, according to the zoo’s official website.

Staff looking after the infected hippos in Belgium must wear masks, safety glasses and disinfect their footwear before any physical contact with the hippos, the BBC reported.

From dogs to tigers, leopards to deer, positive cases of COVID-19 among animals have been recorded during the global pandemic, raising questions about how infections are transmitted between humans and animals.

In November, three “beloved” snow leopards at a Nebraska zoo died of complications from COVID-19, about one month after testing positive for the virus. Two Sumatran tigers at the same zoo were also infected but made a “seemingly full recovery,” staff said.

Officials at the National Zoo in Washington, DC, said in September that a total of nine animals had tested positive for the coronavirus. They noted that some of the six lions and three tigers who had a positive result were lethargic and wouldn’t eat their meat.

In the United States, the Agriculture Department has authorised an “animal specific” vaccine which was given to seven orangutans, and several other primates at the National Zoo in October.

Other zoos have also began vaccinating animals against the virus.