A soldier who hacked a female colleague’s Snapchat account and blackmailed her with explicit photographs to ‘distress and humiliate’ her has been jailed for three years.

Private Michael Kewley, 22, of 4 Regiment Royal Logistic Core, threatened to send the images of the woman to her friends and family and told her she would be ‘punished’ unless she sent him more nude pictures.

He also sold the images online, offering 50 per cent discounts for the first customers, and in one month made at least £200 from the photographs.

Over a period of nearly a year he ‘systematically’ sent hundreds of messages to the female Private, who cannot be named for legal reasons, from various accounts. 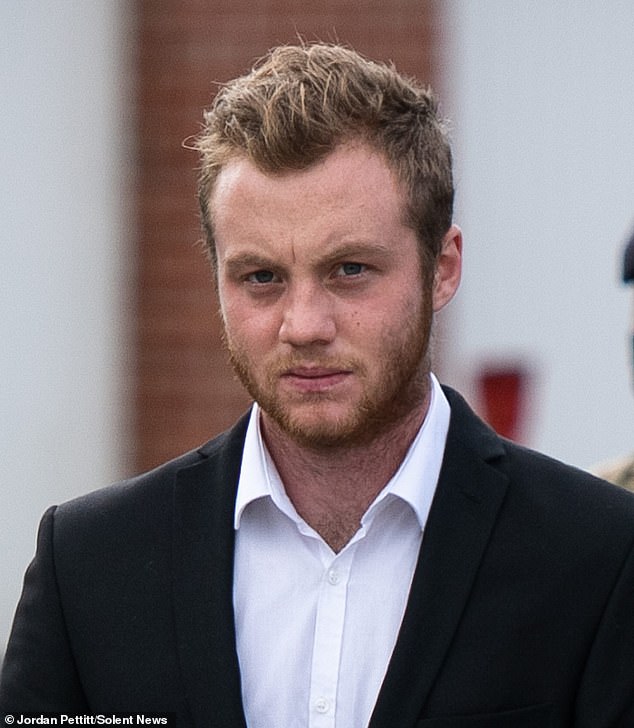 Private Michael Kewley (pictured outside Bulford Military Court in Wiltshire), 22, hacked into a female colleague’s Snapchat account and threatened to sent out explicit images of her to her friends and family

On Wednesday Bulford Military Court in Wiltshire heard that the woman was initially contacted on Facebook messenger by a ‘Joshscott1004’ who said that he had explicit photos of her.

He said that he would send them to all her friends and family unless she sent him more.

A few months later, an account called ‘Joshgibbbo’ messaged her, again requesting more explicit photos. She then began to receive daily messages from the fake accounts.

‘He said he would f**k her life up, that she would be punished, and that her and her parent’s family information would be stolen.

‘[He] created several accounts and hacked into Snapchat accounts and removed photographs that he has then used as part of the blackmail.

‘His conduct was intended to maximise distress and humiliation.’

Around this time a friend of the woman spoke to her to say that she had also been contacted by a ‘Joshgibbo’ who had tried to blackmail her.

She said that she had been sent naked images of the victim and was warned that she would also be hacked if she didn’t send him images.

Eventually, in an attempt to get the messages to stop, the victim decided to send a few explicit photographs.

She sent nine photos of herself in underwear and one in which she was completely naked.

She soon became aware that the photographs had been sent to ten people via her own Instagram account, which had also been hacked.

A short while later she received another Facebook request from an account under the name of ‘Sarah Glass’.

The account said it was ‘Josh and he was back’. He said that he would be adding her friends and sending out her photographs. 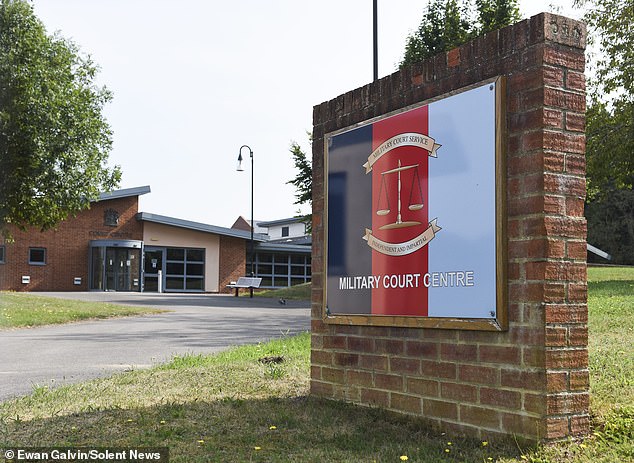 The woman was then contacted by an ex-partner who told her he had also been sent a message by ‘Sarah Glass’ including five or six images of the victim alongside the comment ’50 per cent off if you buy before midnight’.

Finally, after reporting the messages to the RMP and the police, IP address analysis of the phone was undertaken to establish who was accessing the woman’s social media accounts.

It led officers to Kewley’s house, which he shared with his wife. The ex-Private’s phone was found to contain 361 images and videos of the victim.

His bank statement from December 2018 also showed he was in receipt of £200 via PayPal for the pictures.

Kewley left the armed forces in January of this year.

Bulford Military Court, Wilts, heard a statement from the victim, which said: ‘It had an impact on my trust in people. The information he knew was information only people close to me knew about.

‘I had no idea who this person was and I became paranoid because I thought he was getting this information from my friends.

‘On one occasion he sent me a screenshot of a map showing he was at [my base]. He knew where I was.’

In mitigation, Andrew Stone, said: ‘[He] was not himself at this time, despite the fact that these events took place over a considerable number of months.’

‘You were clearly getting some satisfaction from this behaviour.

‘They [the victims] were clearly very distressed by your unrelenting behaviour and lost trust in their service colleagues.’

Kewley, who had pleaded guilty to two counts of blackmail and a third count of disclosing sexual photographs, remained emotionless as he was sentenced to three years and four months in prison.