Madrid: Spain has ordered nightlife establishments to close and banned drinking on the street in an effort to stem a coronavirus resurgence — measures that caused anger and dismay in the hard-hit hospitality sector. 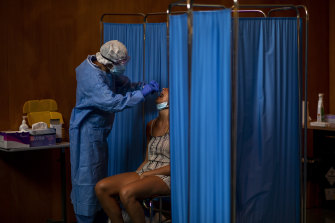 A medical worker tests a woman for COVID-19 in Barcelona this week.Credit:AP

Bars and restaurants will have to down their shutters by 1am as part of the new restrictions, Illa said.

The minister also advised against gatherings of more than 10 people and specifically warned young people not to gather outside to drink alcohol, a popular practice called "botellones".

"We cannot afford not to be disciplined," Illa said. "We cannot ignore the virus circulating among us."

The health ministry said the closure extended to nightlife establishments including discotheques, cocktail bars and dance halls in all Spanish territory, which would include popular holiday islands and beach resorts which depend on tourism.

Infections in Spain have risen in recent days following the end of Spain's tough lockdown seven weeks ago.

Friday's almost 3000 new cases, although little changed from Thursday, were about double the average in the first 12 days of August and brought the cumulative total to 342,813 – the highest number in Western Europe.

Germany on Friday declared nearly all of Spain, including the tourist island of Mallorca, a coronavirus risk region, further dashing hopes for a swift revival of mass tourism.

He said his group was planning to sue the government for what he sees as a rights violation that puts thousands of jobs at risk.

"We are indignant and angry," he said.

Some regions such as Galicia and the Canary Islands had curbed smoking in public areas earlier this week.

The increase in infections has led to worries the country could return to the grim situation it experienced in early April when the daily COVID-19 death toll approached 1000, but Illa played down such concerns.

"The situation is not comparable with March and April," the minister said, remarking that more young people were now becoming infected but patients in general were getting less severely ill.

To curb the epidemic, authorities imposed a strict lockdown in the whole of Spain in mid-March that lasted until late June and all but wrecked the country's tourism-dependent economy.

"There are many outbreaks and if measures are not taken we will have to lock down again," said Graciela Espino in Las Palmas, on Gran Canaria island.

California has become the first state in the US to surpass 600,000 confirmed coronavirus cases.

As of Friday morning, local time, there were more than 603,000 recorded cases. The state also has now reported more than 11,000 deaths.

Yet despite the grim numbers, there is growing evidence that the surge in infections and fatalities that began when California reopened its economy in May is beginning to slow. 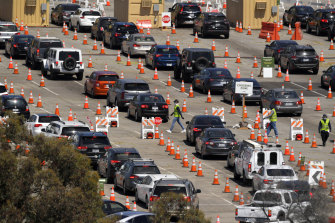 In Los Angeles County, the effective transmission rate of the coronavirus is now about 0.86 — meaning that every one infected person passes the virus to an average of 0.86 other people. Last week, the rate was at 0.91.

And statewide, an ensemble computer model known as the California COVID Assessment Tool estimates California's overall transmission rate is about 0.96.

Hospitalisations are also falling in many regions of California. Statewide, the average number of people who were hospitalised seemed to peak in late July, when an average of nearly 7000 people were in hospitals with confirmed coronavirus infections over a seven-day period; by Wednesday, that number had fallen to 5710.

"While our gains might feel slow and our future remains fragile, our success over the last three weeks is real," Los Angeles Mayor Eric Garcetti said on Wednesday. "We begin to see signs of light."

Canada is planning for a "reasonable worst case scenario" in which new waves of the coronavirus would intermittently swamp the public health system and send the death toll soaring, officials said on Friday.

Under the scenario, there would be a large peak later this year followed by a number of smaller peaks and valleys stretching to January 2022. Each peak would exceed the health system's capacity.

The system has so far managed to deal with the outbreak but evidence shows that if it does suffer breakdowns, "the mortality goes up really, really high", chief public health officer Theresa Tam told a briefing.

Tam declined to say what the chances were of the worst case scenario occurring.

Several of Canada's 10 provinces have reported higher numbers of COVID-19 infections as the economy restarts and restrictions on social gathering are relaxed.

"We are planning for a reasonable worst case scenario comprised of a large 'Fall Peak' followed by ongoing 'Peak and Valleys' in which resource demands intermittently exceed the … health system's capacity to manage," federal health officials said in a modelling forecast.

"Increases in infection rates are expected as we continue to support economic and social activities, even with appropriate controls in place."

The French health ministry reported 2846 new coronavirus infections over the past 24 hours on Friday, setting a new post-lockdown daily high for the third day in a row and taking the country's cumulative total of cases to 212,211.

The seven-day moving average of new infections, which averages out weekly data reporting irregularities, increased to 2041, doubling over the last two weeks, and going beyond the 2000 threshold for the first time since April 20.

Get our Coronavirus Update newsletter for the day’s crucial developments and the numbers you need to know. Sign up to The Sydney Morning Herald’s newsletter here and The Age’s here.