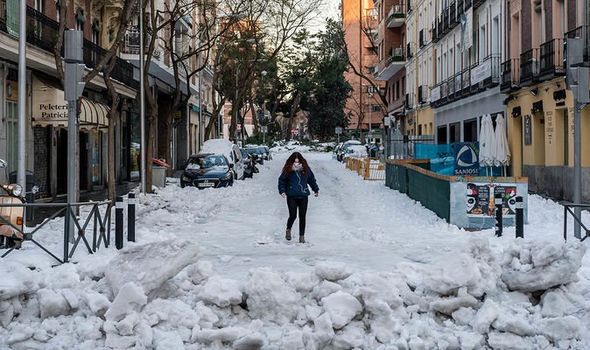 The older of the pair was described as “foreign”.

One ex-pat living in Madrid said: Hardware stores sold out of snow shovels pretty darned quick so some people were using dustpans and even baking trays to clear the streets.”

Twelve provinces remained on red alert this morning because of the low temperatures, which followed heavy snowfall last Friday and on Saturday causing chaos in Madrid and led to the closure of its international airport.

The extreme weekend weather was blamed for four deaths, including those of a couple whose car was washed away by a swollen river in Mijas on the Costa del Sol and that of a 54-year-old man whose car was found buried in snow in Zarzalejo north-west of the Spanish capital. 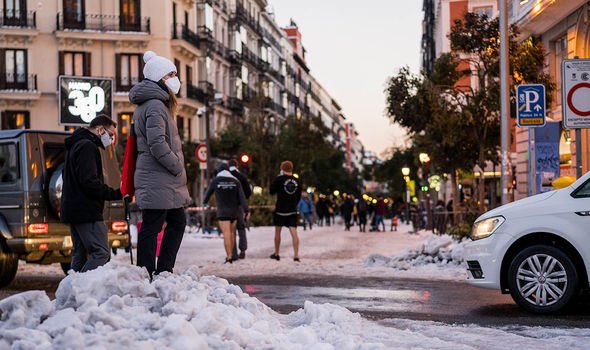 The mayor of a village in Toledo south of Madrid, where its residents woke up today to temperatures of minus 10 degrees Celsius, revealed they had been without mains electricity since Friday.

Villamuelas mayor Nelson Perez described the situation as “desperate” and said many people without access to generators had been using their cars to keep warm.

The village’s normal population of 730 doubled with the Christmas break as relatives living elsewhere returned to see loved ones and are now trapped because roads out are impassable.

Mr Perez, speaking late yesterday, said: “We are desperate, without electricity, hot water or heating since Friday and totally cut off.

“Entire families have had to end up trying to stay warm in their cars.

“The only chemist here is closed because the person who runs it doesn’t live in the village and can’t reach Villamuelas.”

In a message posted online this morning, officials added: “Today we will continue working to achieve what we need…electricity!

“Some mobile generators have been installed but they are a temporary solution and are low-quality and a large part of Villamuelas was left without electricity at 4am this morning again.” 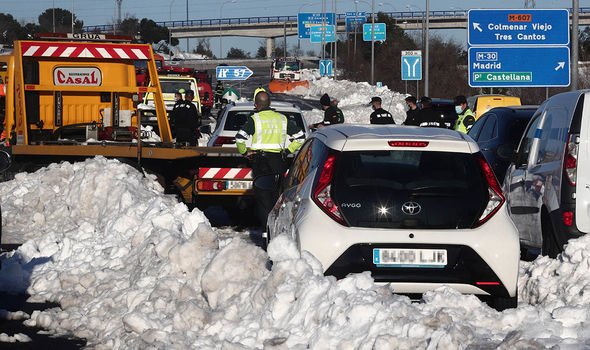 The army had to be brought in to help drivers trapped for more than 24 hours in their cars on the M40 motorway circling the city.

Sub-zero temperatures turned the 18 inches of snow that fell in Madrid, the heaviest snowfall since 1971, to ice on Sunday.

Schools have been closed and millions of workers told to stay at home.

Supermarket shelves have been left empty after lorries were preventing from reaching the Spanish capital.

Running the simplest of errands has become a risky business with pavements like skating rinks and the elderly relying on relatives and neighbours to help them.

Officials say that they do not expect the situation to improve until the end of the week when temperatures begin to rise.

Opposition politicians are calling on the government to declare Madrid a “disaster zone.”