Health authorities have linked 18 cases to the outbreaks, which were unknowingly spread by a nurse and doctor from the Princess Alexandra Hospital. 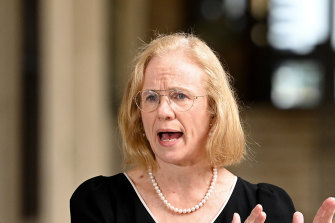 Queensland Chief Health Officer Jeannette Young said she did not blame the hospital for putting unvaccinated health workers into COVID-19 wards against her advice.Credit:Getty

From Wednesday, Queensland health workers must have received at least one vaccine dose before treating COVID-positive patients after the latest outbreaks, which triggered Brisbane’s three-day lockdown.

Queensland Chief Health Officer Dr Jeannette Young said inoculation of staff in COVID-19 wards was not mandatory from the beginning of the rollout because there were not enough vaccine doses available.

“It’s just so unfortunate that this outbreak has occurred when it did – another month, and all of the staff would absolutely have been protected,” she said.

Queensland has been stockpiling vaccine doses since the start of the rollout because the state government did not trust the consistency of supply from the Commonwealth.

Premier Annastacia Palaszczuk pointed to an incident earlier this month when there was “real concern” the Gold Coast University Hospital would have to stop vaccinating because a delivery had been cancelled, then went ahead.

“So you’re taking people off shifts to go and get the vaccine, you need to have the supply there,” she said.

But Australia’s Chief Medical Officer, Professor Paul Kelly, said no states or territories needed to hold vaccine supplies for second doses as the Commonwealth had made it clear from the beginning how many doses were coming to Australia, and how much was being distributed.

While there had been uncertainty around international shipments, particularly earlier AstraZeneca supplies, he said it was always the plan that the Commonwealth would hold back enough for second doses.

“For every person that has had a first dose of Pfizer, there is a second dose waiting in the contingency of the Commonwealth level, so there is no uncertainty about that,” he said. “There is no need for a state or territory to be keeping any vaccine aside for that purpose.”

Queensland Health Minister Yvette D’Ath said the state would continue to stockpile doses of Pfizer until a consistent supply of locally produced AstraZeneca vaccines were sent to states each week.

“We have to hold back our Pfizer doses to give them their second vaccination because we can’t be sure, and even the Commonwealth can’t be sure, when that Pfizer delivery is going to come to Australia,” she said.

“We don’t want to vaccinate all of these people and then turn around and say in 21 days’ time ‘sorry, we can’t give you your second vaccine, we don’t have enough’.”

Dr Young said she had been telling hospitals for several weeks not to let health workers who had not received the first jab treat COVID patients.

But she said she did not blame the hospital for putting unvaccinated health workers into COVID-19 wards against her advice.

“They have done their best but as you’ve heard, the number of cases has just ramped up at the same time as we’re trying to vaccinate people.”

Initially, the state wanted to vaccinate 37,000 workers dealing with COVID-positive people by April 4, but a surge in COVID-positive patients from Papua New Guinea has pushed the target higher.

The latest data, from March 25, shows 41,472 frontline workers had received the first dose and 4918 have been given both jabs.