New York: An elaborate sting operation has revealed that senior One Nation figures, including Pauline Hanson's chief-of-staff, sought millions of dollars in donations from the US pro-gun lobby to help them water down Australia's gun control laws. 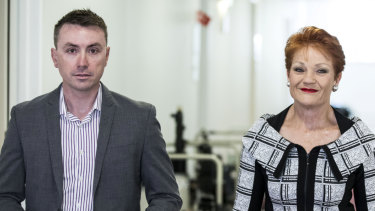 While in the US capital Ashby and Dickson met with representatives from the powerful National Rifle Association (NRA) and other conservative groups.

In a conversation with journalist Rodger Muller, the fake gun advocate, Dickson said that he was hoping to raise $10 million from Koch Industries, a leading funder of US conservative causes.

Ashby said they should aim higher and try to raise $20 million.

"It's going to get down to money at the end of the day," Dickson is recorded telling the Koch representatives. 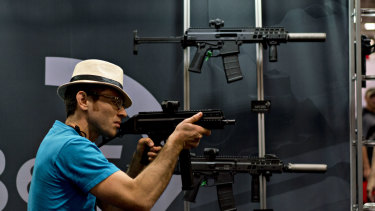 An attendee holds a rifle at the company\’s booth during the National Rifle Association (NRA) annual meeting in Dallas last year.Credit:Bloomberg

"We can change the voting system in our country, the way people operate, if we've got the money to do it.

"The ingredients are there, we just don't have the petrol to put in the engine.

"So whatever you can do would be fantastic."

Ashby is filmed saying it would "f-cking rock the boat" if One Nation's meetings with US pro-gun were made public.

Al Jazeera does not present evidence that One Nation ended up receiving funds from the NRA, Koch Industries or other US groups.

In one meeting the NRA's media liaison Lars Dalseide offers Ahsby and Dickson advice on what to say to gun control advocates after a mass shooting.

"How dare you stand on the graves of those children to put forward your political agenda?" Dickson advises. "Just shame them to the whole idea."

He continues: "It's like, 'If you, if your policy, isn't good enough to stand on itself, how dare you use their deaths to push that forward?!'"

One Nation has not responded to the documentary, which aired on Sunday night.

Muller's undercover operation was so elaborate that he set up a pro-gun rights group named Gun Rights Australia with a detailed website.

On it the reporter described himself as a "family man, a successful business man and rural property owner".

We know about fevers, persistent coughs and losing your sense of taste, but eyesight has until now not been a major consideration for those who…