School pupils in Wales will continue to wear face coverings until at least the February half-term before councils decide locally what measures will remain in place, the Welsh Government has announced.

Education minister Jeremy Miles said the wearing of face coverings had been an ‘important contribution’ to ensuring schools remain safe and the current guidance would remain in place until a review on February 10.

If Covid-19 transmission rates continue to remain low then after the half-term break schools and councils will decide locally what measures will remain in place. 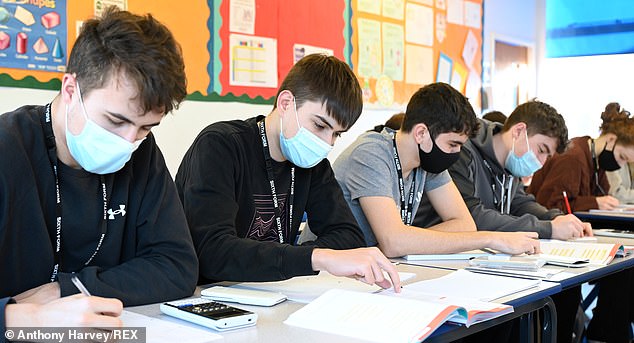 School pupils in Wales will continue to wear face coverings until at least the February half-term. Pictured: Students at Hailsham Community College in East Sussex

Mr Miles, who was speaking at a Welsh Government briefing, said a final decision will be announced at the next review of the regulations, which is due to take place on February 10.

He said: ‘The wearing of face coverings in schools has been an important contribution to being able to ensure that we make sure schools remain safe places to learn and that we limit transmission of Covid-19 in schools.

‘The current guidance requires that all staff and secondary learners wear face coverings not only in communal areas but also in classrooms and that is the guidance which is being continued.

‘There will be an opportunity to review that of course on February 10 but my expectation at the moment is that that would extend until the end of this half term.

‘My hope and intention is – subject to the data – that by the beginning of the new half-term we will be seeing schools operating fully in accordance with the local Covid control frameworks, including in relation to face coverings.’

Schools that have staggered start and finish times can continue to do so until half-term, but after half-term it is expected all schools will revert to their normal timetable, Mr Miles added.

The minister said that by announcing changes now it would give schools and local authorities the time to plan, ahead of the half-term break.

‘We’ve been very clear from the start that it is a very high priority for us as a Government to make sure that learners can continue to be in school, learning face to face,’ he said.

‘And by taking that cautious, measured approach we have the best chance of making sure that happens. 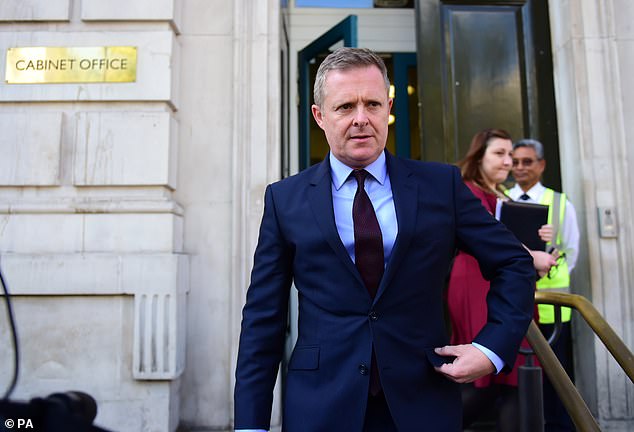 ‘I would just say as well that, even at alert level zero, face coverings are worn in a number of different settings and so in that context we’ll be asking staff and secondary learners to continue wearing them for the time being.’

‘The education minister’s statement today reinforces the need for a slow and steady approach and we will work with Government officials to ensure schools have clear guidance in place once mitigations begin to lift,’ she said.

‘If high levels of disruption continue in our schools and the relaxation of any mitigations compounds the problem, we will be the first to call on the Government to move swiftly to rethink the approach.

‘No-one wants to see mitigations in schools, but the priority must be to keep schools open as safely as possible for staff and learners.’

Eithne Hughes, director of the Association of School and College Leaders Cymru, said: ‘We welcome the endorsement of the ‘slow but steady’ approach we have been advocating.

‘We still have reservations about the effectiveness of the woolly measures in the framework itself, but schools are at least familiar with them and have great experience to fall back on in dealing with high levels of absence among both learners and staff.’

Debbie Thomas, from the National Deaf Children’s Society Cymru, said: ‘Public health should always be a priority, but face coverings can leave deaf learners unable to understand their teachers and isolated from their friends and classmates.

‘With no definite end in sight for face coverings, they must not be left to struggle on alone.’

Last week Welsh First Minister Mark Drakeford announced all major coronavirus restrictions would be lifted in Wales over the next two weeks.

The Welsh Government will reopen nightclubs, end the rule of six in pubs and lift the 50-person limit on outdoor events.

Mr Drakeford used a press conference to set out his plan for Wales to move from alert level two to alert level zero by the end of January if the public health situation continues to improve.

The final stage of relaxing the rules will then take place on Friday January 28 when the remaining curbs on indoor activities will be lifted.

The rule of six, table service and 2m social distancing will no longer be required in hospitality. This will allow nightclubs to reopen.

The Covid Pass will be required for entry to nightclubs, events, cinemas, concert halls and theatres. Meanwhile, the legal requirement to work from home will be dropped.

Self-isolation rules for people who test positive for Covid and the wearing of face masks in most public indoor settings will remain in force after January 28 with all measures then due to be reviewed every three weeks, starting from February 10.