Sudan’s armed forces stage coup and place prime minister under house arrest after he refused to back it: Military detains civilian leaders, sparking protests in the streets

Sudan’s prime minister has been arrested and taken to an ‘unknown location’ in what civilian leaders have described as a military coup in the African nation.

Hamdok, who survived a failed coup attempt just last month and an assassination attempt last year, was leading Sudan’s transition from decades of autocratic and military rule towards democracy following a revolution in 2019.

Trade unions which were central to that revolution denounced what they called the military’s attempt to seize back control of the country, and urged people on to the streets for fresh protests. 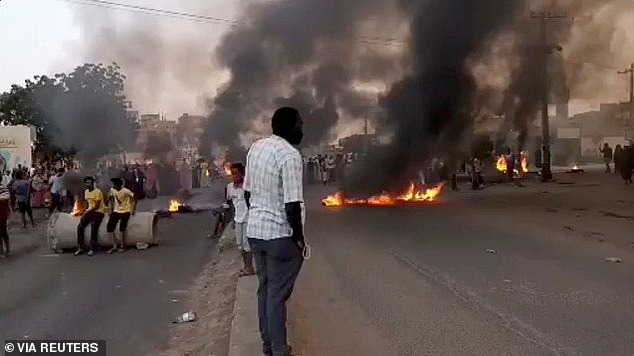 Protesters burn tyres on the streets of Khartoum, the capital of Sudan, amidst a suspected military coup with civilian leaders rounded up and arrested 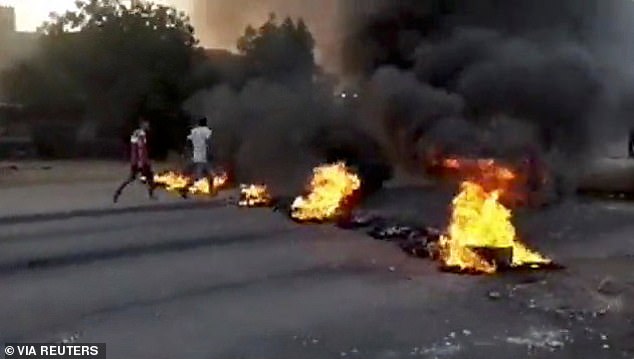 Crowds were subsequently pictured in the capital Khartoum burning tyres while demanding the release of the prisoners.

That revolution overthrew decades of rule by Omar al-Bashir, a former military general, and then a military council tasked with reforming the country.

Revolutionaries then handed power to a transitional council run by both military and civilian leaders tasked with rewriting the constitution and then holding elections, due for November 2022.

Tensions between civilian and military leaders have been evidence since the start of the transition, but have reached a head in recent months as deadlines for the handover of key powers from the army to civilians loomed.

Just last month, the government said it had thwarted a coup attempt by soldiers loyal to al-Bashir which had targeted Hamdok.

Hamdok subsequently gave a speech calling the coup attempt ‘the worst and most dangerous crisis that not only threatens the [democratic] transition, but threatens our whole country.’

His arrest comes just two days after a Sudan faction calling for a transfer of power to civilian rule warned of a ‘creeping coup’, during a press conference that an unidentified mob attack had sought to prevent.

Sudan has been undergoing a precarious transition marred by political divisions and power struggles since the April 2019 ouster of president Omar al-Bashir.

Since August 2019, the country has been led by a civilian-military administration tasked with overseeing the transition to full civilian rule.

But the main civilian bloc — the Forces for Freedom and Change (FFC) — which led the anti-Bashir protests in 2019, has splintered into two opposing factions.

‘The crisis at hand is engineered — and is in the shape of a creeping coup,’ mainstream FFC leader Yasser Arman told the Saturday press conference in Khartoum.

‘We renew our confidence in the government, Prime Minister Abdalla Hamdok, and reforming transitional institutions — but without dictations or imposition,’ Arman added.

Tensions between the two sides have long simmered, but divisions ratcheted up after a failed coup on September 21 this year.

Last week tens of thousands of Sudanese marched in several cities to back the full transfer of power to civilians, and to counter a rival days-long sit-in outside the presidential palace in the capital Khartoum demanding a return to ‘military rule’.

Hamdok has previously described the splits in the transitional government as the ‘worst and most dangerous crisis’ facing the transition.

On Saturday, Hamdok denied rumours he had agreed to a cabinet reshuffle, calling them ‘not accurate’.

The premier also ’emphasised that he does not monopolise the right to decide the fate of transitional institutions.’

‘Feltman emphasised US support for a civilian democratic transition in accordance with the expressed wishes of Sudan’s people,’ the US embassy in Khartoum said.

Analysts have said the recent mass protests showed strong support for a civilian-led democracy, but warned street demonstrations may have little impact on the powerful factions pushing a return to military rule.