London: Rishi Sunak has announced his candidacy to be the UK’s next prime minister, promising to govern with integrity, professionalism and accountability – a clear swipe at the chaos that brought down Boris Johnson and Liz Truss in the space of three months.

Sunak said in a statement that the UK faced a “profound economic crisis.” 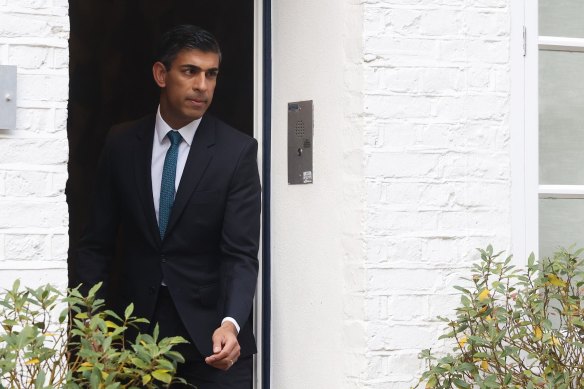 Rishi Sunak leaves his home on Friday. He declared his candidacy for the top job on Sunday.Credit:Bloomberg

“I want to fix our economy, unite our party and deliver for our country,” Sunak said.

“There will be integrity, professionalism and accountability at every level of the government I lead and I will work day in and day out to get the job done.”

Sunak also vowed to deliver on the “promise of the 2019 manifesto.”

One of Truss’ key attack lines during the summer leadership campaign was that Sunak had breached manifesto promises when he raised taxes to cover COVID-19 pandemic costs. The manifesto had not, in fact, been drafted before the virus left China and infected the world.

Sunak had on Saturday received the public backing of more than 100 MPs – the threshold required to nominate for the job by 2pm on Monday local time.

His main rival could be Boris Johnson, who on Sunday was still yet to confirm if he would mount a comeback campaign, although his supporters were trying to garner the backing of 100 MPs.

Johnson and Sunak spoke on Saturday night, reportedly about the need for party unity, rather than any deal that would see one candidate given a coronation on Monday.

Cabinet minister Jacob Rees-Mogg told the BBC that he had been speaking to Johnson.

But looming large in the minds of MPs weighing up the candidates – who also include outlier Penny Mordaunt – is the ongoing parliamentary inquiry into whether Johnson misled the House of Commons as prime minister over the parties held at Number 10 during lockdown.

James Duddridge, one of the Conservative MPs speaking on behalf of Johnson’s unofficial campaign, said the former London mayor, who was ousted from office by his party just three months ago, had appeared smartly dressed on Sunday morning for a meeting with MPs.

“Boris on good form at the 8am meeting with MPs,” he tweeted. “In a first for Boris he was rather smartly dressed!

“He made it very clear the privileges committee must and will be allowed to get on with their process.

“He will cooperate fully. G8 2c the boss reach out to the other camps.”

If Johnson receives 100 MP nominations and makes the ballot, the vote will go to party members, who are widely expected to back a Johnson comeback.

However, Sunak has received the key endorsements of significant right-wing figures, including Steve Baker, one of chief Brexiteers, and Trade Secretary Kemi Badenoch, who is widely regarded as a future leader and a darling of party members.

Voting begins on Monday. If more than two candidates nominate, the result of the membership ballot will be known on Friday.