The yearly rush of shoppers to the Boxing Day sales in Sydney has slowed to a trickle, as wary shoppers heeded the NSW government's advice to stay away from the CBD due to fears of growing coronavirus transmission.

Retail workers set up barricades, marked out COVID-safe distances for shoppers in queues and swept floors in anticipation of the usual early morning influx, but Pitt Street Mall was all but deserted on Saturday morning. 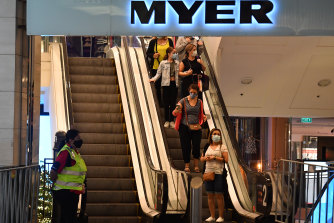 Shoppers who ventured into the CBD for the sales were urged to wear a mask.Credit:Sam Mooy

Premier Gladys Berejiklian's remarks discouraging shoppers from going to the sales in central Sydney is expected to be a blow to struggling retailers who were expecting nearly $20 billion to be spent by January 15.

"We do ask everybody to limit any activity in the CBD," Ms Berejiklian said on Christmas Day, amid concerns about shoppers from across Sydney mingling in crowded stores and the city's most recent coronavirus outbreak.

Seven locally acquired cases of COVID-19 were recorded in NSW on Christmas Day. Three positive cases linked to the Paragon Hotel’s sports bar near Circular Quay have prompted warnings for people who have been in the CBD. 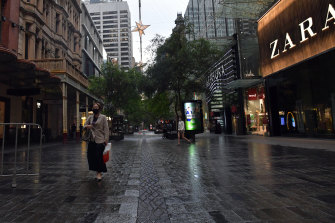 "We know this is not the easiest message to give to those retailers, but we want to discourage people going to the CBD tomorrow," Ms Berejiklian said on Friday.

Shoppers who decided to go into the CBD for the sales were urged to wear a mask.

Paul Zahra, the chief executive of the industry peak body the Australian Retailers Association, said on Christmas Day that the government's updated advice to avoid the sales in the CBD was "incredibly disappointing".

“While we support the NSW government in their response to keep the community safe, there’s no doubt this directive will have an effect on Boxing Day trade," Mr Zahra said. 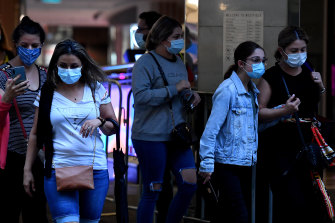 The retailers' association had previously predicted shoppers would spend up to $19.5 billion between Boxing Day and January 15.

However, many retailers are expected to offer online discounts as well as in-store markdowns, and many people have begun online shopping for the first time or increased their online shopping this year.

Catch all the day’s headlines

At the end of each day, we’ll send you the most important breaking news headlines, evening entertainment ideas and a long read to enjoy.  Sign up to The Sydney Morning Herald’s newsletter here, The Age’s here, Brisbane Times’ here, and WAtoday’s here.