Islamabad: Taliban intelligence officials threatened an Australian journalist with jail unless she publicly apologised for reporting on alleged abuses by the group, she has said.

Lynne O’Donnell was held in Afghanistan and made to tweet apologies for past articles that alleged the Taliban used teenage girls as sex slaves and forced young women into marriage. 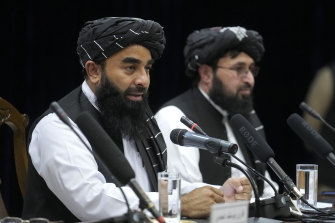 Zabiullah Mujahid, left, the spokesman for the Taliban government, speaks during a press conference in Kabulon June 30.Credit:AP

She was also forced to record a video clip declaring that she had not been coerced into making the apologies.

The experienced Afghanistan correspondent disclosed her ordeal on Wednesday after she had safely left the country.

“Tweet an apology or go to jail, said Taliban intelligence,” she said.

“They dictated. I tweeted. They didn’t like it. Deleted, edited, re-tweeted. Made video of me saying I wasn’t coerced. Re-did that too.” Her detention is the latest example of a Taliban squeeze on journalism which, along with the country’s economic meltdown, has helped kill off much of its once vibrant media industry.

The Taliban’s restored Islamic Emirate has now turned its attention to foreign journalists, deporting or detaining reporters they accuse of criticising the Islamist regime.

O’Donnell, a columnist with Foreign Policy magazine and former bureau chief for the Associated Press and the French news agency AFP, was forced to make a series of tweets on Wednesday morning.

Their stilted language alerted friends and colleagues, who feared she was either writing under duress or her social media account had been hacked.

“I apologise for three or four reports written by me accusing the present authorities of forcefully marrying teenage girls and using teenage girls as sexual slaves by Taliban commanders,” she wrote. “This was a premeditated attempt at character assassination and an affront to Afghan culture. 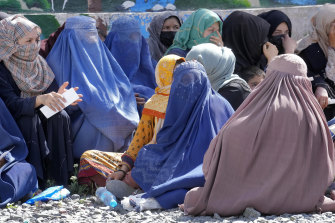 In a hardline pivot, the Taliban have ordered all Afghan women to wear head-to-toe clothing in public.Credit:AP

“These stories were written without any solid proof or basis, and without any effort to verify instances through on-site investigation or face-to-face meetings with alleged victims.”

The United Nations has said that the Taliban’s first 10 months in power had seen them commit abuses including extra-judicial killings, torture, arbitrary arrests and inhumane punishments. The UN’s latest survey of human rights abuses in the country said violence had fallen overall since the Taliban seized power, but they had targeted former members of the security forces, human rights activists and journalists.

Some 160 members of the former government or its security forces had been killed, despite Taliban assurances that they would be granted an amnesty and spared reprisals, the study found.

Women had also been increasingly sidelined from public spaces, with edicts removing them from work, transport and education.